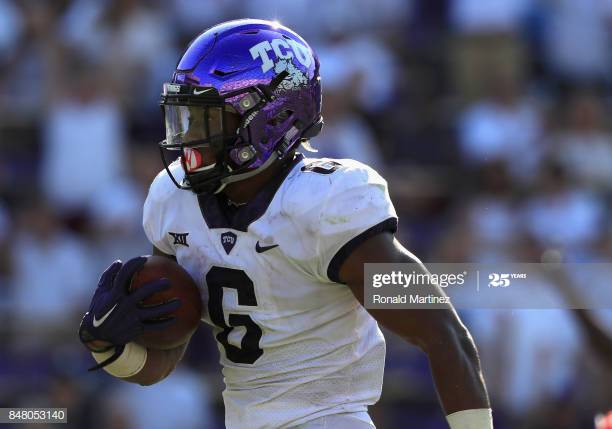 Give him the football and you can bet that TCU running back Darius Anderson is going to make something happen. The TCU running back is a smooth cutback runner who glides into holes with ease. Once he hits the second level, Anderson has a variety of options on how to create additional yardage.

Before getting into Anderson’s ability to generate yardage at the second level, let’s discuss his play in the trenches. The TCU running back bounces off defenders like a pinball. His contact balance is highly impressive for his size and stature. Anderson puts up a ton of fight as there is no quit in him. He can break tackles and that is trouble for defenses because once he hits the second level, the running back can use his speed to really make teams pay. Watch as the TCU running back breaks two tackles and is then off to the races, leaving the opposing defense in the dust.

The TCU running back is not all flash and glamour though as he can also bring the thunder. While he is known for his playmaking ability, his contact balance and ability to break tackles may be his trump card. Anderson is capable of grinding out additional yardage as he makes quick use of early tackle attempts. If having heart was a measurable trait, Anderson would score an A+. He rarely goes down on first contact and will continuously fight to fall forward.

Anderson can not only break a defense’s will with his physical running style but he can also embarrass defenses with his lateral agility. The TCU running back can make defenders look absolutely foolish as they attempt to square him up. Often times they end up attempting to tackle thin air and an example of that is displayed above. Once he reaches the second level, Anderson puts two Purdue defensive backs on his highlight reel as one has their ankles broken while the other ends up trying to wrap up thin air.

As for the type of runner that Anderson is, he is a very fluid cutback runner who can manipulate second level defenders. He does a good job manipulating the movement of linebackers and defensive backs making them flow a certain direction before cutting back and picking up maximum yardage. On the play above, Anderson flows towards the left side of the line and the defense follows but they are just playing right into his trap. Thanks to his smooth ability to change direction on a dime, the TCU back cutbacks, makes one man miss and walks in for an easy touchdown.

Here is Anderson’s cutback ability on display again. Watching him cutback is like watching poetry in motion. Everything runs in sync and the results are often spectacular to watch. Anderson presses the left side of the line of scrimmage and the second level defenders follow but he is just too quick and shifty to catch up to once he cuts back. The TCU running back also has a high level of burst as he can push the gas pedal to easily get into his second gear.

Part of being a good running back is understanding how to utilize your blockers to their fullest potential. This is a very critical process as it can make the difference between a marginal gain and a big one. Anderson shows a good understanding of this as he processes the positioning of his own blockers and the opposing defense. Watch as he presses the line of scrimmage inside, drawing in the defense before bouncing it outside, using his blockers and athleticism to get into the end zone.

While Anderson does not have an extensive history as a receiver, it is an area of his game that continues to progress. He recorded 22 receptions last season and had at least one reception in every game that he played in. With his playmaking ability, this is a player who teams are going to want to get the ball to, especially in space.

Now the jury is still out on whether Anderson can be your every down bellcow-type running back. He does well in space but will he be able to produce against a lot of loaded fronts in the NFL? He was exceptional at cutting back and bursting through open holes in college but whether he has the vision to generate yardage in the trenches at the next level is another mystery. Another question is his durability. He has been dinged up a few times during his tenure at TCU.

Anderson is still a running back I like. He has electric feet and shoots through holes. He is an excellent cut back runner who has the speed, agility and most importantly the physicality to create more than enough flash for the position. The TCU running back reminds me slightly of former NFL running back Arian Foster with his cut back style. His ceiling could be an effective spot starter with room to grow while his floor seems to be a change of pace/third down back who can produce in space.