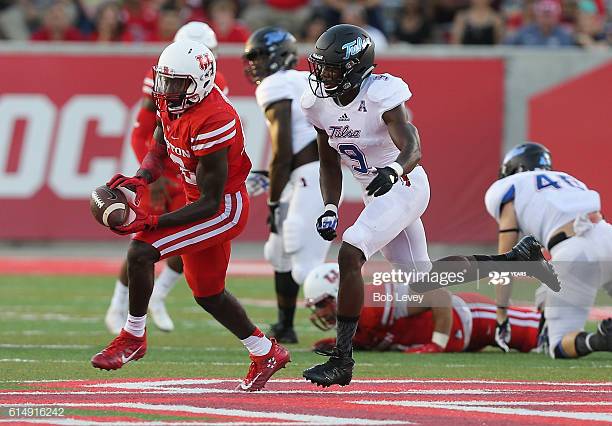 Here is a height/weight/speed defensive back with a rocked up physique with good ball production while at Tulsa. He has experience playing on both sides of the field in Zone and Man coverage schemes. As a bonus he has special teams experience with 4 career blocked kicks.

Against the pass, he played in a variance of coverages.  In Press coverage, he shows good patience to let the receiver commit to his move before reacting. When using a jam, he shows good physicality to disrupt the release and stay even through the stem. Without a jam he reads the WR and times the opening of his hips well to stay in stride with good agility to mirror in the short area. In Off Man, he has a smooth pedal and in Zone he shows good route awareness jamming WR’s coming through his area while reading the QB and is has game awareness to always flow to the ball. He was also used in Trail Man coverage and can mirror to stay under the routes. On deep routes he shows good speed and body positioning to stay in phase down the sideline or on fades in the red zone.  He attacks screens and will work to go through or around blockers to get to the ball.

At Houston, he’s at the bottom of the screen and will read the swing screen coming his way, uses play strength to get off the block and put him in position to make the stop.

Vs SMU, playing against the fade at the top of the screen he uses a good jam and rides the hip of the WR through the play. He doesn’t get his head around but plays the WR and chops as the ball arrives

Vs Oklahoma State, at the top of the screen his receiver doesn’t release so he reads the QB and get into the throwing lane to make the INT

Vs Oklahoma State, at the bottom in Press coverage he doesn’t get a jam but is able to open and put himself in perfect position up the sideline.

Against the run, he shows a very good willingness and good physicality to do his part.  He is willing to take on pulling offensive lineman or TE’s on the edge to force plays back inside. I saw him fill in the C gap, attack on the edge and uses his hands well to keep blockers at bay.

At Michigan State, he’s on the edge to the left uses good hand placement to stack and shed the blocker to put him in good position on the outside.

Vs Oklahoma State, he’s at the top of the screen and is showing blitz but holds off to read the play before avoiding the block and making the tackle.

On in breaking routes on the short and intermediate levels while in Man coverage he allows too much space making it harder to undercut and defend the routes and is too grabby trying to limit the separation.  He has adequate COD to click and close on the ball while playing off of the receiver on comeback route or underneath routes in Zone. On the deep ball, he needs to do better getting his head around to find the ball. Quicker receivers can open up space at the LOS forcing him to play catch up and didn’t show a closing burst to minimize the gap. While in Man coverage he was highly focused on his man and was late to recognize runs coming his way. When tackling in the open field he needs to breakdown sooner to limit missed tackles.

At Cincinnati, he’s at the bottom of the screen in Man coverage. He’ll take a false step forward with his left foot and immediately opens his outside hip allowing the receiver to open up a lot of space inside.

At Michigan State, here are two routes from the top of the screen. A comeback and a dig route on consecutive plays and he has a hold of the receiver on both routes.

I was pleasantly surprised by Robinson’s tape.  He has the measureables teams like with good explosion numbers including an 11 foot broad jump and 22 bench presses which was tied for the best among DB’s at the Combine. I like his physicality when playing Press coverage and should be able to disrupt most WR’s at the LOS. If he can improve on his click and close ability in Zone, his tackling in space and limit his grabby hands I can see a future starting CB.

He would fit best in a scheme that played a lot of Press Man and Zone coverages either as an outside corner or maybe initially, with his aggressiveness in the run game, in the slot. I’ve seen him listed as a mid to late day 3 pick but I think he goes earlier.