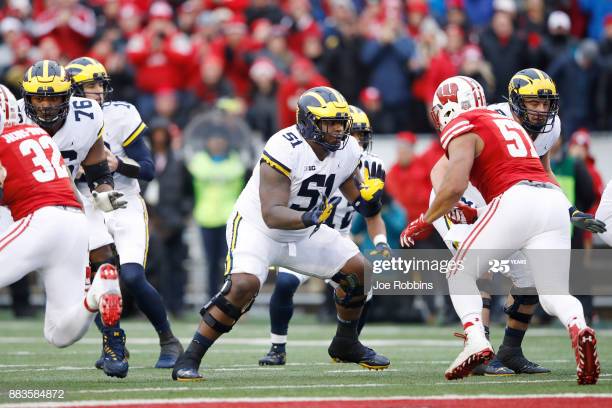 – Thick body with good length for frame (33 1/8 inches)
– Excellent play strength, strong upper body able to take control of blocks in run and pass game
– Shows proper base and technique out of stance, sits in his stance and able to absorb bull/power rushes in pass game, keeps hands tight in run game
– Understands leverage and runs his feet
– Good explosiveness out of his stance, able to function in space, effective puller who gets to his spot ahead of the back and capable of hitting a moving target
– Athletic enough to cutoff backside or reach frontside, hard worker without a lot of wasted steps or movement
– Active eyes when uncovered in pass game, looks for work and able to pick up blitzers/stunts
– Lots of grip strength who keeps feet moving laterally in pass pro
– Snaps appeared consistent and accurate
– Showed some versatility and experience starting at center and guard
– Good starting experience, especially for underclassmen
– One of the youngest players in this class, room to grow

– Above average but not an elite athlete, will function best in a power/gap scheme as opposed to zone scheme where he can win with strength
– Wasn’t a dominant player in any one area, solid but rarely “wowed” during a rep
– Tendency to lean into blocks and prone to falling off when they make a move and try to disengage
– Vulnerable to getting off balanced and losing his block as frontside on combos when adjacent linemen engages
– More likely to miss and not pick up stunt/blitz when covered and engaged
– Has to stay consistently square to block, not open gate and let linemen through

– 31 career starts
– 26 at center, five at right guard (started RG freshman season before playing center in 2018 and 2019)
– Won’t turn 21 until June
– Four star recruit out of HS, widely regarded as the top center coming out
– Father killed in hit-and-run when Ruiz was eight

From a box-checking standpoint, Ruiz certainly profiles like a future Pittsburgh Steeler. Only 20 years old, declaring as a true junior. Yet he has good experience, 31 starts, with center/guard versatility. He fits the “hearts and smarts” component, well-liked, known as a hard worker, with the backstory of his father killed when he was young to make him a guy everyone is rooting to see succeed.

And his tape is worthy too. Ruiz has excellent functional strength, holding his own in pass protection and in the run game. My favorite rep I watched was this one in pass pro, maintaining his base while sliding laterally. He’s the center, #51, in all these clips.

Ruiz also excels in the run game. Michigan liked to pull him and get him in space. He shows snap out of his stance, even harder for a center, and he can hit his target at the second level.

Loved this reach block, getting his head across and doing just enough to seal the defender to let the back through the hole.

His negatives aren’t very notable or frequent. He can fall off blocks and I want to see him stay square and make sure he doesn’t open up his hips. That’s where he can get into trouble. He was winning this rep before his right hip opened up, his body turned, and the d-linemen got the lane. Could’ve worked a better angle here to defend the spin move.

I will say he isn’t dominant in any one area. There are better run blockers and pass protectors. But it’s hard to find his combination of both and overall, he’s a very good prospect who fits best in a man/gap scheme.

Games Watched: at Wisconsin, vs Notre Dame, at Maryland, vs Michigan State