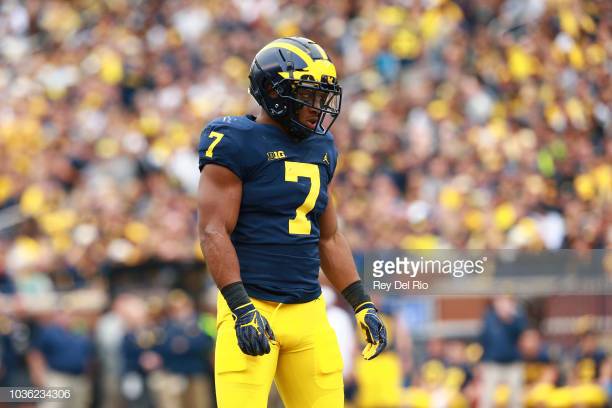 -Versatile chess-piece defender
-Asked to wear many hats at Michigan and thrived in multiple roles snap to snap
-Experience playing off-ball LB, end-of-line defender, slot corner, box safety and deep safety under Don Brown’s guidance
-Tenacious defender that won’t back down; plays with a massive chip on his shoulder
-Possesses good range and a relentless motor
-Knows how to keep himself clean rushing off the edge and is an effective blitzer
-Loose, explosive hips
-Smart football player that reads and reacts quickly

-Small, maxed-out frame
-Gets overpowered in the run game and isn’t strong enough to shock and shed in the box
-Heavy feet in man coverage and back pedal is rough, clunky
-Gets grabby in coverage due to lack of suddenness and agility
-Lacks necessary play strength to live in the box at the next level
-Hesitant to fill gaps in the box against the run due to strength issues
-Probably needs to cut weight heading into the pros to find a true position
-Definition of a ‘tweener prospect

Today’s NFL is changing so rapidly; it feels like it’s week to week that the game is different from previous iterations.

Really though, it’s mainly snap to snap that the game is different, and true chess piece players – especially on defense – are becoming more and more valued by new-age coaches.

Michigan “viper” (and Pittsburgh native) Khaleke Hudson is exactly that. During his four years at Michigan, Hudson played the “viper” role in Don Brown’s defense with the Wolverines.

He was asked to wear a number of hats on a stout defense, including slot corner, deep safety, box safety, end-of-line defender, and inside linebacker. Despite being undersized for a handful of those roles, Hudson more than held his own in the Maize and Blue.

When I saw explosive, loose hips, the clip above is exactly what I mean. Watch the pop in the swivel and the explosion backwards to get into the passing lane. Now, his height deficiency does pop up here because if he were a few inches taller that’s a pick.

Instead, it’s an unlucky tipped pass that the Iowa receiver runs underneath for a big gain.

Coverage in space, especially against tight ends, can be an issue for Hudson. Too often in his back pedal he shows heavy feet and is a touch slow to react, especially on in-breaking routes. That’s why he needs to get grabby because his change of direction and short-area agility in coverage isn’t up to snuff.

That said though, he sure has a knack for carrying tight ends up the seam.

I love his anticipation on this seam route by current Baltimore Ravens tight end Hayden Hurst. Hudson flips his hips early and gets in phase with Hurst, forcing the first-round tight end to try and play through him. Hudson’s positioning leads to an interception too.

Playing the end-of-line defender, Hudson is definitely undersized and overpowered a lot, but he plays with his hair on fire and fires for every blade of grass. You simply can’t teach that. The effort and motor are superb.

The effort and want-to is excellent here. Against Florida to open the 2017 season, Hudson was in a clear mismatch on the end of the line.

However, he used good technique to stay underneath the Gators’ tight end, locked out and slipped under for the stick and stop.

Blitzing was something Hudson did darn well at Michigan too. With his size and speed, he was able to show some serious bend to get underneath and around tackles for sacks. He lived in the backfield at the height of Michigan’s defensive powers.

Not only does he time the blitz well against Penn State in 2018, but also he shows the dip, bend and acceleration to finish at the quarterback. That’s beautiful.

Final thoughts on Hudson: I really like his versatility and his overall production during his time at a Power 5 program, but he’s pretty small and doesn’t project to a set position at the next level.

I believe a jump up in competition will negate his athleticism in the box, and he’s not fast enough to be a safety right now. I do think he can carve out a good career as a special teams ace early on, but asking him to come in and make an impact defensively as a safety or a linebacker right now is too much of an ask.

That said, if an innovative defensive coordinator can get his hands on him and let him loose like Brown did at Michigan, teams could find an answer for the offensive explosion with a versatile chess piece like Hudson.