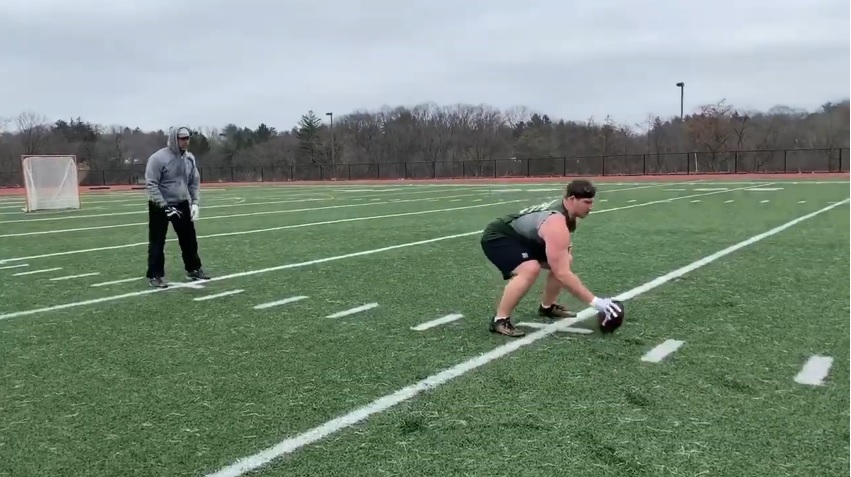 -Light, quick feet for a man his size; bounces around with ease in his pass sets
-Mauler mentality; finishes blocks consistently and stacks pancakes
-Able to clamp, mirror and match in pass pro
-Powerful iOL that stuns defenders with initial contact; heavy hands
-Possesses good awareness as a blocker and handles stunts/twists with ease

-Competition level is a major concern; didn’t face many NFL-caliber DL at Dartmouth, but dominated those that have the chance to crack the pro ranks
-Struggles with hit power and drive on the move; feet tend to stop at point of contact when asked to work on the move
-Arms are just a bit on the short side
-Can overset at times in pass pro

-First Team All-Ivy League and First Team All-New England iOL in 2019
-Didn’t allow a single sack in three years of action at Dartmouth
-Great Nephew of the legendary Bruno Sammartino
-Pittsburgh, PA native that was a First Team WPIAL honoree senior year at North Hills High School
-At Dartmouth Pro Day, put up a 5.27 40-yard dash, a 31-inch vertical jump, a 107-inch broad jump, 27 reps on the bench press, and a 7.30 3-cone drill. Numbers would have placed him as the top iOL in combine testing
-Played in 31 career games for Big Green, starting 20 career games

If you want a sleeper iOL in this year’s draft class, Dartmouth standout right guard Zach Sammartino is your guy.

A Pittsburgh native, Sammartino is a freakish athlete for an iOL, putting up some insane testing numbers while possessing some impressive tape from two full years as a starter for the Big Green.

The thing that jumps out to me right away with Sammartino is his footwork in tight. He’s a dancing bear often on tape. It’s fun to watch.

Look at the footwork to cross the Cornell defensive tackle’s face, allowing him to seal the defender off from the running back. That’s high-level stuff from an Ivy League iOL.

Sammartino has the “it” factor as an interior lineman, possessing a mauler’s mentality. He looks to take the defender’s soul from him in run reps. His leg drive once engaged is really good, and he stacks pancakes like he’s sitting down for breakfast.

That’s a solid run fit on the double team, a good, strong punch to the chest of the defender and then great leg drive to topple the defensive tackle like a tree for the fresh, tasty pancake.

This is my favorite rep from Sammartino that I saw during my film study. He has great awareness here while still engaged with a combo block, to peel off slightly, stonewalling the linebacker for an impressive pancake, keeping his quarterback upright for a big run.

In pass protection Sammartino bounces around with ease, mirroring defenders all over the place. I do have concerns with his arm length (33.25 inches) and his tendency to overset at times, forcing him to recover quickly, but the footwork and the awareness are there.

Check out the way he handles both of these twists in pass protection with ease.

Very little gives Sammartino trouble overall. While his competition level is a concern, he flat-out dominated the competition rep to rep. He has the right mentality for the position, played in a gap and man run scheme over his last two years and generally thrived.

Small school linemen are starting to grow and develop much quicker in the pros, and Sammartino should be no different. At the very least, he can be a solid depth option in a run-heavy scheme.