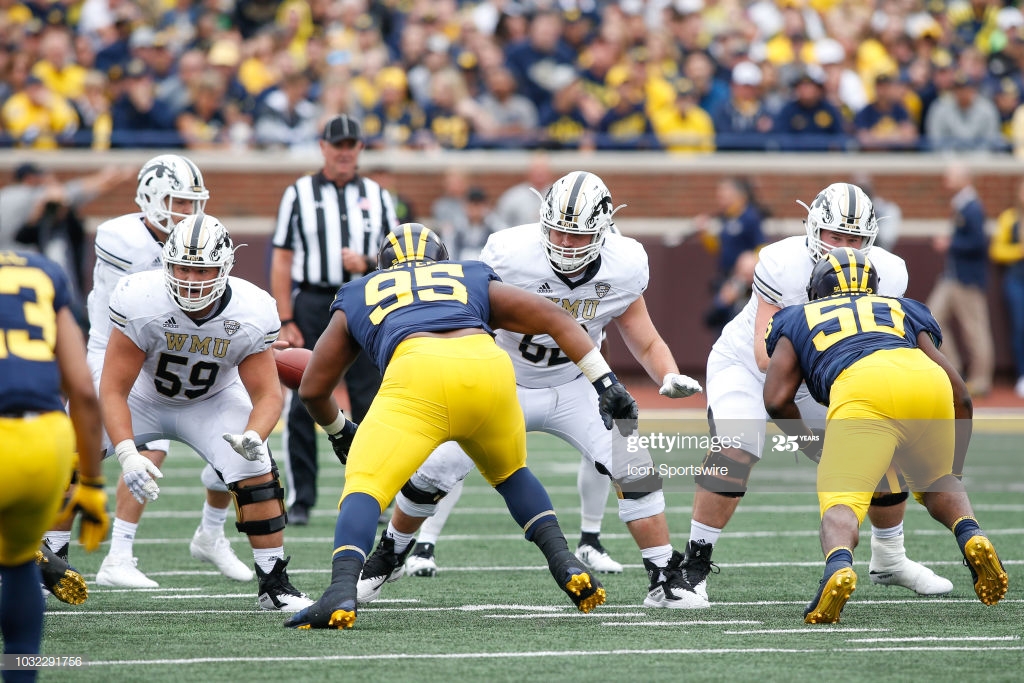 -Strong, quick hands with sound punch and placement in run fits
-Pad level is low and consistent throughout tape
-Powerful lower half to drop anchor against rushers
-Good technique and hit rate climbing to second level; awareness when working north is very good
-Positionally versatile and can change roles with ease
-Tons of starting experience at D1 level

-Feet are a bit heavy in pass protection, especially against athletic iDL
-Has a tendency to overextend in pass protection, knocking him off balance without sound center of gravity
-Not overly athletic or explosive in his movements despite strong testing numbers
-Most a ‘tweener iOL; no real defined position at the next level
-Short arms for an iOL (30 5/8 inches); could hamper him against longer, twitched up defenders

When you get this late in the pre-draft process like we currently are, you start to look for certain boxes that prospects can check for the Steelers.

Western Michigan interior offensive lineman Luke Juriga is no exception. He has the position versatility (guard and center), NFL bloodlines, heavy starting experience in college, competed in an All-Star game and is of the hearts and smarts variety.

Really, he makes a ton of sense as a late Day 3 guy the Steelers could take a swing on.

When watching his tape, I noticed Juriga is very comfortable as a run blocker but has some obvious warts in pass protection.

In the run game, he’s very sound at moving to the second level and moves with ease when asked to pull.

Watch the way he climbs to the second level here in 2019 against Bowling Green. He has really good awareness to slide off of the initial double team to chip the flashing linebacker, allowing his running back to pick up a few more yards.

He’s constantly looking for work when climbing to the second level. You’ll be hard-pressed to find a clip of Juriga standing around at the second level in the run game. He has to hit somebody every chance he gets.

There are three guys he puts a hat on in about 5 seconds. I love that mentality.

When he climbs to the second level he has good form and good power in his initial punch.

This play was the first one where I jumped out of my seat. Look at that lateral explosion after the snap. That showed me he can move well in certain instances. To top it all off, he hammers the linebacker trying to fill, opening up a lane on the RPO. This is my favorite play from Juriga.

Pass protection reps aren’t much of a strong suit for Juriga right now. He’s not bad at it, per say, but he has more ugly reps than solid ones, from what I saw.

Here against Syracuse in 2018, he overextends on his initial punch, allowing the explosive defensive tackle to blow right by him with ease. Once you overextend as a lineman, it’s over.

His footwork is a mess here. He’s too wide in his pass set, leaving a lane between himself and the center. He’s slow to recover, and when he does his base isn’t beneath him, leading to him getting stunned backwards to give up the pressure.

Overall, I think Juriga can be a solid depth option that can play multiple positions inside. He reminds me a lot of a guy like Doug Legursky. With his vast starting experience at the D-1 level, the NFL bloodlines, and the position versatility, he’s going to make a roster and serve as a value backup who could develop into a passable starter down the line.