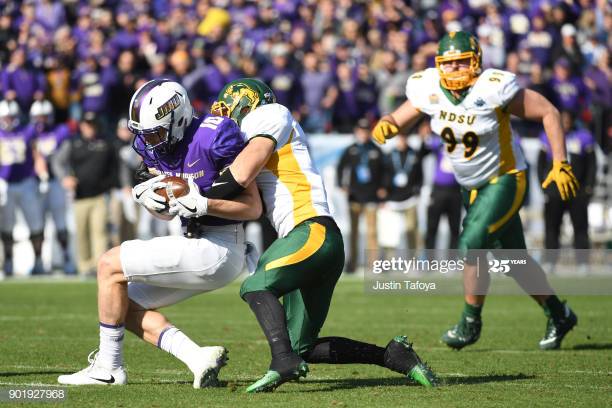 -Twitched-up athlete on tape at FCS level
-Flat-out dominated competition level over four seasons at NDSU
-Great motor coming off the edge, absolutely relentless defender
-Wins consistently with his hands as a pass rusher and packs a punch with hit power as a tackler
-Skilled, varied pass rush plan that lets him win in a myriad of ways
-Loose, explosive hips, changes directions with ease
-Extensive experience and production

-Has short arms and struggles to shock and shed against lengthy tackles
-Slow to read and react to run plays
-Competition level is a real concern, dominated non NFL-caliber tackles over three seasons
-Counters could use some fine-tuning, slow to bust out counters
-Pad level rises against the run, leading to lost reps

-Named a First-Team Associated Press All-American in 2019
-Named Missouri Valley Football Conference Defensive Player of the Year in 2019
-Recorded 48 tackles, 19 tackles for loss, 13.5 sacks and five pass breakups as a senior
-Finished four-year career with 29.5 career sacks for Bison, which is also a conference career record
-Played in 53 career games for the Bison, starting 34
-Part of five conference championships and four FCS national championships with NDSU
-Played in the 2020 East-West Shrine Bowl
-Invited to 2020 NFL Scouting Combine, where he clocked a 4.79 40-yard dash, 24 reps on the bench, a 33.5-inch vertical jump, 120-inch broad jump, and a 6.87 3-cone time

Oftentimes while working through the draft process watching film on prospects, you’ll stumble across a prospect that makes you jump out of your seat with excitement, sprucing up a process that can become rather dull in the middle.

North Dakota State edge defender and 2019 Missouri Valley Football Conference Defensive Player of the Year Derrek Tuszka did that for me.

Right away, I could tell Tuszka was a special player for the Bison. He flashed strength and quickness defending the run, his motor runs red-hot constantly, and he sure knows how to use his hands when rushing the passer.

In an ever-evolving game where pass rushers are needed now more than ever, Tuszka may have come along at the right time.

Let’s start with run defending first for Tuszka. It’s certainly not an area of strength, but as I said earlier, he has flashed the ability to be a competent run defender.

Against Butler in 2019, Tuszka had me out of my seat quickly.

Look at that initial punch against the tight end, and then the strength on the shed to free himself into the backfield. Then, he shows the absolute power and perfect technique in the tackle on the running back…wow.

You can tell right away on tape with Tuszka that he moves very well and has loose, explosive hips.

A defensive end/EDGE defender shouldn’t be able to move this easily.

Against Northern Iowa at home last season, Tuszka showed off his quick-twitch ability to change directions here, sniffing out the screen. Watch him flip his hips there at the end. That’s impressive.

As a pass rusher, Tuszka lets his get-off and hand usage lead him to wins from either side of the line.

Northern Iowa’s left tackle had a rough night against Tuszka.

Check out the initial punch to the chest from Tuszka, stunning the left tackle. Then he follows with a quick club to free himself.

You then see the relentless motor from Tuszka after he misses the sack initially; he simply doesn’t give up, popping back to his feet to finish off the play seconds later.

It doesn’t matter what side of the line Tuszka rushes from; he’s going to win with his hands.

In the first clip, he wins with hand fighting against South Dakota State, recording a huge sack late in the game to lead the Bison to the rivalry-game win on the road. That initial punch to the chest by Tuszka is so huge for him; he has short arms but if he shoots his hand out quickly and creates initial contact and creates space, he’s going to win every time.

In the second clip, Tuszka fires off the initial punch and then dips underneath to finish off the sack late in the first half, knocking Illinois State out of potential field goal range.

Overall, I really like Tuszka, the mentality, effort, and athleticism he brings to the table. He’s certainly not going to be some game-changing type of defender in the league, but he’s going to carve out a nice, long career as a rotational piece on a good defense.

He reminds me a ton of late-career Chris Long, a guy who won with his hand, his athleticism, smarts and motor, as well as a guy like Derek Barnett in Philadelphia. Short arms, good hand usage, and explosive hips.