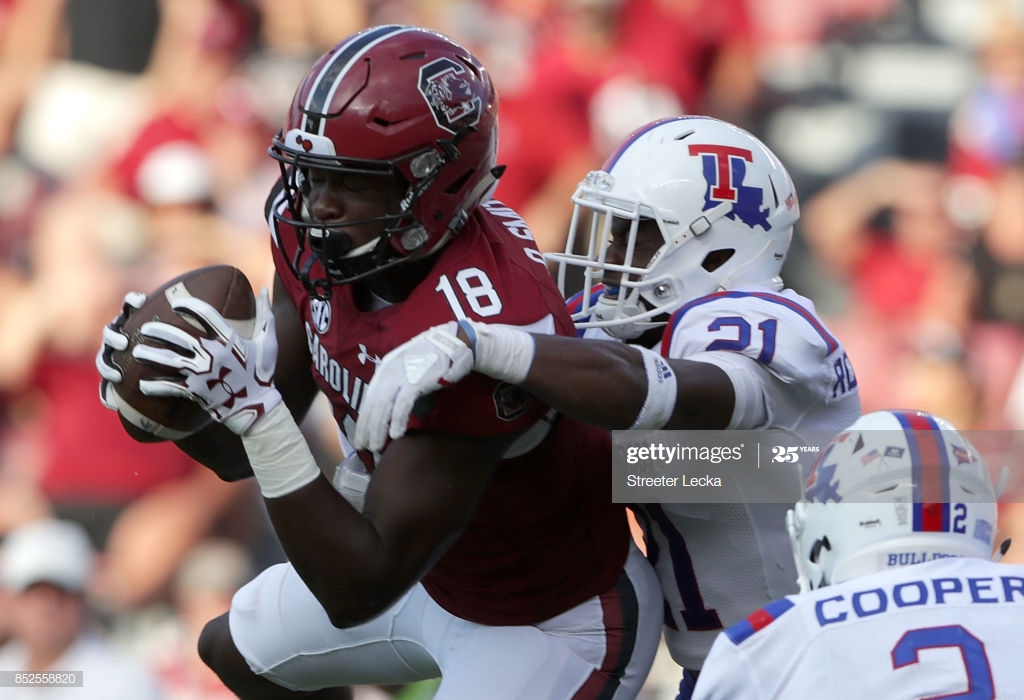 Amik Robertson remains one of the best kept secrets of this year’s draft pool at the cornerback position, due largely to limitations in size and stature.  Don’t let his size fool you though, Robertson plays with junkyard dog recklessness and swagger, drawing comparisons to his childhood hero, Chiefs DB Tyrann “Honey Badger” Mathieu.  He possesses great instincts, elite tackling ability and aggressiveness, as well as the position versatility to serve a variety of roles in an NFL defense.

Despite his 5’8” stature, Robertson possesses one of the most complete press coverage skill sets in this year’s draft class.  Although he is almost always giving up height and length, Robertson is able to get into the body of larger receivers, disrupting their release and timing off the line.  Robertson repeatedly toyed with Southern Miss receivers throughout the game, here opting for a patient “mirror press” technique, before skying a game winning interception, his third on the day.  For those who want to complain about small school competition, here Robertson manhandles a Texas receiver off the line, surprising him with an aggressive jump jam, and never letting him release off the line for the PBU.

Robertson relied on elite instincts and route recognition to routinely create splash plays for the Bulldogs.  Here, against Southern Miss, Robertson lines up in a press alignment with outside leverage, mirroring the receivers inside release before seamlessly recognizing and undercutting the post for a game changing pick in overtime.  Revealing more weapons in his coverage arsenal, here against UTSA Robertson gives the allusion of press coverage, before bailing into his deep 3rd zone at the snap, squeezing off the receiver and showing off his vertical for another impressive interception.  Once again mixing up his technique, Robertson fakes a jump jam before sealing the UTSA receiver off to the sideline and highpointing the football for a PBU.

An undervalued aspect of the modern cornerback position, run defense on the edge, which can help shut down opposing teams outside run games, further adds to Robertson’s value, whether in the slot or on the outside.  Here against FAU, Robertson perfectly executes a “crack and replace”, following his keys and quickly diagnosing the read option, taking the qb down in the backfield for a TFL.  Even more impressive, against UAB, Robertson blitzes from the boundary, shedding a reach block from the tight end and tackling the sweep for a minimal gain.

One of the best aspects of Robertson’s game is his ability to thrive in underneath zones.  Here, playing his cover 2 assignment out a press alignment, Robertson bails at the snap before instantly diagnosing the screen, flying out of his break and putting the back down for no gain with a devastating hit.

Robertson also displayed the ability to create havoc as a blitzer both out of the slot and on the boundary, with 4 sacks in his career.  Here out of the slot, Robertson fakes outside before flying through the open B gap for a quick sack.

When Robertson isn’t able to quickly diagnose and beat blocks with speed, he can get overpowered by larger framed receivers.  Here Robertson gets a late read on the screen, allowing the Texas receiver to get into his body and drive him into the end zone for an easy walk in touchdown.

Robertson is a potential steal for a team selecting in the middle rounds who is willing to overlook clear size deficiencies and look toward the versatility and impact he can provide.  Robertson has the toughness and versatility to help a team early as a dime and slot defender, in addition to the necessary press coverage tools to bump outside and provide snaps at boundary cornerback.  I’ve been seeing a ton of Mathieu comparisons, but I see a lot of former Buccaneers star Ronde Barber in his game.  Both undersized players, Robertson provides a similar impact as a playmaker, with the versatility to operate out of a wide array of coverages, as well as the ability to wreak havoc as a blitzer and tackler on the edge.  As Joe Haden ages and Mike Hilton’s future remains uncertain past 2020, Robertson could provide a great opportunity to aid in replacing both players with one selection.