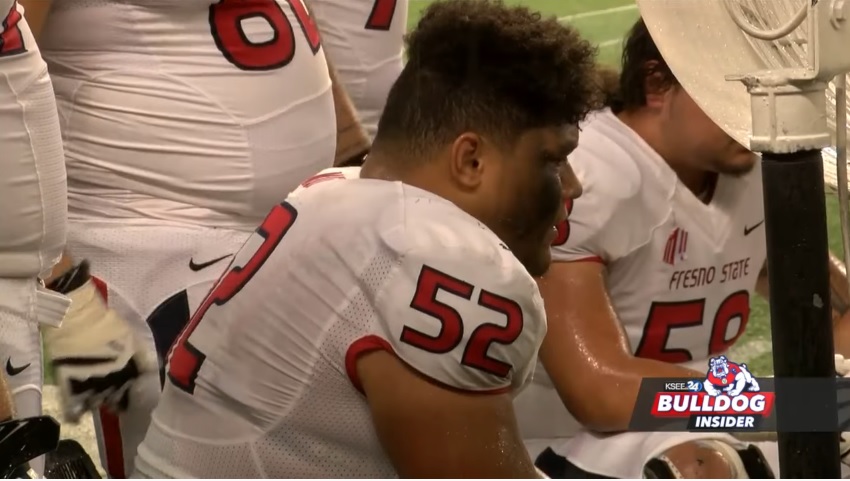 – Thick, stocky frame, sturdy build who can bang around on the interior
– Excellent upper body strength, generates a lot of vertical/horizontal movement in the run game
– Powerful initial strike that’s able to stun defenders
– Plays with nasty demeanor and desire to finish, has an edge and blocks through the whistle
– Great grip strength in pass protection, locks on with proper placement and hard to disengage or overwhelm with power rushes
– Surprising burst off the snap, more quickness than you might expect
– Seemingly well-liked and respected in locker room
– Tackle/guard experience

– Below average length (31 3/4 inches) that hurts him in run game and pass pro
– Struggles to hit target in space, climbing to 2nd level on combo blocks or pulling, and winds up whiffing far too often
– Can’t keep his face out of pass protection and gets too close on blocks, will be vulnerable to losing blocks and struggles to keep base throughout rep, gets top-heavy and bends at the waist
– Lack of length creates issue when trying to seal rushers upfield
– Punch is inconsistent in pass protection and can be too high, exposing his chest and forcing him to re-punch and win battle back
– Not a coordinated athlete and on the ground too often
– Tends to be late in recognizing/reacting to stunts
– Severe medical red flags, injured more often than he was healthy, and will be off boards due to history of leg injuries
– Long-term outlook is muddy, will he be able to play 10 years from now?
– Limited starting experience and tape to go off of, especially post-injuries

Netane Muti is such an interesting prospect. There’s so much good on tape. So much bad. And there’s so much uncertainty with his projection. Let’s start with the good before we get into the mess that is the rest of his profile.

Muti is one of the strongest linemen in the class. His stubbiness helps, especially at an event like the bench press. But putting up 44 reps is no joke regardless of length. And it translates on tape. He has a powerful upper body with elite play strength and looks to finish every block. See him pulling around him left guard to unseat #41.

In pass pro, he shows similar with excellent grip strength and ability to lock on when he plays with the proper technique and sometimes, even when he doesn’t. That strength allowed him to mask and minimize some of his technical flaws and physical limitations. Left guard here.

But there are issues. His lack of length presents a lot of problems in the run and pass game. In the run game, he struggles in space, whether that’s working to the second level on combo blocks or turning upfield as a puller.

And you see it in pass protection. Lack of length doesn’t allow him to seal the edge here and he gets beat. Again, Muti is the left guard in this clip, giving up the sack to #90.

I’m not sure if I’ve seen someone put his face in the fan in pass pro like he does. And that’s not a good thing. You want to create space between you and the rusher when pass blocking. Two clips here vs USC. He has the strength to stay locked on but that’s going to be an issue in the NFL.

Then there’s the elephant in the room. The injury history. Torn Achilles in 2018. Lisfranc injury in 2019. The dude has played five games the last two seasons. That’s bad for any draft season. Doubly bad in a year with information so much more scarce, though Muti was at the Combine and surely was poked and prodded by doctors. Still, he’s a risky pick in a year already carrying a ton of risk. For Pittsburgh, it’s hard to anoint him as your pick at #49 and have him effectively be the face of the class. He may fall further in this draft than other years just because of all that medical uncertainty.

But *if* he stays healthy, there’s legitimate talent there. At his best, he reminds me a lot of Will Hernandez, drafted 34th overall in 2018.