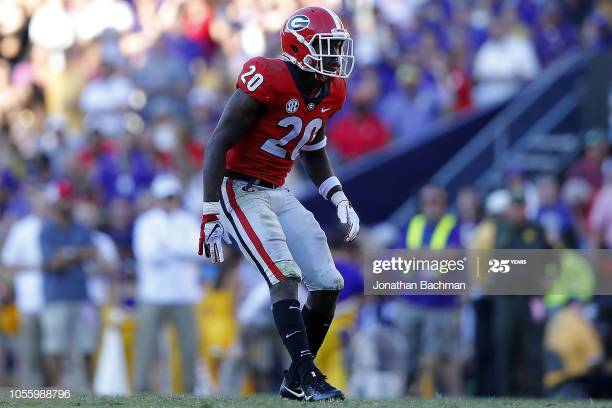 After starting his career at Tulsa, J.R. Reed became a three year starter for the Georgia Bulldogs on the back end of their defense. He played primarily in two deep coverage aligned to the field side and would often line up over the slot receiver as well. He has a lean frame and is a good communicator helping to make sure they were in the right formation.

Against the pass, Reed spent most of his time deep in split safety coverage.  He has solid range with good route awareness and mental processing to pick up routes and stay deeper than the deepest receiver in his area. He has solid speed and ability to click and close on throws in front of him and makes calculated decisions when going for the ball in the air. From the slot, he showed good recognition and quickness to get downhill against screens and played primarily in off coverage. I only saw him jam a receiver once at the LOS in the red zone so that was inconclusive. He is able to handle tight ends in the slot, was used in the robber roll occasionally and also a rare blitz from the slot.

Vs Alabama, he’s the deep safety on the near hash. He’ll slide back to a Cover 3 look and reads the Post from the slot and makes the INT.

Vs Notre Dame, he starts in the middle of the field, reads the deep Cross by the slot and shows good closing speed to make the INT

Vs Florida, he’s on the far side and will help on the RB Seam route.  Playing from a deep position he reads the QB and makes a good break on the ball

At Auburn, he’s lined up in the slot recognizes what the offense wants to do, engages the blocker and fights his way to the ball.

Against the run, he showed consistent effort in critical situations like the red zone and when he was the last line of defense.  He is feisty taking on blocks, will work to hold his ground and take out the puller when he’s on the outside. His tackling form is better in tighter window getting low to take out the ball carrier. On big plays he takes good angles across the field to cut off the runner.

Vs Alabama, he’s the deep safety on the far side of the field. He reads the run, comes up quickly and makes the stop but his tackling from is suspect.

Since he plays so deep it limits his chances to break up passes and make plays on the ball. His angles to the ball vary and his tackling in space is mish mash of inconsistent technique. I wouldn’t put him on quicker slot WR’s if it can be avoided. Sticking his nose in on plays was a conscious choice. He tackled when he needed to lacking aggressiveness to put himself in the play. He will pull up at contact instead of getting in the pile and passes up on big hits in the passing game when he has the chance.  He needs to improve getting off of blocks against all type of players.

Vs Alabama, it’s a pass over the middle where Reed comes up to make the hit but decelerates a contact leaving it more like a bump.

Vs Florida, he’s the safety at the top. It’s an In route in front of him and he starts to come up to make a hit and pulls up to avoid the contact.

The words that come to mind with Reed are smart and safe. He understands routes, keeps the play in front of him when playing deep, makes calculated attempts to break up passes and doesn’t subject his body to unnecessary physical contact. The cons are at the depth he play he rarely gets opportunities to break up passes and executive decisions were made when it came to making hits. His tackling technique needs to be fixed, he may be limited to only playing in split safety alignment and his lack of physicality makes me wonder if he would be an asset on special teams.

With NFL bloodlines and good size someone will take a chance on him and see if they can build on his good qualities.