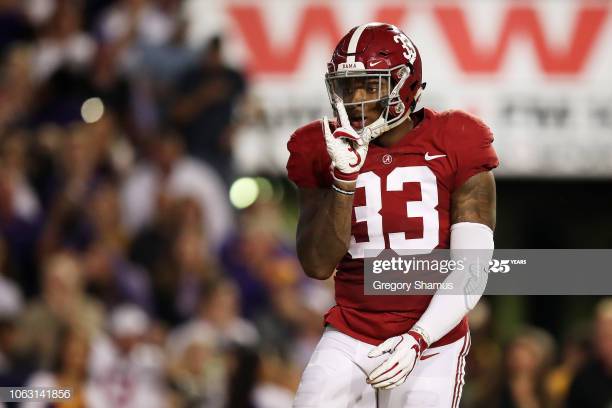 – Big frame, large lower half and looks the part to be an NFL linebacker
– Technically sound player in all areas, pass rusher and run defender
– Excellent hand use, ability to disengage from blocks run and pass
– Sets a physical edge versus the run, strong force player who funnels everything inside
– Strong upper body who holds the point of attack against the run and routinely gave TEs problems
– Plays with excellent hand placement and strike, overall leverage and pad level is very good
– Smart player with good football IQ and pass rush plan, able to string together multiple moves on a play
– Versatile player who lined up all over, has experience playing with hand down or on his feet and use off-ball in college and at college All-Star games
– Good starting experience against elite competition

– Average to slightly below average length (32 7/8 inches)
– Not a special athlete, just marginal burst off the line and isn’t explosive enough to threaten tackles around the edge with speed alone, causes him to get stuck on blocks
– Lacks hip/ankle flexibility that can make it hard for him to bend through contact, even if he shows good upper body use
– May change positions at next level, making his projection a little murkier
– Goes quiet too often for stretches of time
– Moderate production and never had a breakout/dominant year
– History of knee/ankle injuries, medical concerns that must be addressed for teams to be comfortable with him

Simply put, Anfernee Jennings is one of the most technical players of anyone in this class. Really smart, dependable player whose upside isn’t immense, it’s refreshing to watch someone with his skillset.

Jennings plays with excellent hand use. His placement on his strike is consistently excellent, keeping his pads low and hands inside. He’s able to string together pass rush moves, like this long-arm to rip to win the edge here.

Or this plan of attack against this South Carolina RT. Aligned outside, the tackle sets wide, so his counters by swimming and winning cleanly to the inside.

You see similar against the run. Also from the LSU game. Force player as the RDE here. Peeks inside to see the back, keeps his outside arm free to funnel the back inside, and then sheds the block and finishes the play.

Alabama OLB Anfernee Jennings is one of the most technically sound players I've watched in the draft. Not flashy but steady player with great hand use and football IQ.

RDE here. Peeks inside to find the RB, gets outside arm free to secure edge, sheds block, makes tackle. pic.twitter.com/Ix3XLrZXZp

But he’s an average athlete and not someone I see as anything resembling a premier pass rusher. Just not athletic or twitchy enough around the edge and that’s one reason why Jennings worked plenty as an off-ball linebacker at the Senior Bowl. Watch him get pushed upfield here.

Then there’s the medical. Jennings suffered a scary knee injury in the 2017 playoff game against Clemson. He was able to recover from it and has shown durability since but it’ll be a concern long-term teams will want answers too. That’ll be tougher in a year like this without formal Combine medical rechecks and teams being more risk-adverse.

Here’s a look at the injury though fair-warning, it’s pretty unsettling.

#RollTide #Alabama #CFBPlayoff Anfernee Jennings left knee injury did not look good. He was playing such a great game. pic.twitter.com/TG2BEwo6mc

Overall, Jennings is a good player who feels “NFL ready.” He simply lacks high NFL upside, may end up playing ILB, where he would do well, and as an EDGE rusher, probably is a #3 rotational player as opposed to every-down starter.

My comp for him? Kyle Emanuel, an OLB/ILB drafted in the 5th round of the 2015 draft with 33 career starts before retiring due to injury concerns (but is apparently attempting a comeback).