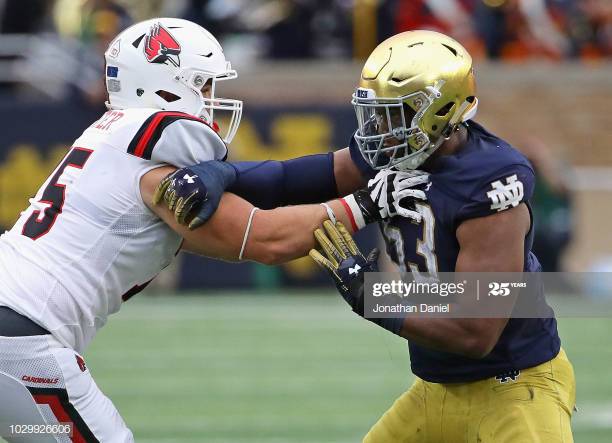 -Doesn’t always have a pass rush plan
-Lack of counters is glaring on film
-Underwhelming pass rush production during career at Power 5 program
-Rush moves take too long to develop and aren’t nuanced
-Athleticism overall is a concern; looks clunky on film
-Very limited experience standing up or dropping into space

-Named a team captain at Notre Dame in 2019
– Started all 13 games in 2019, recording 46 tackles, 10.0 for loss, 5.5 sacks, 11 QB hurries, three forced fumbles a fumble recovery and a pass break-up
-Finished 2019 season as the top-rated player on defense according to Pro Football Focus, earning a season grade of 85.1 with a pass-rush grade of 86.6
-Played in 43 career games (26 starts) over four seasons with the Fighting Irish
-Finished four-year career with 109 tackles, 26 tackles for loss, 13 sacks, four forced fumbles, and two fumble recoveries

Coming into the 2019 College Football season, Notre Dame boasted a pair of pass rushers that had high expectations. One lived up to the expectations, while the other really struggled to show much of anything as a pass rusher.

That would be senior captain Khalid Kareem, who certainly looks the part, but hasn’t quite lived up to expectations on the field.

As a run defender, Kareem puts some good reps on tape. He consistently sets the edge, is rarely fooled by misdirection, and really holds up well at the point of attack.

Rushing the passer though, he just doesn’t have a plan, is slow with counters, and really doesn’t have a move that wins with any semblance of consistency.

Early in his career, run defending will have to be his calling card.

Against Vanderbilt in 2018, Kareem stays pinned to the line of scrimmage, doesn’t over-squeeze, and has the pursuit skills and strength to make the tackle for loss.

While there’s a ton of window dressing happening in front of him with the tackle blocking down, the tight end pulling across, and the misdirection in the backfield, none of it fools Kareem.

He has the quickness to shoot gaps too, even from an edge perspective.

Watch him cross the right tackle’s face, knife inside and make the tackle on the running back for a loss.

That get-off can be a real tool for him to rely on early in his career when defending the run.

While he sets a consistent edge and has the power to withstand blocking, he doesn’t have the power to get off blocks in a quick manner.

Here against Michigan tight end Sean McKeon, he does a great job of standing the blocking tight end up in the hole, but when it’s time to get off the block he doesn’t have the power to stack and shed.

As a pass rusher, Kareem has some juice in a NASCAR-type defensive line package, rushing from the interior. He’s a bit slow on stunts and twists, but he has good finishing speed to get to the quarterback.

You can see the slow-developing twist with Kareem working inside to outside, but then watch the long strides chew up grass to get to Shea Patterson for the sack.

That’s against likely first-round tackle Andrew Thomas out of Georgia.

He gets stunned early, can’t formulate a counter, and then gets tossed up the field, making him irrelevant to the pass rush. That’s a major concern with Kareem overall because it happens quite a bit when rushing one-on-one from the outside against powerful tackles.

Overall, I just can’t see him being a viable pass rushing option unless he puts in some serious work with his hands and his pass rushing moves. That said, he can be a solid early-downs run defender right away. He has the smarts, the strength, and the discipline to hold up well in the run game.

You’re not spending a high draft pick on a run defender in 2020 though.