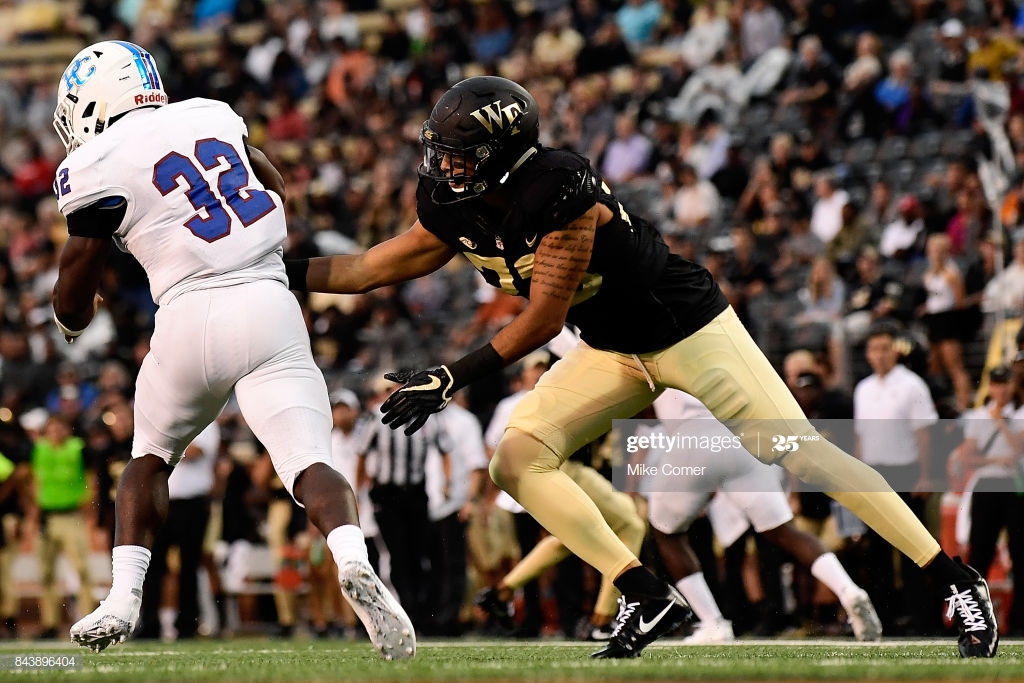 An athletic linebacker with a lean build who had his senior year cut short by injury. He is a three down player and had a productive career at Wake Forest.  He has a lot of special teams playing time as well even as a senior playing on kick coverage.

Against the pass, he played a lot of Zone coverage and looks comfortable in his backpedal when dropping into the curl area and gets good depth while eyeing the QB.  He has good COD to click and close on the ball within his zone and shows good effort to flow to the play. He has solid ball skills and will attack the ball in the air when the opportunity is there.  His athleticism would allow him to play in a Tampa 2 defense where the ILB needs to get very deep. In Man coverage he was solid in the short area covering TE’s and RB’s in the curl/flat areas as well as carrying TE’s up the seam. He has solid timing on his blitzes and can be used as a spy on the QB on 3rd downs.

Vs Utah State, he’s on the hash in the middle of the field. He’ll start to his left initially but the screen goes away from him and displays good effort to chase it down.

Vs Utah State, he starts out near the LOS and drops to get under the intermediate route to make the interception to close out the game.

Vs North Carolina, he shows blitz before dropping to cover the slot in Man coverage.  Good speed to chase him down and keep the gain short.

Vs North Carolina, he’s on the right edge showing a blitz but drops to spy. He displays good acceleration to chase down the QB to the outside.

Against the run, he played from different alignments base on the offense. He shows good quickness at the snap to flow with the offense. He has good acceleration and can split through blockers and into the backfield quickly. He displays good speed and effort to chase from sideline to sideline and downfield.

Vs Utah State, on a 4th and one play he gets downhill quickly before the tackle can reach him and make the stop short of the line to gain.

At Boston College, on the right edge comes from the backside quickly to get in on the tackle.

Despite his size he has short arms (31.75 inches) and that affects his tackling causing him to slide off ball carriers. While in Zone coverage he will get pulled out of his area chasing underneath routes opening up space behind him. He needs to be more disruptive when over the slot or with receivers running through his area to use his hands to hinder them from getting into or knocking them off of their routes. In Man coverage he leaves too much space between him and his man and needs to tighten that up.  He wasn’t asked to pass rush often and provides very little there.

At Boston College, he’s near the logo and this looks like Zone coverage. He should be in the curl area but drifts to the out route.

His mental processing is spotty vs the run and he’ll read the line and shoot toward where he thinks the play is going instead of following the ball. He doesn’t run through the ball when tackling and gets hung up on blocks. When flowing to the ball he needs to stay inside the runner to cut off the cutback lane and stretch the play. His angles when chasing outside are too shallow making it harder to cut off the runner. His speed of play increases in critical situations, he made several big plays in big situations. Which makes me wonder why he doesn’t play at that speed all the time?

Vs Utah State, he is aligned at the hash mark and read the TE folding to the inside and runs to that gap while the RB goes the other way.

Overall, he is a good pre snap communicator to get everyone on the same page; he has good athleticism to be a three down linebacker, can be used different ways in coverage and has a knack for making big plays. Length is an issue when taking on blocks and slipping when making tackles. He needs to improve on reading his keys, getting off blocks, driving through tacklers and closing up the space between him and receivers in Man coverage.

Best fit for him would be in a 2 gap defense that can help him not deal with blockers as much that also plays a lot of Zone/Tampa 2 coverage. He’ll be a special team contributor right away and backup linebacker who with improvement he has a chance to start as a WILL (4-3) or MACK (3-4) linebacker.