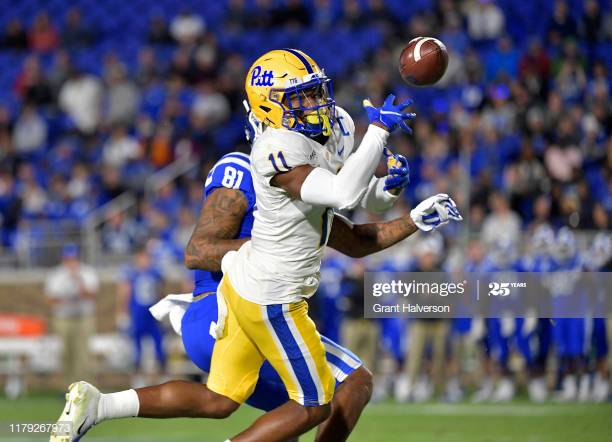 – Patient player capable of playing in press alignment, doesn’t guess and reads route/stem of receiver with good anticipation, allowing him to take good angles and close on the football
– Fluid player with good change of direction ability, shows speed turn to get back in-phase when beat at the LOS
– Desire to be physical, sticks his nose in the run game and good tackler when he plays with proper technique, seeks out contact
– Experience playing left/right cornerback, time on field and boundary side
– Excellent starting experience
– Good overall production
– Regarded well in locker room, team captain

– Slighter frame and lacks length (30 3/8 inch arms) that will especially hurt him in press
– Lacks long speed and will struggle to catch up in the open field and against faster receivers, average to slightly below athlete and tested like it (4.57 40)
– Needs to get stronger, will cause him to miss tackles, and struggles to consistency separate player from ball at catch point
– Can get grabby at catch point
– Will go for kill shot as a tackler too often, leading him to miss
– Looks more uncomfortable playing off/deep third than press/man
– May have to learn new position at NFL, sliding to the slot
– Lacks NFL upside, ball skills are limited and didn’t intercept a lot of passes

Dane Jackson is going to fall into the “known” category for the Pittsburgh Steelers. Western PA native, Pitt guy, the teams share practice facilities, so that familiarity is going to give him a leg up. On tape, he’s a physical, patient prospect who lacks top end athleticism.

He often played in a press alignment though wasn’t always actually asked to press. Still, he’s patient in his pedal and even when the WR wins off the line, Jackson shows a speed turn and the ability to get in-phase. He closes on the ball with good angles, like these breakups. He’s at the top in the second clip vs UCF.

And Jackson is more than willing to bump in the run game, even if he’s undersized. That’s why he has nine career TFLs, a good figure for an outside corner.

But his top end speed is reflected in that middling, high 4.5’s 40 time. Watch him get outrun here in the open field.

And his slighter frame can make him prone to missing tackles. Or he’ll make up for it by going for a killshot, as he does in the second clip against Clemson QB Trevor Lawrence, whiffing badly.

He wants to be a press corner that lacks the size and length to mix it up enough nor the athleiticsm to recover when receivers inevitably win off the line. Though he hasn’t played much of it, his feistyness and good-enough quickness project to being a solid nickel corner, maybe even a starter, though his ultimate upside is limited. His ceiling is Alterraun Verner with a low floor of Corn Elder.

Could be on Pittsburgh’s radar late on Day Three given how well they know him.