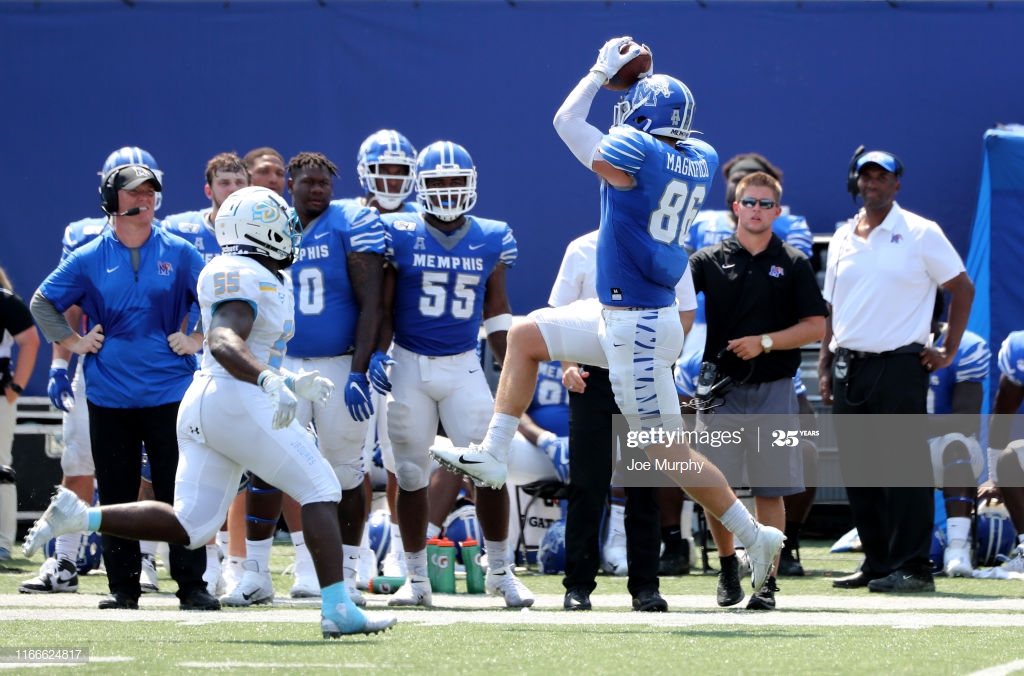 -Works well vertically and has a late second gear to create separation
-Flashes strong hands at the catch point; soft to let the ball drop into place nicely
-Seam stretcher from in tight; chews up yardage in a hurry to get vertical
-Good red zone weapon that knows how to find soft spots in zone
-Has some YAC and power to his game with the ball in his hands
-Positionally versatile; handled multiple roles well at Memphis
-Thick, durable frame

-Seriously lacking strength as a run blocker
-Technique is a mess; doesn’t use his hands well to create initial pop and separation
-Appears a bit hesitant to create contact as a blocker
-Struggles to hit his target as a blocker when on the move; drops his head often and takes poor routes to defender
-Limited route tree that needs serious refinement at the next level; not everything can be vertical
-Undersized for the position

-Played in 53 career games for Memphis, starting 38 games over four seasons
-Finished four-year career with 71 receptions for 1,063 yards and 12 touchdowns
-Academic All-American as a redshirt junior and senior for Memphis
-Sat out Cotton Bowl loss to Penn State while nursing infection from knee injury
-Was not invited to the NFL Scouting Combine, nor a post-collegiate all-star game

Leading into the 2019 College Football season, I was really intrigued by Memphis tight end Joey Magnifico. He certainly makes the all-name team, but he showed some flashes in 2018 that had me excited for 2019.

When watching live, he looked fine throughout, but diving into the tape had me coming away extremely underwhelmed with Magnifico’s overall body of work.

As a receiver, he’s super raw but show some traits that could allow him to have a decent career as a TE2 in an offense.

He stretches the seam well, works vertically with ease and has a late gear to create ample separation. His hands are pretty solid too.

You can see he moves well and has some juice to his game after the catch. I like the slight head nod to the outside to slip back inside the box defender, allowing him to work vertically into space.

If one thing was consistent on tape with Magnifico, it was his ability to make plays through contact.

That’s a tremendous one-handed grab down the left sideline against Southern University in 2019. You can see the defender has his one arm hooked, forcing Magnifico to make a play with one hand.

He does a great job cradling it into his body and tucks it away to complete the catch.

As a blocker though, Magnifico leaves so much to be desired. He might not even see the field in the NFL his rookie year because the blocking is that much of a liability.

I honestly have no idea what Magnifico is trying to do here. Is this an attempted cut block gone wrong? What in the world?

I’ve never seen a blocker do this before. It’s a terrible rep. He looks like he’s trying to avoid contact at all costs, which allows his running back to get tackled at the line of scrimmage by his defender.

It’s nice to see this type of finish there at the end, but it’s too little, too late.

There’s very little lower half strength from Magnifico as a blocker and it shows quickly here. He does a good job creating initial contact, but then he stops his feet and loses quickly to the defender, getting pushed back into the running back’s path.

He’s lucky he had a special back at Memphis in 2018 in Darrell Henderson.

Overall, I think Magnifico needs at least a year on a practice squad somewhere to develop his route tree, add some strength, and figure out what it takes to compete as a blocker. If he can become at least a serviceable No. 2 or 3 TE in an offense, that’s a win for him.