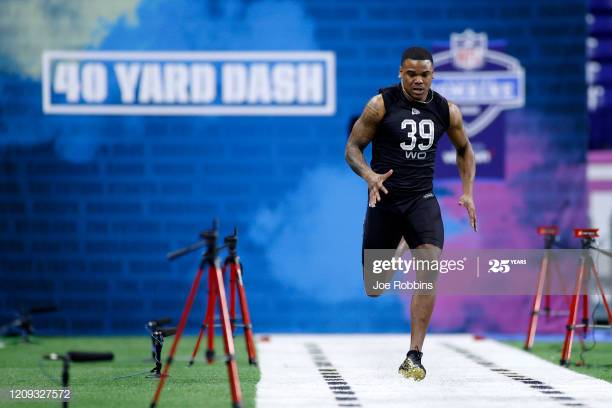 A FBS prospect that has good size, experience and high production over his collegiate career that includes impressive numbers in receptions, yards and touchdowns.  In the Rams offense he lined up as the Z receiver and in the slot and was used on the entire route tree.

In the passing game, against Off Man coverage he shows good acceleration off the line of scrimmage and uses subtle route angle to manipulate the DB into committing his hips. Against Press Man he uses quick footwork and stutters to open up room to release. Against Zone, he is strong at finding open spaces in between the defensive levels and squares up quickly to give the QB a good target. Overall, he’s a solid route runner using quickness at the top of the stem to create solid space. He was used throughout the whole route tree on all three levels. His hands and ability to adjust to the ball are very good, attacks 50/50 balls and has very good body control on the sideline.  After the catch, he displayed good quickness and agility to change direction and make the first guy miss.

At Ohio from the left slot he runs a seam route and high points the ball nicely to make catch.

At Ohio, he’s lined up wide right and will run a skinny post and makes a nice leaping catch for the touchdown.

At Ohio, he’s in the slot to the top and runs a Dig route between the levels of the Zone. He makes a nice adjustment behind, in traffic, to make the catch.

At Virginia Tech, he’s in the slot to the top and will run a curl vs Zone.  He uses good quickness to stop and whip around to the QB.

At Virginia Tech, he’s in the slot at the top running a Dig route. He uses a nod to the outside before breaking in and makes a nice adjustment on a low throw.

At the East West Shrine Bowl, he’s at the top of the screen and will run a go. He misses with the hands swipe against the DB but works with the QB to come back to the ball and makes a leaping sideline catch.

In the run game he was used on jet sweeps and on direct snaps. As a blocker he showed good aggressiveness, hand placement and aggressiveness to block defensive backs and blocking down on linebackers on the second and third levels.

At Ohio, from the slot it’s an RPO and the ball gets handed off. He turns into blocker and locks onto the free safety with good hand placement and drives him back.

I saw limited releases against DB’s trying to jam and he’ll have to show that ability moving forward.  In the games watched I didn’t see him break tackles to add yardage but highlight clips show him taking slants the distance. He only registered 26.5 inches on his vertical at the Combine but the tape shows better leaping ability. Obviously, level of competition is a concern and route running and ability to separate versus better competition remains to be seen but he looked solid in the East/West Shrine Bowl. He doesn’t show the long speed to play the Z position at the next level.

At the FCS level, Parker has been a splash play maker.  Over the last two seasons he has reception of at least 25 yards in 20 of 23 games and at least 10 plays in his career over 50 yards. His ability to make the tough catch either adjusting to the ball or while leaping with very good hands is intriguing hopefully he can build himself into a consistent receiver. He has a full route tree and experience playing inside and outside and is a willing blocker for teammates. He’ll have to show a consistent ability to separate, sharpen his route running and beat Press vs a higher level of competition.

I like his overall skill set and with some improvement he has a chance to earn a 4th or 5th receiver roll as a slot receiver and backup the X position while also participating on special teams (played gunner in the Shrine Bowl).