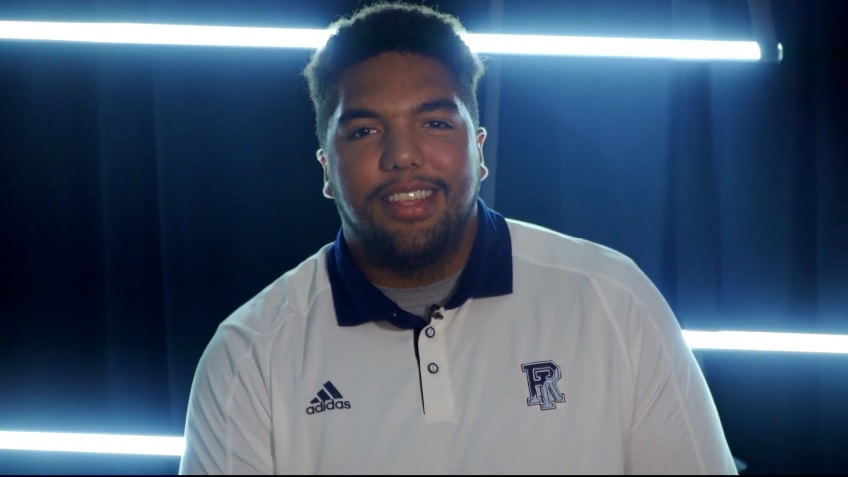 The first thing you notice about Kyle Murphy is how thick he is from top to bottom. A wide bodied, versatile offense lineman from the FCS level who spent the majority of his time at left tackle but has starting experience at 4 positions along the offensive line.

In the passing game, he shows solid quickness and kick slide at the snap move into his set position.  He has good timing with his hands with good length with very good hand strength to lock on to defenders. He has good athleticism and solid feet to mirror speed rushers up the arc and react to counters to the inside.  From the guard position, he’s able to mirror in confined spaces and uses his hands well to counter defenders. He has a strong anchor to reset his feet and stifle power rushers. He displays solid mental processing on twists to pick up and pass off rushers.

At Ohio, here is good rep vs an outside rusher with good footwork to cut of the angle, body positioned between him and the QB and timing and strength of his hands.

At Virginia Tech, he keeps his leverage, keeps his feet moving and after gaining the upper hand continues to sustain.

At the East/West Shrine Bowl, he is the left guard. He pops up a little too high but is able to lock on and reset his feet to stem the rush.

In the running game, he played in an offense that incorporated mostly Zone runs. He has good quickness out of his stance and good feet, body positioning and hand placement to wall off outside defenders. He displays good quickness to the second level and swallows up defenders with positioning and leg drive. He showed solid push and leg drive in down and double team blocks. He has solid agility to pull in limited opportunities.

At Ohio, playing left tackle on and inside run he uses good leverage and positions his body to the inside to kick out the end defender.

At Virginia Tech, he is the left tackle and plays with good leverage and leg drive, locks on to the DT and drives him to the far hash.

At the East/West Shrine Bowl, he is the left guard and will chip the DL before getting to the second level and squares up and drives the LB to the ground

When working against rushers he needs to maintain consistent depth on his kick slide to stay in good position. He will chase wide rushers trying to engage instead of being patient and cutting off the angle. He doesn’t punch to stun preferring to lock on right away. Speed rushers up the arc forces him to try to quicken his feet leaving him chasing. Playing inside he was popping up in his stance in pass pro diminishing his leverage. He didn’t move defenders one on one with regularity.

At Ohio, he’s at left tackle facing a speed rush. His second kick step doesn’t get enough depth and he gets beat around the edge.

He plays with some nastiness that you like to see from your offensive lineman. Overall, he has good athleticism, good hand and play strength, fantastic positional flexibility and has a good anchor. His positioning in Pass Pro needs to more consistent, show better patience and angles in his pass sets and play with better leverage.

He’ll have some growing pains with the jump in the level of competition but his aggressive demeanor and positional flexibility are intriguing. Moving inside would maximize his ability and length and limit facing the speed rushers. He’d fit best in an inside Zone or gap blocking scheme and would be best utilized as a developmental interior offensive lineman who could be an emergency fill in at tackle.