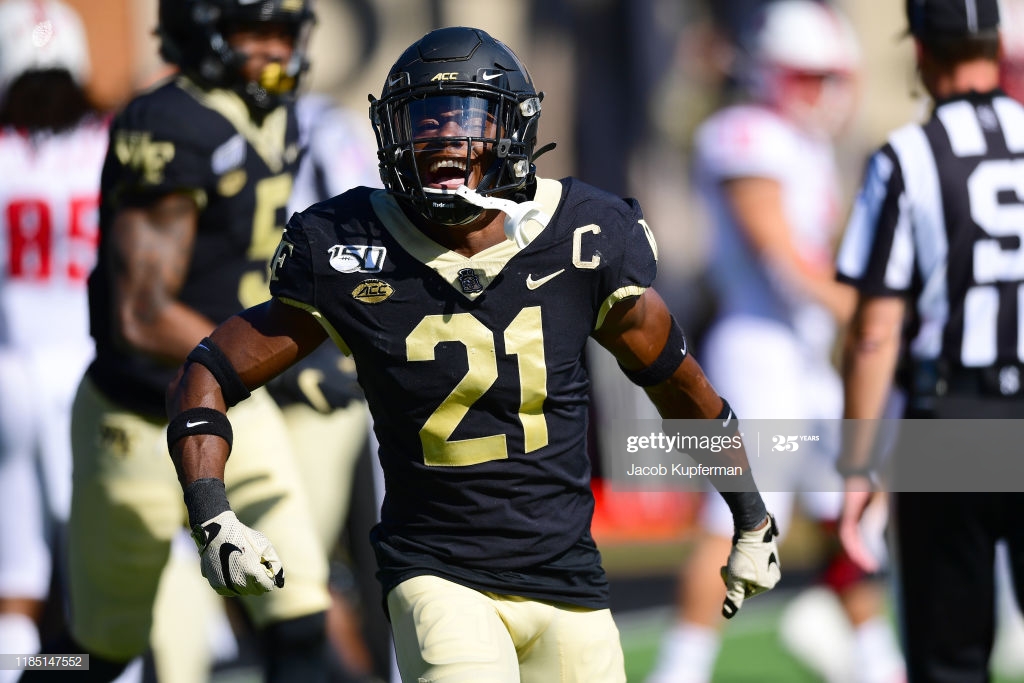 Although cornerback remains arguably the strongest and deepest position on the roster, a late round selection isn’t out of the realm of possibility if the right guy is available.  Enter Essang Bassey out of Wake Forest, a three year starter and one of the top CBs in an ACC conference that is absolutely loaded at the position. While Bassey’s lack of stature will push him down some teams draft boards, he possesses all of the tools necessary to succeed in the slot at the next level.

Bassey possesses elite change of direction ability in and out of his breaks, leading to some impressive reps in off man coverage.  Here against Boston College, Bassey stays patient in his pedal, keying the quarterback’s eyes and undercutting the out route for a pick on fourth down.  Against Towson, Bassey uses his route anticipation skills, getting on top of the receiver to squeeze the post and beating him to the spot for a nice interception.

Bassey was all over the field in 2017 against North Carolina State, arguably the best game of his career, showcasing all aspects of his game.  Early in the game, Bassey once again showcases elite patience out of off coverage before aggressively driving on a slant, nearly picking off Ryan Finley.  Later, Bassey shows his physicality, throwing his body into Jakobi Meyers and playing through the receivers hands for a tough PBU on the comeback.  Finally, Bassey shows off every bit of his 39.5 inch vertical, skying for the game sealing interception on a Hail Mary by Finley.

Another aspect of Bassey’s game that jumps off on tape is consistent tackling on the edge.  Here, once again vs North Carolina State, Bassey perfectly executes the “crack and replace”, reading the receiver heading to block the safety and filling the alley, making a physical tackle on Nyheim Hines for no gain.  Later, on a key 3rd down with the game tied, Bassey, here playing an underneath zone assignment as the primary flat defender, watches Finley’s eyes, getting a great jump on the swing pass and cutting the back down for a big TFL.

If the Steelers elect to take a cornerback in this year’s draft, it’s much more likely to be of the slot variety with Steven Nelson and Joe Haden entrenched as starters on the outside, and Justin Layne serving as a developmental future piece with no slot versatility.  Thus, with Mike Hilton potentially leaving after this offseason, the team needs to address the slot cornerback position with a player capable of handling the significant run defense responsibilities in a hard nosed AFC North.

Here, Bassey aligns as the boundary corner to the nub tight end side of the formation, where he is responsible for the tight end in man coverage, and serves as the primary run defender in the C-gap.  Bassey keys the tight end off the snap, diagnosing the run and exploding through the C-gap for an impressive TFL.  Against Towson, Bassey showcases his high quality football IQ, playing with outside leverage against the receivers cut split, blanketing the receiver on a mesh concept and bringing him down short of the sticks with a physical tackle on 3rd down.

The one big knock on Bassey would be that he struggles against bigger framed receivers, particularly in the red zone, which will hurt his ability to make any contributions as an outside cornerback at the next level.  Here, Tee Higgins is able to use his big bodied frame to shield his catch radius from the smaller framed Bassey, leaving Bassey unable to contest the catch for an easy touchdown.  You would ideally like to see Bassey fight harder to keep inside leverage here, as corners are generally taught to take away the inside and force the quarterback to make the tougher throws to the sideline down in the red zone.

Overall, Bassey projects as a solid asset for an NFL defense out of the slot as his fluidity and change of direction ability out of off-man coverage, as well as his proficiency in underneath zone coverage should allow him to become a playmaker.  For Pittsburgh, who opted for Cam Sutton this past season as their third down slot defender, there is a very realistic scenario where Mike Hilton, who trails only Jamal Adams in TFL’s at the defensive back position since 2017, will be allowed to walk if he exceeds Pittsburgh’s price range.  Hence, the need for a slot defender who can produce as a run defender and blitzer off of the edge remains a high priority in the Pittsburgh scheme which uses the Nickel package as an effective base defense.  While my favorite prospect to replace Hilton would be Amik Robertson out of Louisiana Tech, Bassey is built from the same mold, and will likely hang around later in the draft than Robertson, making him a more likely fit with the team.

Bassey could come in and contribute as a four phase special teamer on day one, before eventually sliding into the equation as the Steelers primary Nickel defender in 2021, giving Sutton the versatility to continue his contributions at the inside and outside cornerback positions.  My NFL comparison would be Kenny Moore II, who has developed into one of the NFL’s best slots at 5’9”, and shares Bassey’s ability to man up the slot, as well as showing the versatility to bump outside and occupy shallow underneath zones.