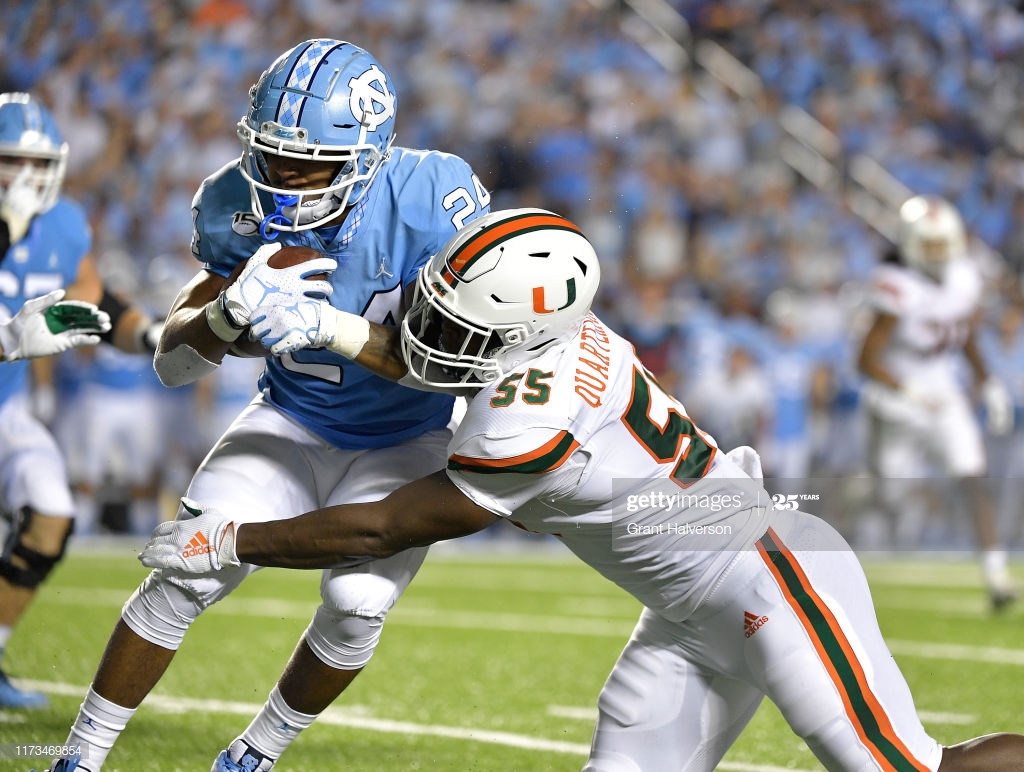 Miami linebacker Shaquille Quarterman has been doing this for a long time. He has started every single game since arriving on Miami’s campus, making 52 career starts. From Freshman All-America to First Team All-ACC, the Miami linebacker has put together an impressive list of accolades during his collegiate career. His 356 tackles are ninth most in Miami history and each one of those tackles were delivered with authority.

Quarterman is about as old school of a linebacker as you can get. He’s got a great first step towards the play direction and comes downhill quickly and efficiently. For running backs, the worst is yet to come though as the Miami linebacker makes sure that opposing running backs feel his carnage. Quarterman delivers tone setting hits like the one above frequently. In fact, his game could draw a lot of comparisons to current Pittsburgh Steelers linebacker Vince Williams. Both have their strengths in run defense and both are very hard hitters who pack a punch.

What makes Quarterman such an effective run stopping linebacker is not just his physicality; it is also his ability to navigate through junk. What exactly does it mean to navigate through junk? The trenches can be complete chaos as bodies are flying everywhere and the best linebackers are able to work their way through bodies and potential blockers to get to the ball carrier. The Miami linebacker is able to do this quite well and the above play may be his best example of this. Watch as he once again demonstrates a quick first step and is able to slip by the first lead blocker. He then makes his way through a group of blockers and wraps up the ball carrier with another aggressive tackle.

The senior linebacker does a good job beating blockers when they approach the second level which is a big reason why he has been a tackling machine for the Hurricanes. This play above really is a thing of beauty. Quarterman reads the run direction and is able to find the ball carrier despite him cutting back due to his lateral quickness. As the offensive lineman comes to the second level, the linebacker is able to avoid him by quickly stepping back inside. By doing so, he is able to contain the play to a one-yard gain.

When you play with the intensity that Quarterman possesses, you are bound to get more than a few highlight worthy plays. Here is one of those very plays above. The Miami linebacker not only plays hard but he also has immense upper body strength. While usually it is the offensive linemen doing the pancaking, Quarterman can also return the favor and he does above, putting the Louisville lineman on his backside.

Everyone loves to watch a physical linebacker lay a big hit. There is not a purer feeling in the sport of football. But in order to be in position to make those plays, the linebacker must also be smart and carry a high amount of football IQ. Quarterman possesses a great amount of football IQ as he is incredibly effectively at sniffing out plays and reading his keys. The bad news for opposing offenses is that once Quarterman has you in his sights, there is nowhere to run. He locks onto his target and attacks. Watch as he quickly sniffs out this screen pass on the play above and makes a tackle for a significant loss.

Quarterman is a ton of fun to watch but does that mean he does not have his own share of faults? Unfortunately, not. While he makes more plays than he misses, his aggressiveness can get the better of him sometimes. Take the play above for example, instead of trying to control the fullback and making a play on the ball carrier, Quarterman goes for the big hit and the running back slips right by him as a result. The Miami linebacker is also prone to over pursuing some runs which leaves him out of position to make a play on the football.

Coverage is also not an area in which Quarterman particularly excels in. While his downhill speed may be sufficient, his lateral ability in coverage does not match. He is a second too late on crossing routes over the middle and this will likely result in him being your two down linebacker who is substituted out on obvious passing situations.

While his limitations in coverage may hinder his ceiling, it is hard to find a more proven run defender than Quarterman. It is no easy task for a freshman to walk in and start from day one but that is exactly what the Miami linebacker did and he did it well. A four-year starter who plays with a mean streak, there is surely room for Quarterman on every team. Compared him earlier to Vince Williams and I believe their career progression could be similar as well. Quarterman may come in, develop and one day prove to be an effective starter, even if it may just be as a two-down linebacker.

Games Watched: vs Louisville, vs Florida, vs Florida International (2018)