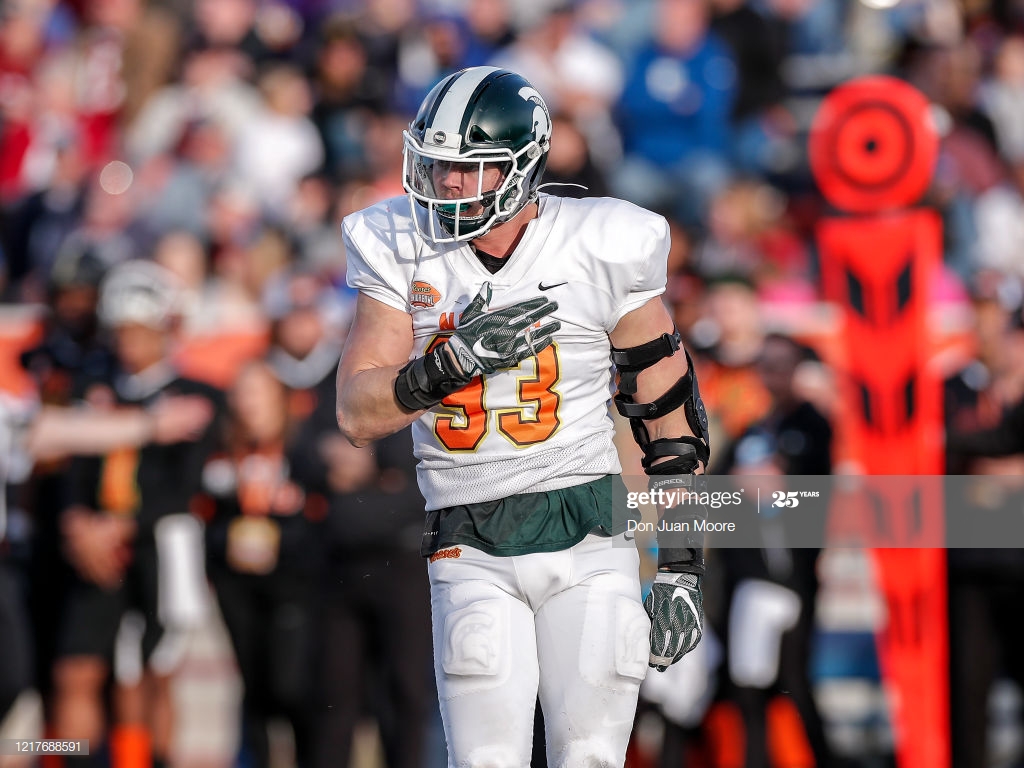 -High energy and effort player; hustle plays sprinkled all throughout film
-Quick first step to chew up yardage and get into the backfield
-Plays with a low pad level, allowing him to win against bigger tackles
-Smart defender that processes quickly
-Good lateral speed to defend in the backfield
-Fast, powerful hands defending the run
-Plays with an obvious chip on his shoulder and is out to prove something on every snap
-Fluid, easy mover along the LOS

-A tad undersized for the position with relatively short arms
-Slow to convert speed to power as a rusher and struggles to work in counters
-Can be overpowered at point of attack by physical tackles
-Pass rush plan is extremely predictable; relies far too much on first step quickness to win off the edge
-Uncomfortable in space and never played standing up

-Holds Michigan State school record in tackles for loss with 51
-Two-time First Team All-Big Ten selection in 2018 and 2019
-Named Team MVP in back-to-back years (’18 and ’19)
-Sits third all-time in the MSU record book with 26 career sacks
-Won the 2019 Burlsworth Trophy, given to nation’s most outstanding player who began his career as a walk-on
-Played in 40 career games with Spartans, starting 26
-Finished four-year career with 229 total tackles, 51.0 tackles for loss, 26.0 sacks, four pass breakups, four forced fumbles, and five fumble recoveries
-Competed at the 2020 Reese’s Senior Bowl, recording two sacks in the game
-Invited to the 2020 NFL Scouting Combine, where he clocked a 4.87 40-yard dash, 32 reps on the bench, a 32.5-inch vertical jump, a 119-inch broad jump, and a 7.39 3-cone drill

If you love a good walk-on story that goes from rags to riches, Michigan State EDGE Kenny Willekes is your man in the 2020 NFL Draft.

Willekes is an absolute relentless defender that plays with a sizeable chip on his shoulder every snap, wanting to outwork the big-time recruits and show just how good of a player he is.

That became very apparent on film right away, especially when defending the run.

Willekes is so smart and wants to outwork the guy across from him. I love the initial first step to get even with the tackle, and then the secondary burst to cross his face and make the stop in the backfield. Some guys have a motor that burns hot; others don’t. Willekes has it.

Don’t try and block him with a tight end either.

That’s some impressive stuff right there.

His first-step quickness, especially when shooting into the B gap, is insane.

He’s not an explosive guy by any means, but his first step is a blur. That’s Ohio State left tackle Thayer Munford that he crosses and makes the TFL on Mike Weber Jr. on in the backfield.

That first-step quickness and ability to shoot gaps could be his calling card in the NFL.

His processing is pretty darn good for a defensive end that plays exclusively with his hand in the dirt.

Against Ohio State in 2018, Willekes was everywhere. Thanks to film study, he was able to recognize the formation and the screen pass to the wide receiver coming, allowing him to come all the way from his defensive tackle spot to make the TFL.

As a pass rusher, Willekes relies so heavily on winning with the first step off the edge. When he can’t win with the first step, he relies on his effort level. However, that’s not always going to work in the NFL. He doesn’t have much of a rush plan overall, rarely works counters, and can’t convert speed to power.

A pass rusher with a counter would have worked back inside here. Instead, Willekes tries to work a bull rush to collapse the pocket. He doesn’t move the tackle anywhere.

Overall, I really like Willekes as a run defender who can cause havoc in the backfield. As a pass rusher though, he needs to either shoot gaps or pray he wins with the first step off the ball or else he’s going to get stymied a ton in the NFL.

Don’t ever count out a former walk-on who has a motor as hot as Willekes. I could see this guy having a nice, long career in the NFL as a strong side run defender that can offer some speed as a pass rusher. I’d bet he will be a special teams demon too.

He’s the type of guy you want rounding out the bottom third of your roster year after year.