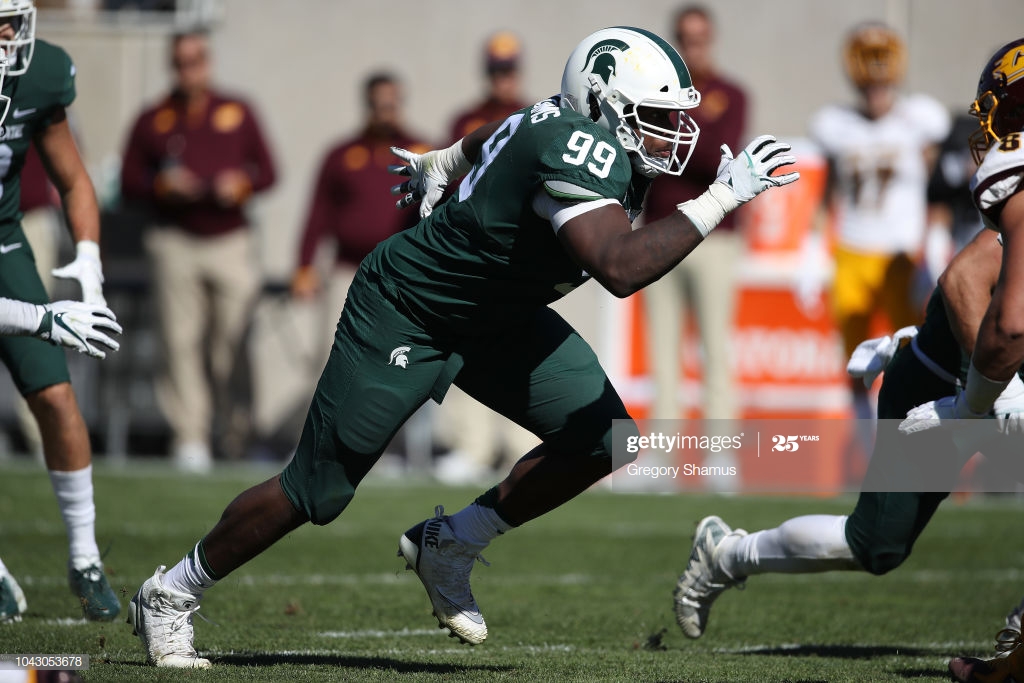 The interior of the defensive line is going to be a big need for the Pittsburgh Steelers and there are certainly a ton of prospects who make sense for them. If they choose to hold off and wait until the latter portions of this year’s NFL Draft, Michigan State DT Raequan Williams could help them alleviate the loss of Javon Hargrave. Williams is a big defensive tackle that comes with a great amount of experience, character and talent.

Williams’ greatest strengths are his upper body power and his ability to keep his hands always moving against opposing offensive lineman. He works quickly by engaging with his hands, keeps a good pad level and is able to hold his own at the point of attack. When you think of your defensive tackle, many think of short yardage situations. It is usually the offense’s strongest guy against the defense’s strongest guys and most of the time that means running right up the gut. It is up to the defensive tackle to make sure offenses do not break down the front door. Williams does a good job holding down the fort above as he beats the Wisconsin lineman across the line of scrimmage and the play goes for no gain.

The Michigan State defensive tackle also does a good job at disengaging with blockers by using his hands to fight his way off blocks. Watch on the play above as the left guard plunges toward him for the second level and Williams makes quick work of him by swimming over his block. He then quickly wins outside leverage on the pulling center and is able to wrap up the ball carrier after a small gain. Williams’ motor runs hot and when combined with his active hands and upper body strength, this makes him great at fending off blockers. He also shows good awareness by finding the football relatively easily.

Here is one of my favorite reps from Williams’ tape. Not a whole lot of flash but just a nicely executed play that shows great technique. It is a run to the outside and Williams immediately starts working laterally to maintain his leverage. He once again beats the opposing lineman across the line of scrimmage and he wins the leverage battle. If this run spills outside, Williams is in a position to make the tackle as he has outside leverage on his lineman but he is also forcing the ball carrier to cut back into the heart of the defense, which he does for no gain. The trenches do not get a whole lot of glamour but they are instrumental in run defense. Leverage is very important and this is one aspect that Williams scores a high grade in.

Moving on to Williams’ performance as a pass rusher. He finished 2019 with five sacks and has recorded 11.5 sacks over the course of his MSU career so there is certainly something there to work with. Much like in the run game, Williams wins his pass rush reps with his active hands and upper body strength. He shows off a nice bull rush on the play above as he walks the offensive lineman back into the pocket. He gets his arms in a good position and drives him backwards. He checks the boxes here for strength and pad level.

The Michigan State defensive tackle will also demonstrate a swipe or swim move on most occasions. The swim move is on display above and while he slightly misses his target, hitting the offensive lineman in the head, the selling point here is how quick and active Williams keeps his hands on each and every snap. While he may never be an elite interior pass rusher due to a lack of explosiveness, there are some signs of optimism.

Occupying double teams is another part of the process when evaluating defensive tackles, especially in a 3-4 defense. This is not typically an area where Williams excels in as his lack of lower body strength really shows itself here. He is highly susceptible to getting combo blocked. Watch on the play above as he is driven off the line by the opposing lineman and then sealed off from the play.

Williams is also not the guy who is going to shoot the gap and explode out of his stance. He is a lot more sluggish and his movements do not flow organically. He is bullied off the line here, ending up on his backside as a result of those shortcomings. The release on the play above is a tad too slow and shows some of Williams’ athletic shortcomings.

While Williams may not be an instant plug and play starter at the next level, he could rise to that in the near future. He has all the assets needed to be a solid run stuffer and while his pass rush potential may not be as high, it is not obsolete. His pedigree and experience also give him a helping hand. Starting 42 consecutive games in the MSU is highly impressive and gives Williams some valuable experience, especially as the outlook on rookie minicamps and OTAs look murky at best. If the Steelers are looking to replace Hargrave through the draft, Williams may not be their first choice but he would be a suitable candidate to bolster the interior depth should they choose to address the defensive line a bit later in the draft.

Games Watched: vs Wisconsin, vs Arizona State, vs Ohio State