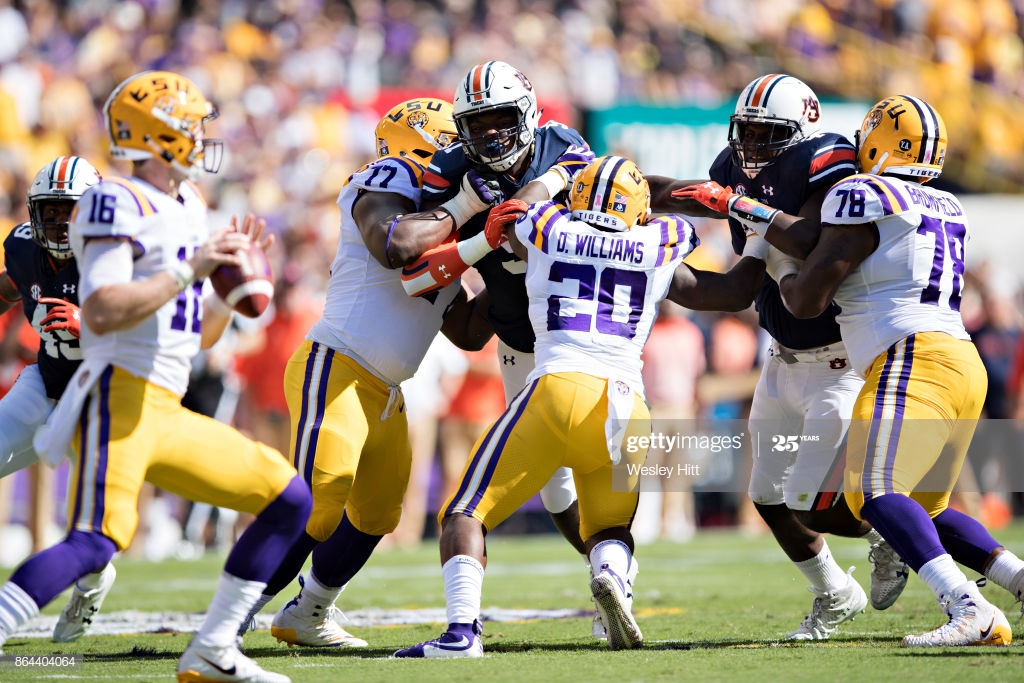 Going out as a national champion is probably the best way to end your collegiate career so Saadhiq Charles gave up his final year of eligibility to enter the NFL Draft. He was the left tackle for the majority of his playing time at LSU that ran a primarily inside Zone running scheme.

In the passing game, he shows solid quickness out of his stance and sets up with good knee bend, balance and depth with his kick step. He has very good pad level and footwork to mirror speed rushers on the outside with good hand placement on the chest and hip of the rusher. Against power rushers he is solid overall and shows the ability to reset his feet and slow the push.  He looks comfortable and plays under control picking up stunts and twists from his right. I didn’t see him asked to get out on screens but I’m confident in his athletic ability to do so.

At Alabama, he shows good footwork to slide with the rusher up the arc.  This a little bit of lean but the hands are in good position on the chest and hip.

Vs Georgia, he uses hand placement, balance and footwork to sustain, and sustain and sustain this block.

In the run game, on inside Zone runs he has solid quickness out of his stance plays with very good leverage in one on one situations and using solid hand placement and good footwork to position himself between the defender and the runner.  On combo blocks he displayed good aggressiveness to get the initial push before moving to the second level where he was solid breaking down and walling off smaller defenders. He was solid on the front end of outside Zone runs to drive his man toward the sideline. They didn’t play a lot of Gap/Power in the running game but he shows solid push on down blocks, good push in double teams and the agility to pull to his left (I didn’t see him pull to the right).

At Auburn, here is an outside Zone to the right and he’s able to drive the DE toward the sideline to open the lane behind him.

At Auburn, he’ll get push on the down block portion of the combo block but is a little late to the second level is able to engage the LB.

At Alabama, he shows good footwork and leverage to get inside the defender and open the lane behind him for the runner.

Overall at the snap he was just a tick late. He will lean into his man when pass rushing setting him up for becoming off balance. He allowed more pressures to the inside on jab steps, swims, twists and spins and needs to improve on speeding up laterally to the inside to cut off the rushers.  Gives up to much ground early in his anchor and adding core strength could help there.  On combo blocks, he needs to quicken his release timing to get to the second level. He has adequate quickness on the backside of outside Zone blocks and doesn’t get his head across to reach and has adequate timing and execution of cut blocks. He doesn’t move people on drive blocks.

Vs Georgia, he sets up to far outside and the defender tacks advantage with the spin to the inside

Vs Georgia, in the red zone he’ll try to cut off the defender to the inside but isn’t quick enough and ends up on the ground

Overall, Charles has good athleticism, plays with very good pad level, has good footwork and positions himself well in the run game. He also has age on his side turning just 21 this summer.  He needs to improve his quickness overall at the snap and in the passing game improve his anchor and quickness to handle rusher to his inside. He’s best fit in inside Zone running game but has the agility to be used in Gap/Power concepts as well.

Physically his body type and length points more to playing guard but players of his size have succeed at tackle.  I think teams will try him at both tackle and guard based on need and wouldn’t be surprised if he played guard for a couple years before moving to tackle.  That positional flexibility along with his age makes him a desirable prospect but teams will have to determine if his mistakes are behind him.