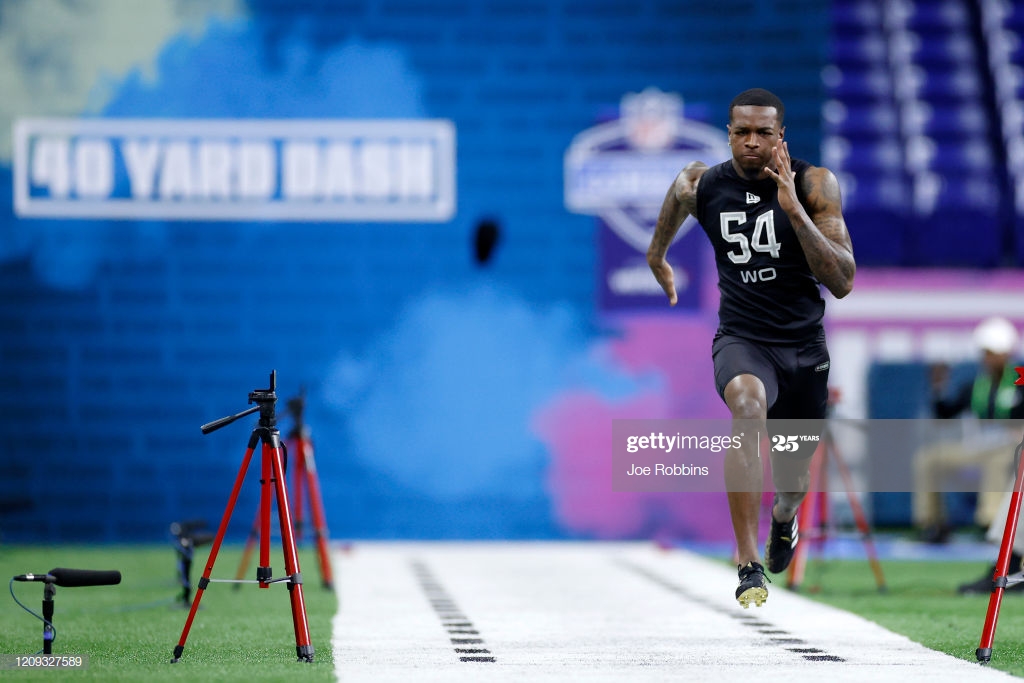 If you like speed, Quez Watkins is someone who should interest you.  He clocked the second fastest official 40 time among wide receivers at the Combine with a 4.35. He comes out of Southern Mississippi where they ran a spread offense and saw an increase in his yardage in each of his three years.

In the passing game, he lined up most often as the X or in the slot in an offense that ran a lot of 10 and 11 personnel packages. Against Off Man or Zone coverage he shows good acceleration at the snap and is able to get on the DB quickly. He uses quickness primarily to create separation and gets solid separation overall. He did most of his work in the short (shallow cross, whip, out, screens) and the deep areas (go, post, corner, drive). He ran some routes in the intermediate levels with dig routes and on the deep comeback route showing a good hip drop and throttle down. He has very good hands, natural away from his body, and a solid ability to adjust around his frame and track the ball over his shoulder making some tough catches on the sideline. He didn’t run a lot of inside stopping routes vs Zone but when he did he showed solid awareness to find the open areas. If he gets the ball with some space he can cover lot of ground in a hurry.

Vs Alabama, he uses acceleration and COD to create separation to on a quick pass and gets up field quickly.

At Louisiana Tech, at the bottom of the screen he’ll go up in double coverage to make a contested catch.

Vs Western Kentucky, he uses a little stutter and speed to get over the DB. The QB floats the ball but he adjusts well to make the sideline catch.

Vs Tulane, from wide right he run a deep crossing route, using agility at about 10 yards to avoid the DB and get over the top of him and tracks the ball nicely.

AT UTSA, here is what he can do in space vs Zone coverage. Take the Dig route, turn it up field and take it 78 yards.

He had trouble against Press Man coverage as DB’s were able to hinder his at the LOS and slow his release.  He decelerates out of his break on routes which you don’t want to see from anyone but especially with his speed. He pulled up on some in breaking routes when heading toward traffic. Like most college receivers his overall route running needs to be cleaned up. After the catch he did show the strength to break tackles of create extra yards. He is a willing blocker in the run game getting in position with hands inside but effort needs to ramp up and he didn’t have the play strength to stay engages for very long. He had some runs over his career but they were largely unproductive.

At Alabama, he’s at the bottom of the screen and will face Press coverage. He works to disengage with 4 left arm swipes but can create separation.  Alabama played a lot of Press against him.

The NFL loves speed so that alone will likely get him drafted but he has very good hands, can be used in a variety of way and was solid in contested sideline catches. He was open often on deep balls missing out on some opportunities due to QB accuracy. He needs to improve against Press coverage, clean up his route running and refrain from decelerating out of his break to use his speed to his advantage.

He could be a 4th or 5th receiver, likely in the Z position to be the outside speed guy to take the top off the defense but if a team uses him in motion or in stacked/bunch alignments it will help get him a clean release off the line of scrimmage. He has some punt and kickoff return ability as well that could help his chances. If you can get him in space, he can make some big plays.

Games Watched:  2019 – At Alabama, At Louisiana Tech, Vs Western Kentucky, Vs Tulane