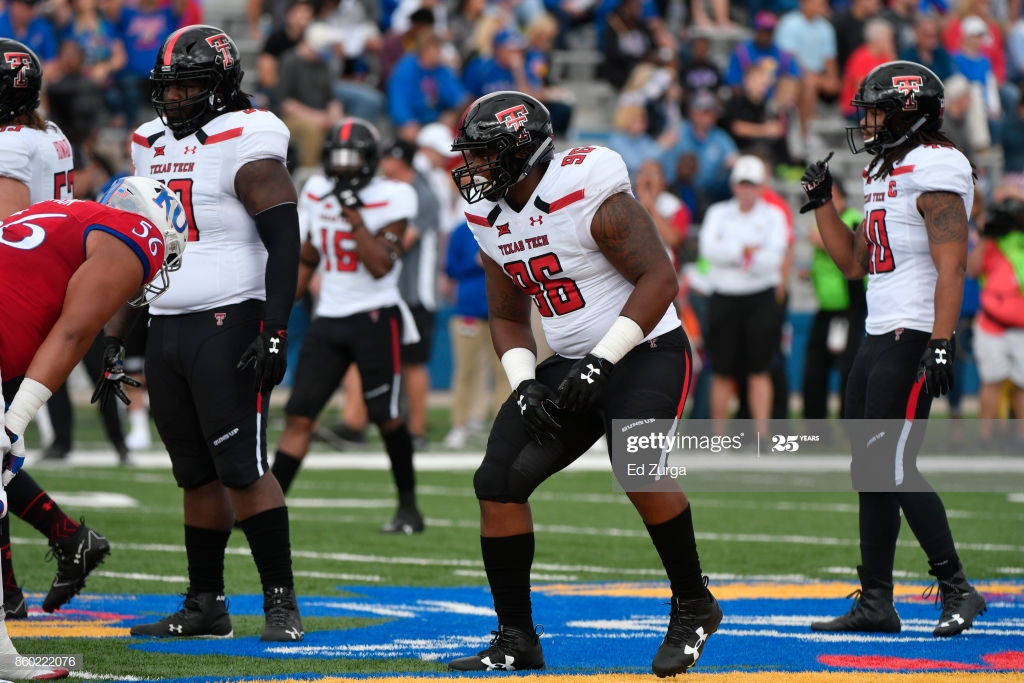 It was a busy off season for Broderick Washington. He played in the NFLPA Bowl and then got a late call up to the Senior Bowl and made some plays there.  At Texas Tech he played in an odd man front primarily in a defensive end position but lined up everywhere along the defensive line.  At the Senior bowl he played inside at the 0/1/3 tech and that will be his position at the next level.

Against the pass, he has solid quickness at the snap and showed some quickness to pressure in the B gap. He has solid hand placement to power rushes and will attempt clubs and chops to get the offensive lineman’s hands down. He has a good motor, shows a lot of effort on pass rushes and shows good pursuit to the QB. On third and long he would move inside showing a good punch and solid push with bull and long arms to collapse the pocket. He displayed good awareness to get his hands up when his pass rush was unsuccessful and demonstrates good awareness to recognize screens.

In the Senior Bowl, he is the 1 tech (white helmet) and will use a long arm/stab to the chest of the RG and get in on the sack.

In the Senior Bowl, again lined up as the 1 tech with will bull the LG back into the QB’s lap to get the pressure.

In the Senior Bowl, he shows good recognition to identify the screen and the motor to chase outside and make the tackle.

Against the run, the played a mostly 2 gap scheme but mixed in some 1 gap as well.  In 2 gap, he has solid quickness at the snap and has good placement and play strength to keep the OL at an arms length. He plays with solid leverage and reset the line of scrimmage. He shows good lateral agility to slide with Zone blocks while engaged to disrupt the running path and was assignment sound when taking on pullers, setting the edge or playing on the backside.  His effort is high and showed improvement handling double team blocks. In one gap, he showed good quickness to split gaps including short yardage and red zone situations. He’s a good tackler and will chase all over the field.

At Arizona, he is the defensive end on the right side and with take on a double team with good leverage and fight through it to make the tackle.

At Oklahoma, he is the right DE and will chase the play from the backside and make the tackle.

The majority of his pass rushing came as a DE on the outside and he doesn’t have the quickness or pass rush plan to be effective out there.  He would get locked up with OL and must improve his use of hands to disengage. He was very limited in his pass rush moves however a move inside could help. In 2 gap, he has some workable issues. He needs to improve core strength to stay square to the LOS.  He gets focused on driving back the OL and will lose sight of the ball. He has the ability to disengage he just needs to do it quicker and more consistently. His balance was a little erratic and will get bounced around when he doesn’t play with good technique.

At Arizona, he is the left defensive end and plays with good leverage to drive the RG into the backfield but his head is down and misses the RB running right behind him.

At Oklahoma, he is the 0 tech and has solid quickness and a good initial punch to knock the center back but after that there isn’t much of anything with his hands to free himself.

I think there is some really good potential here. Washington has experience playing in different schemes and all along the defensive line.  He has a high motor, solid quickness, good hand placement and pursues the ball well.  He needs to add strength, disengage quicker and improve his pass rush if he wants to stay on the field for 3 downs.

Based on size and the move inside in the all-star game he’s going to play inside in the NFL and I think that could help his pass rush. He should at least be able to use power rushes vs IOL. I think he is scheme diverse and will fit in initially as a backup at the 0/1/3 tech with the potential to start down the road.