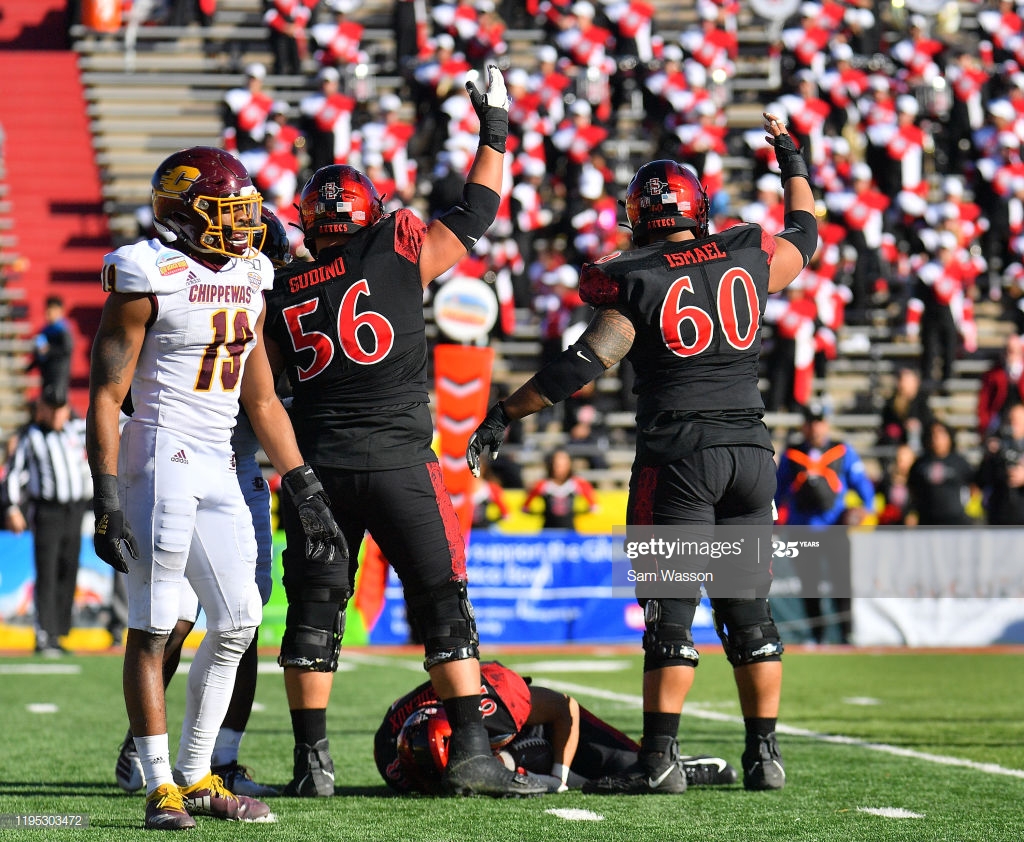 Tucked out west we have another experienced player along the interior offensive line.  Keith Ismael is a three year starter with the bulk of his work coming at center but has also started games at both guard positions San Diego State runs a lot of Zone runs but sprinkled in some Gap/Power running as well.

In the passing game, he shows good quickness at the snap to get his hands in position and plays with a good balanced base. He has good punch timing and solid recognition of stunts and twists. He has good agility to mirror rushers inside, move with the offensive line in slide protections or curl to the outside on bootleg blocks. He has a solid anchor and plays with good leverage. He has the mobility to get out on screens.

Vs Arizona State, he’ll get his hands inside, is able to control the DT and hold him at bay

At Colorado State, he’ll pull to the outside show a nice chop to the defenders right arm and flip his hips around to seal him off.

In the run game, on Gap/Power blocks he again shows good quickness out of his stance and is solid on down and double team blocks playing with good leverage and keeping his legs churning. He has good initial hand placement and works to keep them in a good position. He has good mobility to pull and lead on runs showing good awareness to pick up the most dangerous defender. I only saw him do this from the guard position but I think he could also pull from center. On Zone runs, he shows good push in combo with good timing to the second level. He has very good quickness to the second level and can swallow up smaller defenders and drive them out of the picture. On outside Zone runs he has good quickness to execute reach blocks and flip his hips around to create a lane. Very good effort to sustain blocks and play to the whistle.

At Stanford, he’s playing right guard and will pull to the right showing good footwork, agility and mental processing to pick up the most dangerous defender.

Vs Arizona State, playing center he shows his quickness to the second level to cut off the linebacker and clear the lane.

At Colorado State, he’ll combo the DT with the RG and gets a good push before picking up the LB and driving him out of the screen.

His arm length is right at the bottom of the threshold that you want and the lack of length minimizes his punch strength.  Long armed DT’s will give him some issues so countering with his hands will be necessary. When uncovered you’d like to see a little more aggressiveness to help out his teammates. Will need to add some core strength to help him stay square against yanks and clubs vs the pass rush.

At UCLA, the protection will slide to the left and the DT is able to shed him to the side and he’ll give up the pressure.

He’s not a people mover in one on one situation and relies on positioning. Quick defenders can take advantage of his aggressiveness out of his stance and swim over him. When moving laterally on runs to the outside he can get too far ahead of the defender opening a lane behind him.

At UCLA, the DT will use a long arm to stand him and he can’t get his hands on him to regain control.

Vs Wyoming, the 1T is going to swim over him across his face to get penetration.

Overall, you have to like his mobility and positional flexibility to play all three spots inside.  He’s best suited to play in a Zone running scheme but he can handle Gap as well as long as he doesn’t need to move defenders consistently in one on one situations.  He’s not as long as you would like, needs to add some core strength and could improve some blocks on the move.

Teams that miss out on the day 2 interior offensive lineman will look to Ismael a bit later.  He’ll benefit with a year or so as a backup but I can see him starting in the near future.