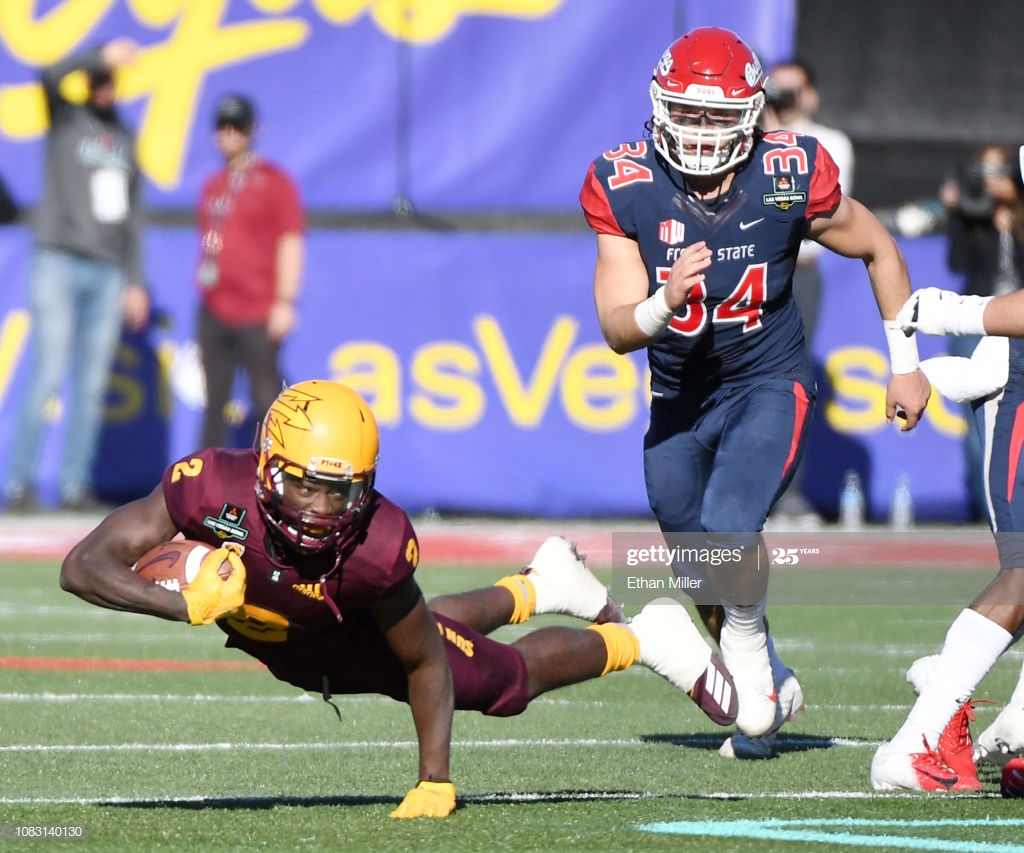 – Average frame, thicker lower half but not physically imposing
– Good vertical speed but wins more with quickness and route running
– Higher variance player than you’d like, battle of peaks and valleys in his game
– Inconsistent hands and drops too many passes
– Will struggle with most physical corners who press, can get stalled for too long at the LOS
– Doesn’t win enough in contested/jump ball situations
– Recent injury/medical concerns that’ll need to be evaluated
– Limited starting/D1 experience, one season of serious production

Brandon Aiyuk is a bit of a polarizing player. On tape, you get some impressive highs. You also get some frustrating lows. But let’s start with the good.

Aiyuk is an impressive, advanced route runner for a guy who hasn’t played a lot of college football at the D1 level. He deals with press better than most receivers who, let’s be honest, rarely even see it. But he played the “X” spot most of the time and in 3×1 looks, often had the cornerback rolled up on him. He wins with quickness and burst off the line, like this slant for a TD against USC. Bottom of the screen for the score.

And this might be my favorite play of his. His ability to keep his speed through his cuts and after the catch is impressive. Takes his Bang 8 to the house. Again, at the bottom.

But there are some negatives too. His hands aren’t great and he drops too many passes. Couple examples.

That’s his biggest issue on tape. He’ll make a great play and follow it up with a drop or lose out in a contested situation. To the present day, he battled injury through his senior season and pre-draft process, opting to undergo surgery right before the draft that will make teams scramble to figure out his rehab/recovery. There’s pros to getting the surgery taken care of sooner than later, especially with the uncertainty of football in the fall, but it’s another layer teams have to work through on top of him playing FBS football for just two years and one as a starter.

Overall, he’s a quick, fluid player with very good athleticism who can win at most levels, especially the short/intermediate game while making an impact in the return game too. It’s a deep WR class and he could slip a little but he’s likely to go early on Day Two if he doesn’t hear his name called in the Top 32. Hard to find a perfect comp but a little bit of a Stefon Diggs’ vibe when it comes to their route running.

Games Watched: at Michigan State, vs Colorado, vs USC, vs Arizona