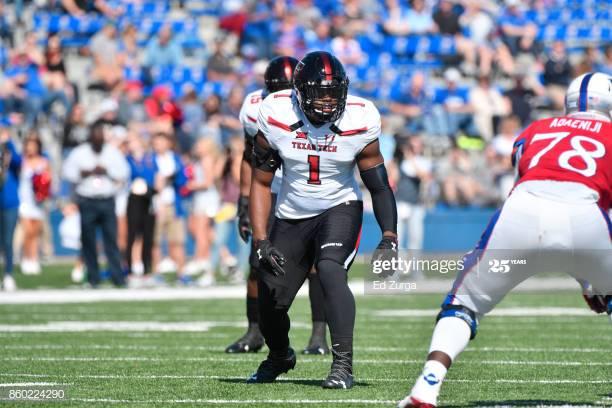 Jordyn Brooks is a four year starter for the Red Raiders and his production shows it.  He led the team in tackles twice, had over one hundred in his senior year and that included an impressive 20 tackles for a loss. He played the middle linebacker in the defense this year and has experience playing outside in previous years.

Against the pass, he played the majority of the time as a spy on the QB on passing downs.  He shows good agility to mirror the QB with very good burst and closing speed to chase down the QB when the chance arrives. He was use occasionally in Zone coverage in the middle of the field or to mirror RB’s on swing routes. As a blitzer, he has good acceleration and can disrupt the backfield in a hurry with a clear lane. He displays good awareness to get his hands up in passing lanes when the rush doesn’t get there.

Vs Texas, he’s spying on the QB and will show his burst and speed to chase down the QB.

Vs Oklahoma State, he’s going to blitz here, avoid the RB block attempt and get the force the fumble on the sack.

Against the run, he is solid at diagnosing inside Zone runs and good at diagnosing outside Zone and Gap/Power runs, reads pullers well and plays with good aggressiveness to get to the ball.  On lateral runs, he shows good agility to flow with the play and when he sees a gap has very good acceleration to zip through traffic to the ball. He is a solid tackler most effective wrapping from behind and dragging down. He has a good motor and will chase sideline to sideline.  When he played on the edge he was willing to take on blocks on the edge to force plays inside.

At Arizona, he’s the middle linebacker and diagnoses this well reading the two pulling OL and finds a gap behind them to make a TFL.

Vs Oklahoma State, another good example of him reading the blocking scheme and getting downhill to make the tackle.

Vs Iowa State, he’s standing up over the center and at the snap will attack the center, drive him into the backfield and chase down the RB.

He weighed in at 240 but looks lighter. His experience is pass coverage is not what you would like.  He has some Zone experience and a little Man experience in previous years but doesn’t look like he has a good handle on coverage as evidence by his lack of ball production. On blitzes, he comes out of control and the QB can side step him fairly easily. There is some hesitation diagnosing inside runs allowing time for the OL to come out to him instead of getting downhill to fill gaps. Against inside runs, he doesn’t use his hands well taking on blockers and prefers to try to work around them.  Tackles too high coming downhill and doesn’t have a lot of pop.

Vs Texas, he’s the linebacker to the left of the screen. Texas is going to double the 3 defensive linemen and he’s initially in good position in the B gap but as the RB cut’s out, he goes in, leaving a big hole

Vs Oklahoma State, you’ll see him knife into the backfield and wrap high around the runner and can’t get him down.

Athletically he is what teams covet in off the ball linebackers. He can find the ball, work through traffic and get to it in a hurry.  He has experience at different LB positions, can make plays in the backfield and be a spy on the QB on passing downs.  He needs to improve on filling holes and taking on blocks inside, tackling with better leverage and teams need to determine what he can do in coverage.

I think Brooks can play the BUCK position in a 3-4 or as a MIKE or WILL in a 4-3. He’s also scheme diverse but I like him best in a 2 Gap scheme where the D-line can keep him clean and let him attack the runner. In coverage, it would have to be a Zone heavy scheme where he can also be used to spy on mobile QB’s in sub packages.  He may start off as a WILL to let him use his speed and chase with a possible move to inside later.