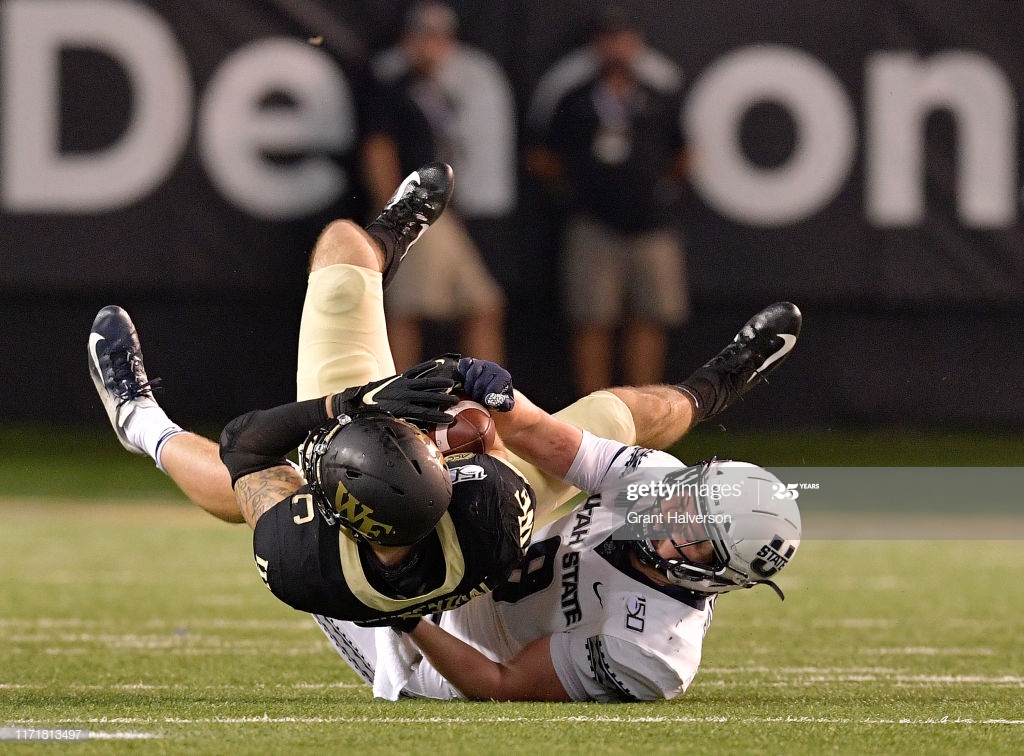 -Quick processor with a good, quick first step
-Consistently finds himself around the football and has a knack for punching the ball out
-Showcases ability to slip blocks and make plays around the line of scrimmage
-Sound tackler that rarely misses
-Tape study is evident on film; knows what’s coming often and reacts quickly
-Comfortable dropping into zones and squeezes down throwing windows
-Disciplined in pursuit and rarely takes bad angles to the football
-Efficient, effective blitzer with good short-area burst

-Lacks adequate range outside of the tackles
-Struggles to carry down the field in man coverage; a bit stiff overall in man turning and running
-Small frame with short arms for the position
-Needs to stay clean and flow freely to have an impact; won’t stack and shed consistently against the run to make plays
-Frame doesn’t appear to have room for added bulk/weight
-Pad level is a bit high overall, leading to poor tackle form at times
-Long history of injury concerns

As we move deeper and deeper into the pool of NFL Draft prospects, we start to find some intriguing small-school guys that really excite you with film and production.

I’ll be the first to admit I don’t pay attention much to Utah State football, but man did Woodward jump off the screen instantaneously for me.

Woodward doesn’t have a ton of range and isn’t the most athletic guy on the field, but he processes very quickly and has the ability to slip blocks against bigger linemen to make plays.

Here in 2018 against San Jose State, Woodward is on the move as soon as the ball is snapped, causing him to be a moving target for the interior lineman trying to climb to the second level. That allows him to set up the lineman, slipping inside to make the stop.

He’s very efficient and effective as a blitzer, too. He can get skinny and knife through a hole without being knocked off line.

You can see he doesn’t telegraph the blitz, reacting after the ball is snapped. He has really good short-area burst and quickness, which is one display here, allowing him to cross the face of the lineman to make the stick and stop in the backfield for the TFL.

While he has a small frame for the position and lacks length overall, he has decent technique to keep himself clean at times.

Most linebackers had tough games against LSU’s offensive line, which won the Joe Moore Award in 2019 for college football’s best offensive line in the country. This rep here though by Woodward was pretty darn good.

Yes, he slides a bit too far over the hole, opening up space, but watch the quick punch inside with his right arm to keep himself free, and then has the ability to slide off the block to make the stop short of the sticks.

One thing that is apparent all throughout Woodward’s film is his game tape work and overall preparation. He diagnoses so quickly and is always in the right spot. He reacts before plays develop and is always around the football. There’s a reason for that.

Check out this screen that he blows up against San Jose State. He’s coming downhill to make the stick on the receiver before the ball is even out of the quarterback’s hands. You can see his eyes flash outside to the receivers and the routes developing, and then he keys on the blocker working towards him, causing him to fire downhill for the big stick.

One issue I have with Woodward overall is his range and pad level.

He’s a step slow to process the play here and doesn’t have the overall speed and range to recovery quickly enough. While he does end up making the play, look at the technique on the tackle; it’s not great. That’s not going to work in the NFL against professional running backs, going that high to make a stop.

Overall, I like Woodward’s ability to process quickly and put himself in the best position to succeed often. If you’re not going to be the fastest or strongest, be the smartest and most prepared; that’s Woodward.

All that said, injury red flags jump off the chart to me, including concussion issues. If he can clear some medical hurdles, I think he can be a solid depth piece and a good special teams player right away.