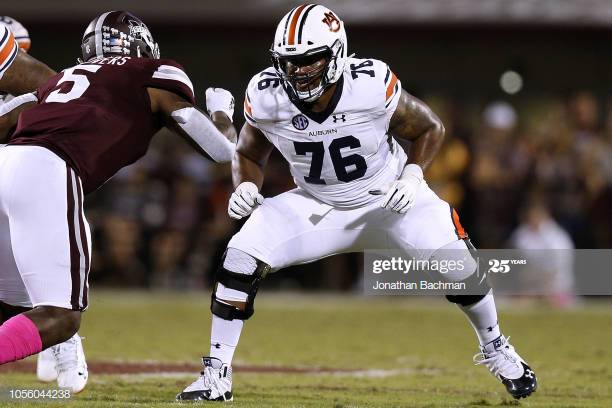 The native Nigerian thought he might have a future in basketball when he came to the United States but gave football a try as well.  Turns out it was a very good move for him. He became a fixture at left tackle for Auburn and looks the part of the blindside protector with good length and good agility.

As a pass blocker, he has solid quickness out of his snap and displays good footwork, balance and agility to mirror the defender up the outside. He has solid hand placement overall with a good punch that can stun pass rushers and has shown quick chops to keep the DL’s hands down.  He uses good half man positioning which allows him to stay inside the defender and handle counters to the inside.  He has a good anchor playing with balance and good pad level to handle power rushers. He shows good mental processing on twists comfortably able to pass off and pick up. He moves well on screens to get wide and downfield with ease.

Vs Purdue, he’s the left tackle and has good form, balance and footwork to slide out. When the defender cuts inside a beautifully placed stab with the right arm stands him up.

Vs Georgia, he’ll face a speed rush up the outside and as the rusher reaches with his left hand his slaps it down to get him off balance and control the rep.

As a run blocker, he had the benefit of Auburn using Inside Zone, Outside Zone and Gap/Power running plays. On Inside Zone, he used good body position and play strength to turn his hip and wall off defender to the outside, good agility to cut off the defender shaded to the inside and showed good mobility to the second level and execution to take out linebackers. On Outside Zone he uses solid lateral agility to try to get into an advantageous position and works to get a push on his man. In Gap/Power run, he has the ability to play with good leverage and get a good push on drive blocks.  He collapsed defenders inside on down blocks and gets a good push, playing hip to hip, on double team blocks. He has the mobility to execute on pulls finding his man and driving him out of play. I liked his physical toughness late in the Oregon game playing on a clearly visible limp trying to drive for the go ahead score.

Vs Oregon, he’s going to double the DT with the LG and shows good aggressiveness and pad level before moving to the LB and keep him out of the play.

At Texas A&M, good slide to the inside here with good hand placement and leverage to hold off the defensive lineman.

At Texas A&M, he shows good agility to bump the DT inside before climbing to the second level to engage and sustain on the linebacker.

At Georgia, here he is pulling to his right, turns the corner and introduces himself to the defender.

Consistency is Wanogho’s biggest issue for me. His timing at the snap is inconsistent often being a tad later than the rest of the offensive line.  Against pass rushers on the edge his hands get erratic and will end up wide or high. Less often he will overextend on his punch leaving him leaning and susceptible to swim moves. Until he quickens at the snap, Outside Zone runs might be out of his ability to consistently execute reach blocks. Will get top heavy and lunge at defenders while on the move. His pad level will vary and when he plays high it limits his play strength to move defenders. He looked tentative on some of his pulls not attacking at full speed.

Vs Texas A&M, here he shows poor hand placement with his right hand going over the shoulder of the defender and he has to wrap with his left arm to recover.

Vs Alabama, he is on the right side playing on and unbalanced formation and he leans too far forward and the defender sheds him and makes the tackle.

Wanogho is still fairly new to the game and it shows at times.  Physically he has everything that you would want: size, length, footwork, agility and strength. Technically, he does a lot of things well and when he’s on its really good.  He needs to improve on the technical execution from play to play and become that consistent rock on the left side.  It’s all there but he needs to be consistent with his snap quickness, hand placement, pad level and forward lean.

That being said, I was impressed. I think he has the ability to fix those issues and I think he’s going to have a long career and will be drafted early.  I would not be shocked to see a team move up and take him late in the first round but he should go early day two at the latest.