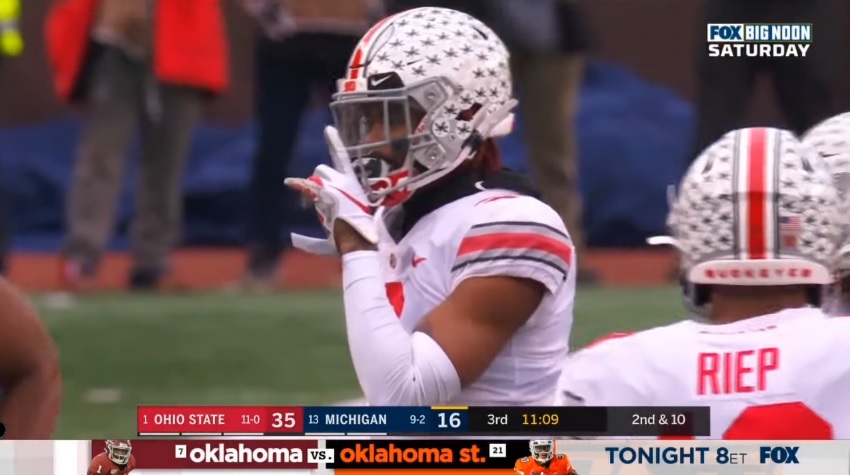 Ohio State CB Damon Arnette opted to return for his senior year and the move paid dividends for his draft stock. Together with Jeff Okudah, Arnette formed a formidable cornerback duo for Ohio State. After a few years of solid play, Arnette really had a season to remember in 2019 as he heads to the NFL fresh off his best season to date.

While Arnette may not be firmly placed in the top tier of cornerback prospects, he is right there behind them. He has great size (6’0) and is excellent in man coverage, especially in press coverage. Those two reasons alone will have teams circling his name as the draft progresses.

Arnette’s greatest strength is his ability to play press man. He blankets receivers and thanks to his size, he is a difficult challenge for opposing receivers. Here he is up against Clemson receiver E.J. Williams who stands at 6’4. Watch as the Ohio State corner is not fazed by Williams’ hand work and works with him efficiently up the sideline. Arnette not only uses the sideline as a second defender effectively but he is pinned to Williams’ hip, leaving no throwing window for this ball. Trevor Lawrence should be grateful that this pass was not intercepted.

You will often hear the phrase that the sideline is a outside corner’s best friend and Arnette really understands how to use the sideline to his advantage. He is a strong corner that can re-route receivers to the sideline with his strong press coverage skills. Watch as he presses the Michigan State receiver with this strong jab thus forcing him down the sideline and narrowing the throwing window once again. Arnette does a good job sandwiching opposing receivers between the sideline and himself.

Another impressive trait that Arnette carries is that he has no problem playing outside or even in the slot. The senior cornerback sticks to receivers like glue and is very smooth in transition when moving laterally across the field. Watch as the Wisconsin receiver motions to the slot below and Arnette moves with him. Even with a subtle stutter near midfield, Arnette is not fooled and is right on the receiver’s hip leaving little room for a throw to arrive.

The senior corner is also comfortable playing in zone coverage as well and Ohio State asked him to play in multiple different zone coverages at times last year. While he shows more promise in press man, Arnette’s biggest play of the year came in zone coverage. He drops back in zone on the play above and picks up the Indiana tight end that is coming underneath the formation. He then jumps the route and takes it 96-yards to the house; the fourth longest interception return in Ohio State history.

Arnette’s run defense has been called into question at times during the pre-draft process but I did not see much concern while watching his tape. This rep against Wisconsin was very impressive. The handoff is completed and there is a huge gap that presents itself on the left side of the offensive line but watch how quickly Arnette comes down and makes the tackle. The Ohio State corner does a good job processing the run fit and filling in the open gap. He also shows no hesitation and throws his entire body into the tackle.

There is not much to critique with Arnette’s play. He is going to be a very solid cornerback at the next level but there are a few minor areas that could present a few problems. He is much more comfortable playing press man rather than off man as it is in off man coverage where a few limitations show themselves. He will have to work on being more disciplined in off man coverage as his hips open up too early at times, leaving him not enough time to recover. That is exactly what happens above as he opens too early and this slant route is completed rather easily.

Arnette is physical. He is going to beat receivers up at the line of scrimmage and it works for him. It has allowed him to be the corner he is today. One worry is how this will translate to the NFL where flags seemingly fly steady. He may have to tone it down just a notch as he progresses downfield or he will be on the receiving end of many flags like on the play above.

The team that selects Arnette is going to be getting a press-man corner who could be ready to start on day one. He does a magnificent job jamming receivers at the line and shows excellent understanding of how to use the sideline to his advantage. His run defense is a lot better than I expected as he is also a pretty solid tackler. While Okudah got all the recognition and for good reason, do not forget about his counterpart as Arnette is an NFL ready cornerback as well.

Games Watched: vs Wisconsin, vs Michigan State, vs Clemson, vs Indiana