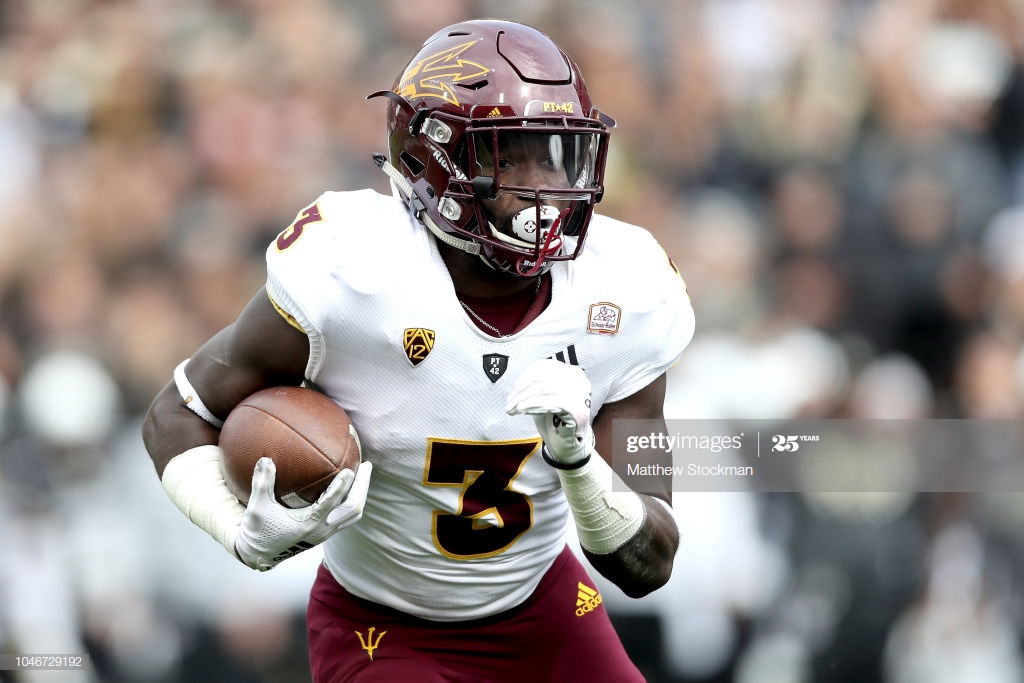 He can run, he can catch. Arizona State running back Eno Benjamin did a bit of it all during his college career. He carried the football nearly 600 times while recording over 80 receptions but it is not just his experience that makes him a compelling player.

The easiest way to describe Benjamin is that he is going to get you what you need and then some more. If two yards are needed, he’s going to get you three. Need five yards? He will get you six. Need a touchdown? Well, he will get you that too. The most eye-popping trait that stands out on his tape is his contact balance. Benjamin runs as if he is trying to run through a brick wall as he runs with immense toughness and determination. Watch him break two tackles on the play above, one tackler being Evan Weaver, perhaps the nation’s best tackler and then watch him finish the run on the Cal defensive back even when he is already in the end zone.

Often times one will compliment a running back for being a finisher, meaning that they finish their runs with authority. They always fall forward; they keep their feet churning through contact and as a result they are able to muster extra yards. Benjamin checks all those boxes as he is a punishing finisher. He not only spins out of one tackle on the play above but he takes the Oregon defensive back on a personal joyride for an extra handful of yards as well. With his proven contact balance and finishing ability, Benjamin is not only going to generate a great number of yards after contact but he will also be a trusted option in short yardage situations.

Benjamin does not just have to run you over either. He is very jumpy and has nimble feet that allow him to juke incoming defenders. His lateral agility can be downright nasty at times as he breaks the ankles and wills of opposing defenses. He also has that magic ability to turn nothing into something. Third and 12 above and Arizona State goes conservative, just handing the ball off to Benjamin. This play should be stopped in the backfield as Arizona has two defenders there but this is Eno Benjamin we’re talking. Watch as he leaves both Arizona defenders bewildered as he is able to escape their grasp and pick up the first.

Now, Benjamin has the strength, he has the elusiveness and as far as physical traits are concerned, he gets a passing grade but how about his vision and mental processing? The Arizona State running back is one of those players that when he’s on, he really turns it on a notch but when he’s off, it can be frustrating. The play above is an example of the kind of wizardry that Benjamin can display when he puts it all together. His vision once he gets to the second level is top notch as he navigates freely through defenses and has the potential to really put together some big runs.

No doubting Benjamin’s second level vision but his initial vision and decision making when pressing the line of scrimmage can be a bit iffy. By all accounts, he should continue to bounce this play upfield but he comes to a halt when he reaches his left tackle. Really need Benjamin to have a better feel for the defense here and explode up the left sideline.

Another issue with Benjamin is his movement can be too clunky and lateral at times. Here is one case where the running back should bounce into the hole and explode upfield, instead Benjamin bounces into the hole and side steps again only to be tackled immediately. This is really just a great play by Cal LB Evan Weaver as well but Benjamin has to hit that hole with more urgency to avoid plays like this.

One factor that Benjamin has working for him is his ability as a receiving option out of the backfield. He has recorded 82 receptions over his college career and comes into the NFL with proven experience as a pass catcher. He has a few drops sprinkled across his tape, mostly due to him turning upfield before he has the football but nothing that really screams cause or concern. He was particularly effective in the screen game and running towards the sideline where he could use his momentum to run wild upfield.

Overall, Benjamin is a prospect that could go anywhere from round three to the early portions of day three. He is a tough, hard nosed runner with some shifty footwork that makes it a viable belief that he could be a starter one day.

Games Watched: vs California, vs Michigan State, vs Oregon