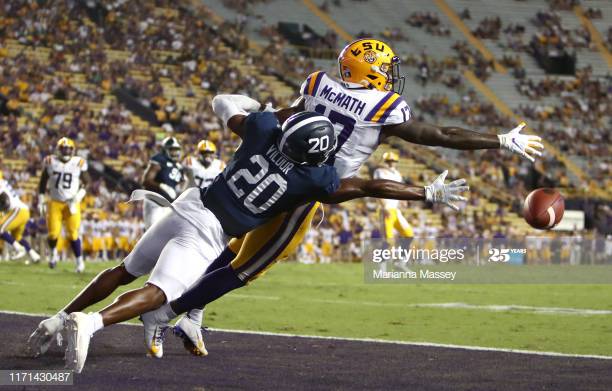 There might not be a better defensive player in the Sun Belt Conference than Georgia Southern cornerback Kindle Vildor. The Georgia Southern cornerback has put himself on the map with his play over the last two years, earning first team selections in 2019 and 2018 and earning an invite to the 2020 Senior Bowl. With his physical play and ball skills (nine career interceptions), Vildor is one of many small school prospects looking to prove they belong in the big leagues.

Vildor is gifted with good length and he puts his long arms to good use. He is very physical off the snap and will out wrestle opposing receivers for the football. His interception above is all of these traits coming in motion. Vildor is physical with the Louisiana receiver, pinning him as he moves up the field and he then is able to control his body and come down with an impressive interception.

Man coverage is his strong suit as it allows Vildor to use his biggest strengths to his advantage. Football is all about being put in positions to succeed and man coverage does just that for the senior cornerback. The play above is an excellent example of that. Vildor is not beaten off the snap, pins the receiver to the sideline and then the finishing touch is him using his arm as leverage to put himself in front of this pass. Had this ball come down in bounds, the Georgia Southern corner would have looked like the intended receiver as he is in excellent position to make a play on the ball.

The first job of a cornerback is to lock down their target. If the receiver cannot catch the football or is not targeted, it is a job well done. But it is also a bonus if cornerbacks can make quarterbacks pay when they are targeted. Vildor made many opposing offenses pay as got his hands on the football quite a bit. With nine interceptions, 25 passes defended and one forced fumble, Vildor was a ball magnet during his time at Georgia Southern. The above forced fumble did not stand but it shows the awareness that the senior cornerback plays with. He is always thinking about taking away the football and there is not much more you can ask out of a cornerback who already comes equipped with coverage skills.

Vildor may have a tough time against quicker and shiftier receivers at the next level. He gets opened up rather quickly by quick footed receivers who can challenge him off the snap. Take a look at how he was beat off the line of scrimmage on the play above for an easy pitch and catch. Minnesota was one of the top opponents that Georgia Southern faced this season which leaves some question over how Vildor’s level of competition that he faced in college will translate over into the NFL.

The Georgia Southern cornerback was asked to play in zone coverage on more than a few occasions. Here he is inside and is responsible for anything shallow in what looks to be a Cover 2. Vildor needs to be more disciplined and do a better job staying true to his assignment as he carries the receiver a bit too far inside, leaving open running room for the check-down option.

Run defense may not a hill to die on when it comes to cornerback play but it can make a world of a difference for cornerbacks fighting for a roster spot. Unfortunately, this will be one area that Vildor needs to highly improve in. His tackling in run defense is highly suspect as he will whiff on his fair share of tackles. Not only that but he could also be a bit more aggressive when attacking opposing running backs. Again, not the end of the world but for a guy who will need every inch, this is one inch that Vildor cannot afford to concede.

There are many prospects coming into the NFL draft, some will see their stocks boosted by the jersey they donned in college. The same cannot be said for small school prospects like Vildor who will have to let their play define them. So how does Vildor’s play define him? Well, he is a feisty and physical corner who uses his length well in press man coverage. He may struggle against quick footed receivers who can challenge him off the snap with footwork but he’s got a lot of fight in him. He has a lot of positives to work with besides his physical skills as his ball skills also speak for themself.

Games Watched: vs Louisiana, vs Minnesota, vs LSU