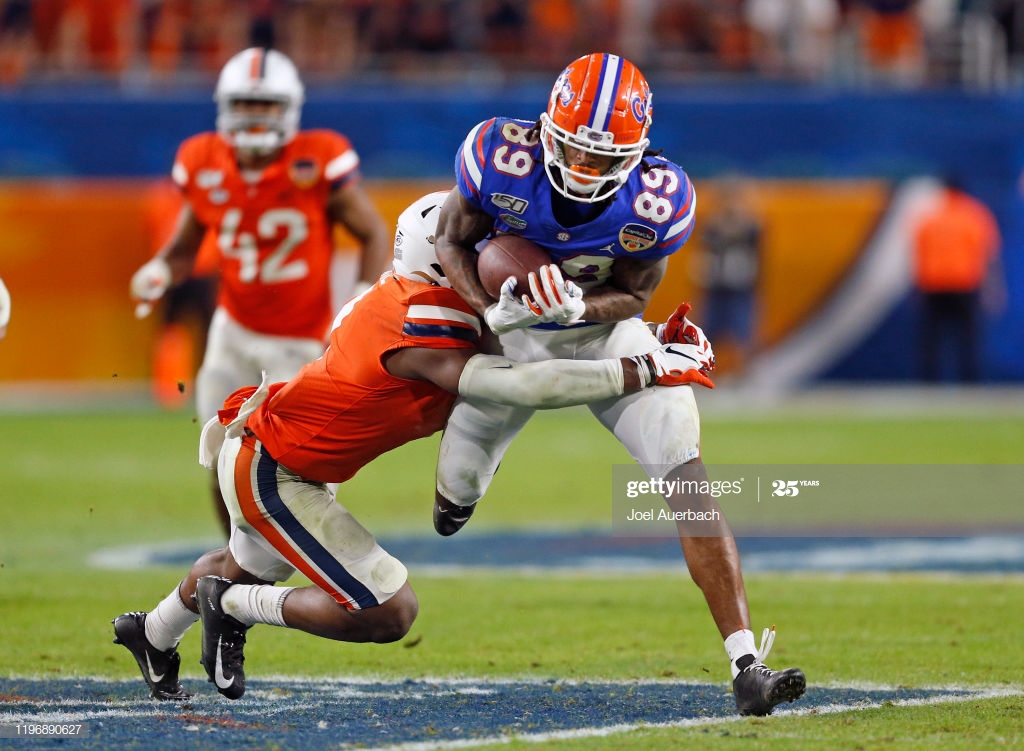 -Good height and length for the position
-Massive catch radius and is very comfortable catching away from his body when needed
-Took a major stride forward with his hands in 2019
-Legitimate straight-line burner with good speed and separation vertically
-Sound, willing blocker that fights his butt off on the boundary
-Has some YAC ability in the open field
-Lengthy history of special teams play as a gunner and returner while at Florida

-Leaves you wanting much more on tape with his traits
-Production as a WR simply isn’t there
-Delayed start to his routes off the line due to a false step
-Rendered non-existent throughout games by physical press corners
-Hasn’t quite figured out how to use his length to create separation within routes
-Limited, simple route tree

-Played in 46 career games at Florida, starting 26
-Finished four-year career with 79 catches for 1,271 yards and eight touchdowns
-Added 242 career kick return yards for the Gators
-Recorded a career-high 25 catches for 351 yards and a touchdown in 2019
– Named to the SEC Community Service Team in 2019
-Finished career with 10 total special teams tackles
-Arrested and charged in July 2016 with multiple felonies after shooting BB guns and causing property damage on campus; charged were later dropped
-Invited to the 2020 Scouting Combine, where he clocked a 4.46 40-yard dash, 13 reps on the bench, a 39.5-inch vertical jump and a 126-inch broad jump

Despite having the right size and really impressive length for the position, Florida senior Tyrie Cleveland leaves you wanting so much more on tape as a receiver.

Fortunately for Cleveland, he offers a bit more to teams as a blocker and a special teams standout, solidifying himself as a Late Day 3 prospect who could slide into UDFA territory, yet still crack a 53-man roster in September.

Right away on tape I saw a guy who fights his tail off as a blocker, showing good initial punch and run fit, while also having the play strength to lock on and battle.

This is my favorite blocking rep from Cleveland overall. Here against Miami (Fl.) to open the 2019 season, Cleveland does a great job sealing the corner to the edge, keeping himself between the defender and the ball carrier.

Even as the ball carrier pushes to the boundary, Cleveland stays engaged, helping his teammate score.

While the first clip is a great rep, the second one shows the lack of focus and effort Cleveland can show at times. He doesn’t really sell any sort of RPO route here, gets caught staring into his own backfield, and allows his defender to make the stick and stop near the line of scrimmage.

Because of his long speed and vertical threat to defenses, that’s allowed him to open up on in-breaking routes after selling vertically. That’s got to be his go-to route in the NFL, should he see the field more as a receiver.

That’s a good job selling vertically, and then decelerating and breaking inside for the easy pitch and catch.

Overall, Cleveland isn’t very physical in his routes and can be negated by physical corners, but this rep against Florida State showed me that he can work through contact and handle himself on short routes as a possession receiver.

Due to his speed and YAC abilities, it was a bit of a surprise Florida didn’t utilize him more on screens throughout his career.

You can see Cleveland uncoil his frame here to reach high for this poor throw, but after that you can see the vision and the explosion in the open field.

Overall, I think Cleveland can have a long career as a special teams player and a depth receiver. He reminds me of a poor man’s Matthew Slater, where he can really thrive on special teams and can play as a receiver in a pinch.