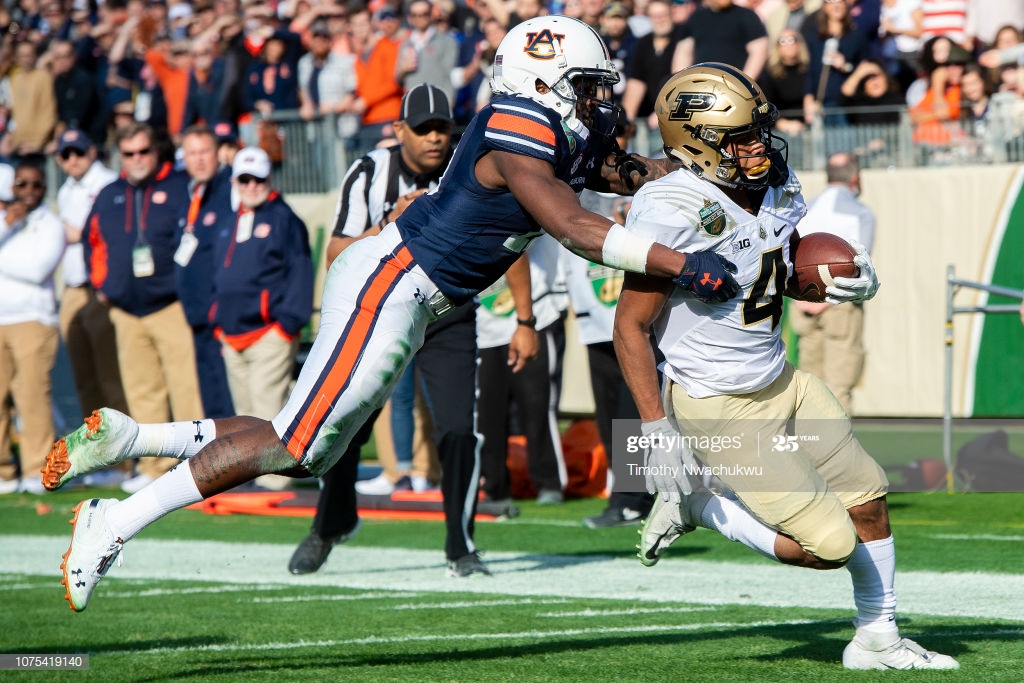 Javaris Davis is and an undersized defensive back from the SEC with good ball production over his career.  He had 2 interceptions and at least 6 passes defense in each of his 4 years.  He’s a good communicator pre snap and has experience playing on both sides of the field outside and in the slot.

Against the pass, he has experience playing in Press, Off Man and Zone.  When playing press he displays good feet to mirror with quick hips to open up and can be physical in the early portion of the route . He played a lot of Trail Man and was comfortable in that position to undercut routes with help over the top.  In Off Man he shows a smooth pedal, good timing and quickness in his lateral breaks with a solid change of direction to click and close on throws in front of him. In Zone, he has very good awareness of his area and tracks nearby routes well and shows good acceleration to close on the ball. Against screens he plays with good aggressiveness to get to the ball and he shows good ability to smoothly follow WR’s in the scramble drill. Very good speed to run with WR’s or accelerate to close when playing catch up. Didn’t see him blitz from the slot often but he can dip under bigger blockers on the edge.

Vs Purdue, he’ll blitz from the slot at the top and will duck under the left tackle to get the sack.

Vs Oregon, he’s outside at the bottom of the screen and will drop into Zone and show is COD to stop, accelerate and make the tackle.

At Texas A&M, he’s in the slot to the right and will read and mirror the WR on a shallow in breaking route and gets in the pocket of the WR and breaks up the pass.

At Texas A&M, he’ll be in trail Man Coverage from the right slot and is in great position to nearly knock it out of his hands.

Against the run, he shows good competitiveness to take on blockers to set on the edge and force runners inside.  He was willing to fill in the C and D gaps and is a good tackler heads up against a runner going low to take down bigger players.

At LSU, like most defenders he’ll take advantage of hitting the QB when he can. Here is a scramble by the QB and Davis lays a good hit on him at the sideline.

Vs Alabama, he’s in the slot at the top and will read the reverse, avoid the block and is able to fling the WR out of bones.

I didn’t see him use a jam often playing in Press playing more reliant on his skills to match the WR.  When transitioning in off Man his turn can get a little off kilter when opening to run forcing him to play catch up. Length is going to be an issue with bigger WR’s able to box him out or out jump him. Facing blockers he can hold his position but need to improve his ability to shed to get more opportunities to make tackles. When tackling on the outside he tackles too high going for the grab and fling method. Against, the run I felt there were more opportunities to get in on tackles that he avoided.

At LSU, the mental processing here is good to read the screen and get into position but he goes in high for the tackle and is shoved aside

Davis is built like Mike Hilton with better coverage skills but not as effective against the run. He has the speed, ball skills, route awareness and a tenacity to be an asset for defense. He’ll need to improve getting off blocks, consistently tackling lower and work on his transition when opening up his hips on deeper routes.

He projects as a slot corner who can play in Zone or Man coverage schemes and can match speed with just about anyone and will have a role covering punts and kicks on special teams.