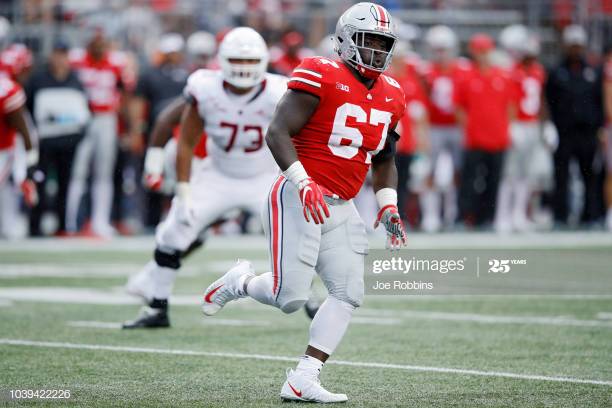 -Good first step with impressive explosion in short areas
-Relentless motor; plays with obvious chip on his shoulder being undersized
-Shows good push/pull ability with a quick swim move
-Natural leverage to his game with a sound, solid base
-Easy, explosive mover for a man of his size

-Severely undersized for the position with short arms
-Can be overpowered at the point of attack
-Struggles to redirect once momentum is moving forward
-Slow to shock an shed; labors to get off blocks against the run
-Small tackle radius; lots of missed tackles/sacks on tape
-Can be swallowed up by lengthy linemen in the trenches
-Slow and methodical converting speed to power

Buried on the depth chart over the years at Ohio State, Robert Landers is flying under the radar as a twitched-up interior defensive lineman, albeit one that is undersized.

Landers has some pretty impressive explosion on tape, but it’s hard to overlook the lack of length and size overall. That said, he makes it work when on the field.

I really liked what I saw from a pass-rushing standpoint from Landers during study of his film.

He doesn’t have much length inside, but he has serious strength. Watch the push/pull and swim to beat the Michigan right guard for the sack in 2018.

He has a lightning quick swim move that allows him to win often when utilizing it, but he really struggles to finish once he gets to the quarterback.

That lack of production from a tackles standpoint is glaring due to the amount of missed tackles littered throughout his tape.

I love Landers’ first step and his initial power to win in the trenches. He has a relentless motor overall too. He gets knocked to the ground here, but look at him continue to fight and make the play in the backfield for the TFL.

You just have to love guys with motors and mentalities like that.

The swim move isn’t just for pass rush reps. Landers’ swim is so good that he busts it out defending the run too.

This is a fun rep by Landers. He does a great job swimming quickly and sliding in behind the Michigan State lineman to pair with teammate Malik Harrison for the TFL.

The real problem overall though with Landers’ tape is his struggles to finish.

I love the effort to squeeze through the double team against Clemson in the CFB Playoffs. The burst coming out of the double team is really impressive too. It all goes to waste though as he overruns Trevor Lawrence and fails to record the sack himself.

Overall, Landers is ticketed for a rotational 4-3 role. I had mocked him to the Steelers previously on twitter a few times, but he just isn’t a fit for nose like I thought he could be. The power is definitely there and the ability to anchor is as well, but a 4-3 role, playing a gap-penetrator is how he’ll succeed in the NFL.