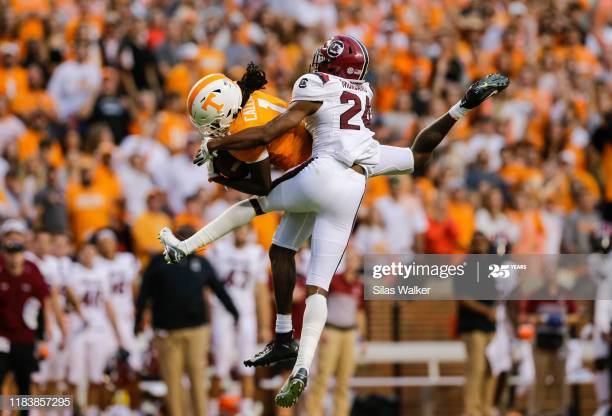 – Big frame with good length (32 3/8 inches) and hand size (9 3/8 inches)
– Routinely wins jump balls, high leaper with good timing and ability to win in contested situations downfield
– Good hands and tracking of the football, finds and adjusts to the ball downfield
– Physical player, plays and runs with an edge, fearless mentality and willing to go over the middle of the field
– Can break tackles against smaller corners with some YAC ability
– Willing blocker with frame to support it, size lets him crack safeties in the box
– Playmaker in college with legitimate vertical ability
– Punt return value with lots of production
– Lots of starting experience
– Sub-par QB play didn’t help his cause

– Despite size, struggles versus press coverage and too often stalled at the line
– Needs to use hands better to knock CBs hands down and get into his route
– Build-up speed runner with average timed speed (4.55 40)
– Fails to create separation, not a technical or nuanced route runner who wins mainly in contested situations
– Deep threat player, largely feast/famine production, and went quiet for long stretches of time, wasn’t focal point of offense as a senior (third in receptions)

Tennessee has a sneaky number of prospects worth paying attention to this season. Two of them are wide receivers. Most talk about Jauan Jennings but his 1B was Callaway, the vertical threat to Jennings’ big-slot ability. Callaway’s specialty is winning downfield, jump balls with great tracking and high-point ability. You see his 38 inch vertical on tape.

He’s a tough player willing to go across the middle and in that sense, has a tiny bit of a Hines Ward/JuJu Smith-Schuster quality. Bigger dude who seeks out contact and plays with an edge. First clip is him going over the middle. Second is him taking on the Georgia DB instead of ducking out of bounds.

As the X receiver in their offense, he saw more press than other receivers and it’s an issue for him. He struggles with his releases and working off the line cleanly, getting stalled out at the LOS and throwing off the timing of the route. Couple examples.

Overall, he’s not the most refined prospect but enough athletic tools and I like the attitude he plays with. Reminds me a bit of James Washington for his downfield ability despite having average speed.