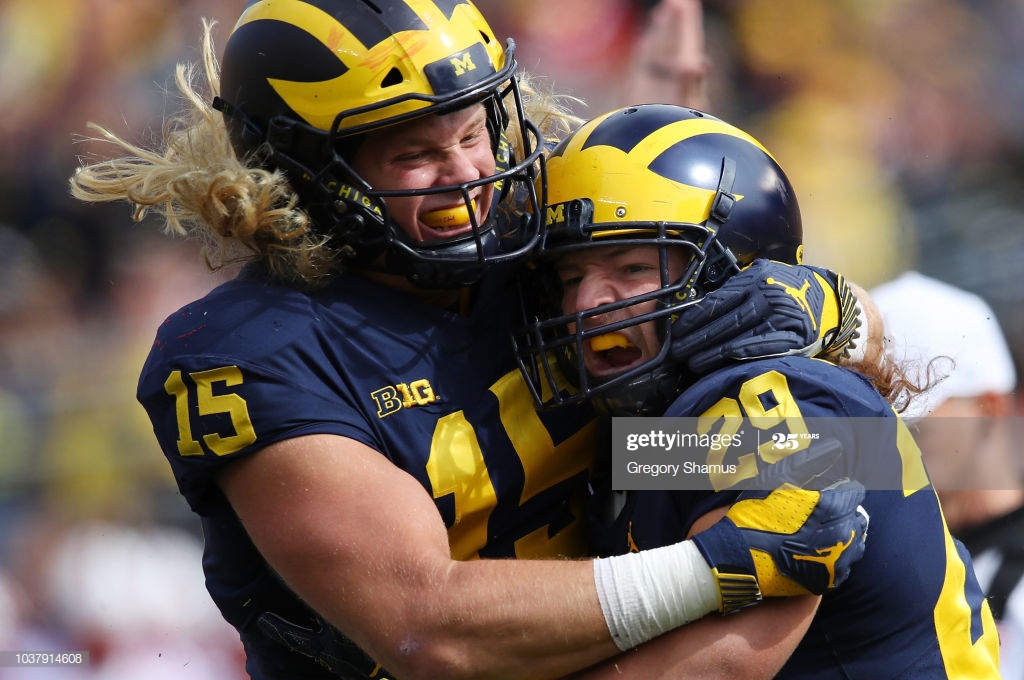 -Standout special teams player
-Plays with his hair on fire every snap; relentless motor with no regard for his body
-Sound, consistent tackler that rarely misses
-Will never be outworked as a former walk-on; developed into team leader final two years
-Quick processor that makes up for his lack of athleticism with film study and recognition skills
-Comfortable carrying tight ends and slot receivers in coverage; decent ball skills
-Effective blitzer with good closing speed and finishing abilities

-Undersized off-ball linebacker with below-average athleticism and range
-Lateral mobility is nearly unplayable against speed teams, causing him to lose a number of races to the corner
-Needs to stay clean and flow with ease to make plays; struggles to stay clean once linemen reach him
-Likely to be a special-teams-only prospect
-Limited starter experience over four years at Michigan

-Younger brother of NFL offensive lineman Graham Glasgow (Broncos) and defensive lineman Ryan Glasgow (Bengals)
-Former walk-on turned Butkus Award semifinalist
-Ranked as the top tackler in the country by PFF with a grade of 90.4
-Appeared in 52 career games at Michigan with two starts at the VIPER position and 13 starts at WILL linebacker
-Four-time letterman at Michigan
-Four-time Academic All-Big Ten honoree
-Started all 13 games at linebacker as a senior, finishing with 89 tackles including seven for loss with five sacks, two pass breakups, one fumble, and one blocked kick
-Finished career at Michigan with 140 total tackles, 10.0 TFL, 7.0 sacks, three pass breakups, one forced fumble, one fumble recovery and one blocked kick

This late in the draft process, I’m making it a mission to seek out the sleeper cells that could be potential Steelers.

Digging around Michigan’s program, I stumbled on special teams ace Jordan Glasgow, who has NFL bloodlines, was ranked the best tackler in the country by PFF in 2019, and has a knack for making terrific special teams plays, altering games.

All that said, there’s just not a ton of tape on the fifth-year senior, largely due to his limited starting experience at Michigan in Don Brown’s defense.

However, I was able to dig up some terrific special teams plays from the Butkus Award semi-finalist., as well as one sack.

In 2019, Glasgow took on a larger role as a starter under Brown, while also carrying the torch as the tone setter on special teams. Against Illinois, Glasgow had an awesome game, recording a career-high 11 tackles.

All that said, this blocked punt was his best play of the game.

He reads the Australian rules punt and alters his line for the block, cutting outside of the protector to lay out and block the punt, setting Michigan up deep in Illinois territory

In 2016, Glasgow made arguably the play of the game for the Wolverines midway through the third quarter. Yes, Michigan went on to lose the game to Ohio State, but Glasgow made himself a name right away to Maize and Blue faithful, shedding Cincinnati Bengal Sam Hubbard’s block on the fake punt, stymying the fake deep in Ohio State territory.

As a defender under Brown, Glasgow was pretty decent in coverage, and really closed in on some sacks thanks to his short-area agility.

I apologize for digging up Spring Game tape, but Glasgow’s defense tape was very limited.

Here, you can see how comfortable he is carrying slot receivers across the formation. He reads the quarterbacks eyes and jumps the route to take the pick-6 to the house.

Against Middle Tennessee State, Glasgow showed his prowess blitzing under Brown, getting to the quarterback for the huge sack, getting Michigan’s defense off the field.

Take a look at the technique in the tackle too. He’s so sound and rarely misses.

Overall, Glasgow reminds me a ton of Larry Izzo, former Dolphins and Patriots special teams standout in the early 2000s. He’s so smart, plays with a red-hot motor, and takes serious pride in his role on special teams.

He’s just the type of player you want rounding out the bottom of your roster, and could help flip a game or two with plays on special teams. Plus, he’s well versed on how to be a pro thanks to his two older brothers.