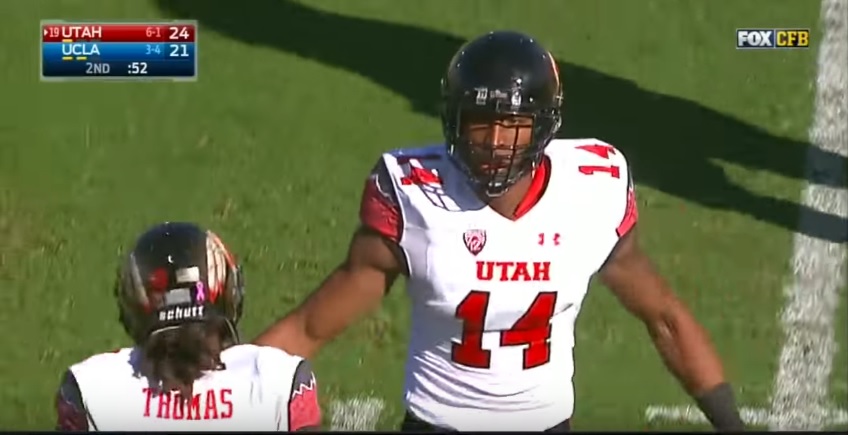 -Married, father of one
-Contributed on special teams, receiver, safety and cornerback during Utah career
-Played in 42 career games for Utes (32 at cornerback) with 12 starts
-Finished with 62 career tackles, 4.5 tackles for loss, 14 pass breakups, five interceptions and one forced fumble
-Made switch to cornerback full time after sophomore season

Throughout the draft process, there are few guys that you simply won’t hear of unless turned on to by outside parties.

That’s exactly what happened here with Utah’s Brian Allen, whom Dave-Te Thomas raved about on a recent Terrible Podcast here for Steelers Depot.

A former receiver with impressive length and long speed, Allen is as raw as it gets at cornerback. But he’s shown significant improvement over the last two seasons as a cornerback, finishing fifth in the Pac-12 with four interceptions in 2016.

With his length and long speed, Allen is comfortable playing in press or off-man, where he’s able to stun receivers, who keep with them down the field.

On go routes, Allen is really impressive, using his height and length to blanket receivers down the field, daring quarterbacks to test him on shots.

Against Cal’s Davis Webb, Allen had his bright spots and struggles, but here on the 9 route, Allen plays the trail technique to perfection, sitting under the route by a few yards to bait Webb into thinking he had a window to throw in.

Once Webb releases the ball, it’s an easy pick for the former receiver, who wins the jump ball at its highest point.

Although very raw, Allen has a good sense of what’s happening in front of him, showing some impressive closing speed to get to the ball.

While his technique isn’t great here on the tackle, I like his physicality in this situation, laying the wood to the receiver.

He’s definitely a moldable corner that could turn into something special with his size and arm length.

However, there are times where he looks so uncoordinated when trying to get into a receiver.

His feet get too close together here on the press, allowing the BYU receiver to swat him aside. Fortunately for Allen and Utah, this play was going the other way, so his error didn’t come back to haunt him.

Overall, he’s as raw as it gets as a corner, but Utah has had a knack for developing long-limbed corners into productive NFL corners in Oakland’s Sean Smith and New England’s Eric Rowe.

Allen could join that group with the right system and coaching at the next level.