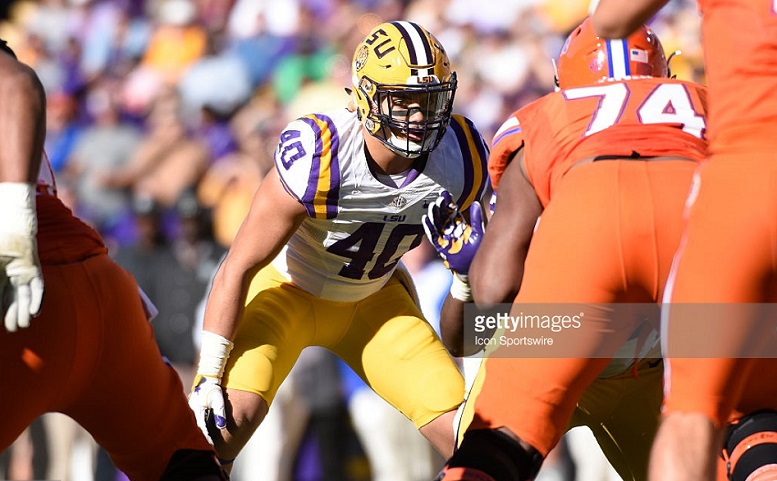 – 2016: 93 tackles, 9 TFL, 1.5 sacks, 1 INT
– Became a starter in senior year after spending his first three years as a reserve- special teams player
– Voted 2016 LSU MVP by teammates
– Invited to the 2017 Senior Bowl
– Instrumental part in LSU defense that allowed only 16 touchdowns all season, an FBS best

LSU’s Duke Riley only knows how to play football one way – fast. A tad undersized at 6’1 and 230 lbs, Riley more than makes up for his lack of size with his gifted speed and instinct, traits that Riley would put on full display at this year’s NFL Combine. After an imposing performance in which Riley posted a 4.58 40-yard dash time, the fastest out of any linebacker, the LSU inside linebacker has taken gigantic strides in increasing his draft stock.

Riley has the speed capable of being a sideline to sideline player and shows evidence of being able to beat running backs to the perimeter.

Starting from the top, Riley keeps his eyes on the running back in the backfield throughout the process and as soon as the Ole Miss back bounces off tackle, Riley is all over it. Quickly disengaging from his blocker, Riley chases down the back before more damage is done. An all around impressive play that many teams love to see out of an inside linebacking prospect.

Riley’s speed also comes in handy when it comes to the linebacker’s ability to trust his instincts and shoot the gap. Riley possesses the speed and football intelligence to correctly read a play, a major factor behind his 93 total tackles last season, 8th in the SEC.  Watch below how Riley reads the backfield and cuts the play off before it has a chance to develop.

Alabama’s Bo Scarbrough takes the handoff and ponders about bouncing outside before cutting back inside. The next sequence on the above play is not Scarbrough running downfield but the Alabama running back being carried backwards towards the line of scrimmage. The LSU player behind the stop is none other than Riley.

In case you demanded more, here is Riley’s instincts on display during LSU’s matchup against Auburn. Once again, Riley keeps his eyes in the backfield and fights off an offensive lineman and Auburn fullback to make the stop short of the sticks.

Riley’s instincts and football intelligence can also be extracted when the LSU linebacker is asked to drop back into coverage.  Watch below as Riley drops back into coverage, keeping his eye on Ole Miss’ Chad Kelly and drifts in the direction of the play.

After a horrible throw and decision from Kelly, Riley notches his first and only interception of his college career. Throughout Riley’s tape, a general pattern of the linebacker showing adequate zone depth perception and the ability to hang with crossing patterns over the middle.

And when Riley is not being asked to drop back into coverage, the linebacker brings brute force and closing speed in rushing the quarterback. Here he is de-cleating a Mississippi State offensive lineman.

Though Riley does not obtain a sack on the play, the brute force displayed by the 2016 LSU MVP was even more impressive. Riley may not have the strength or size to control blockers but he stills packs a very powerful punch.

Overall, the only aspect that limits Riley is his size and lack of raw strength, though I believe Riley has the qualities to work through his shortcomings. At the next level, Riley currently projects similarly as former Steelers linebacker Sean Spence but his ceiling could be Tampa Bay’s LaVonte David. Like Riley, David is projected as too small and undersized at the next level but proved those allegations to be foolish.

Riley seems better suited for a 4-3 WILB role, where his sideline to sideline speed could be better used. Look for Riley to be selected just before the mid-way mark of day three.

Games Watched: vs Alabama, vs Ole Miss, vs Mississippi State, vs Auburn, vs Louisville