– NFL frame who appears to have good length
– Quick off the ball, can win with first step and stresses OTs with ability to win the edge
– Flexibility to flatten and bend the corner, hard to push up the arc
– Quick, heavy hands who produces a strong initial punch
– Wins in multiple ways (speed, dip/rip, long arm)
– Smart pass rusher who has a plan and is able to read the set of the OT, works off it, ability to counter
– Capable force player against the run who shows overall good technique and ability to hold his gap
– Strong at the POA and uses length to create space, plays with proper leverage and hand placement
– Played on both sides of the ball and time in two and three point stance, looked just as good with hand up as in the dirt

– Checkered medical history that limited his starting experience (20 games)
– Little experience dropping into coverage, has to learn how to play going backwards
– Situational issues against the run, vulnerable to crashing down on trap blocks when TE blocks down, loses contain
– Needs to stay square vs run, will try to spin away and lose vision on the football

In an EDGE class full of talent, Carl Lawson is at the top of the class for me. He has everything; size, speed, power, and overall technique. The physical tools are there. A quick first step and heavy hands make for a successful pass rusher.

As the LOLB below, he wins with his first step and rip-move against the Clemson right tackle. Forces Deshaun Watson to climb the pocket and throw the ball before he wants to, putting it ahead of the tight end on the flag route and falling incomplete.

You again see his ability to corner and bend the edge. Beats the right tackle off the ball, turns his shoulder upfield, and nearly comes away with the sack.

His hand use and extension is advanced, especially for an underclassmen who really doesn’t have that much football under his belt. Gets his arms extended to create space against the tight end, reads where the running back is going, sheds, and makes the tackle at the line. Lawson is already an above average player against the run. Not a one-trick pony. And that’s attractive.

Technique is something he shows as a force defender here. Watch him keep his outside half unblocked as the contain player to turn the back inside to his help. Really well done. 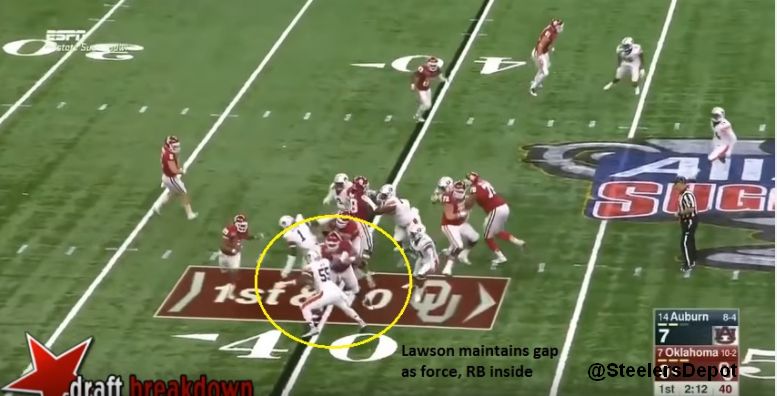 He shows his IQ as a pass rusher, too. Working against the left tackle, he’s initially pushed upfield, his speed rush failing. Instead of staying course and likely getting run upfield beyond the junction point, he stops, counters with a spin, and gives himself an opportunity to win. At worst, he’s able to keep contain and not let the QB escape. Rush lane integrity is critical to generating pressure – can’t have a bunch of freelancers out there. 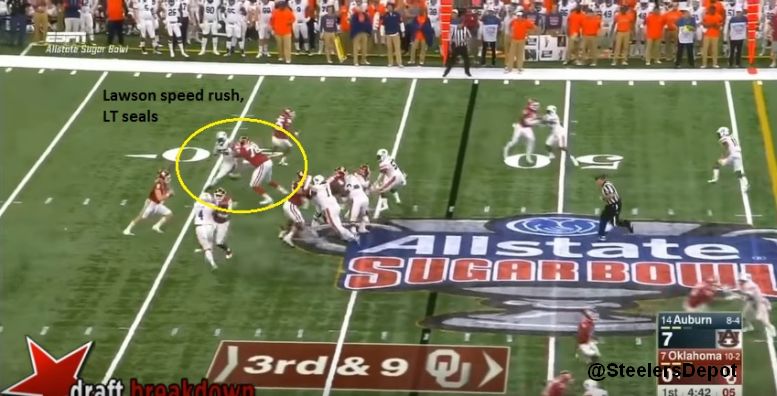 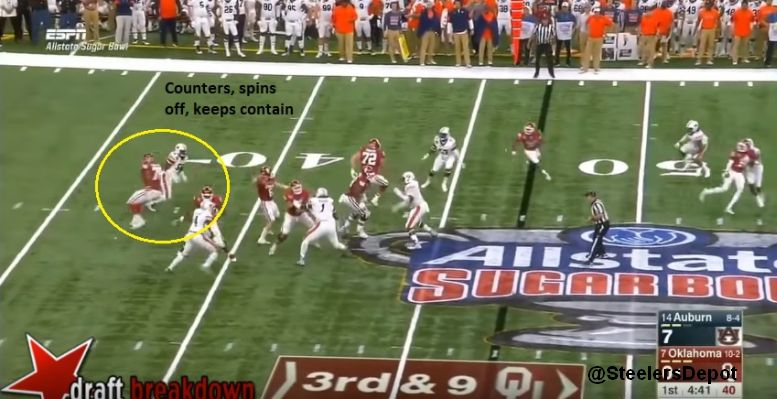 Now to some of the problems. Lawson struggles with some details against the run. Too often, he chases downhill on gap schemes where the tight end is blocking down, giving up the edge and running into the pulling guard. I don’t think he’s using a wrong-arm technique, intentionally attacking the inside half of the puller, either. Here’s a good example.

Or here, where he tries to spin around to get off the block of the right tackle, losing vision on the back, and being unable to close the gap as the runner speeds through. 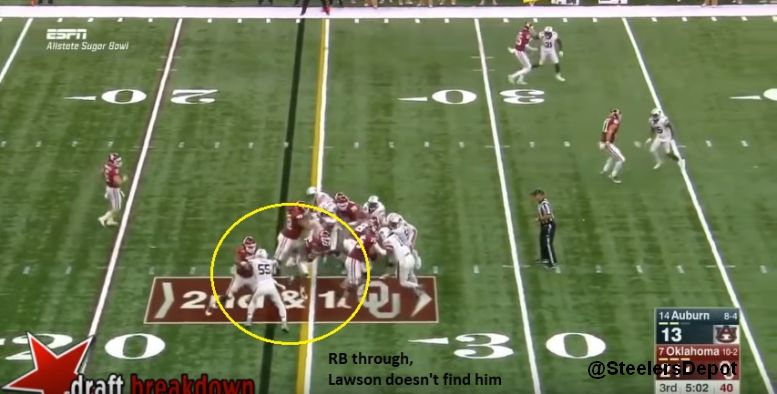 The biggest elephant in the room, the one listed above, is his medical concerns. A torn ACL and a bum hip in back-to-back years washed out back-to-back seasons. That’ll make the Combine medical checks very important for him. You may see some stories come out negative against him; I’m just speculating, to be clear, but be it the truth or someone trying to put out bad info to scare off teams (it happens), keep an eye out for that.

Still, Lawson is one of the most talented and refined pass rushers I’ve seen. Of course, for Pittsburgh, he seems like the perfect fit. A big, long, athletic, SEC pass rushing outside linebacker. It’s a bed they’ve gotten in – or thought they had gotten in (looking at you, Jarvis Jones).

He’s my favorite for the 30th overall pick in the draft.

Games Watched: vs Clemson, at Alabama, vs Oklahoma, vs Texas A&M