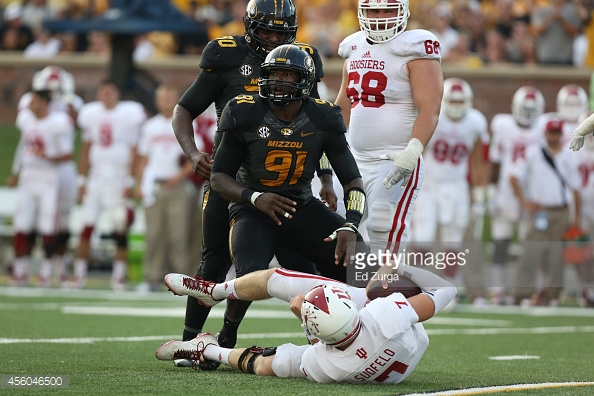 -Explosive first step off the line
-Able to dip/bend around & underneath blocks while maintaining speed off edge
-Sets edge well against run due to penetration upfield
-Pro-ready spin move
-Able to play with hand in the dirt or standing up
-Comfortable rushing from either side of the line
-Great feel for how to set up blockers for pass rush moves
-Motor that runs hot, allowing him to chase down plays from backside
-Ideal frame and arm length for pass rusher
-Three years of experience as No. 1 pass rusher in SEC

-Struggles to wrap up in the open field
-Hesitant and flat-footed when defending read-option
-Has a hard time getting off of blocks against the run
-Limited leg power to hold up against the run in stalemate
-Will need to add a second pass rush move at next level
-Tends to pick sides against the run, opening up running lanes for offense
-Doesn’t seem to always have a plan when rushing the passer; freelances a lot

-Played in 35 career games at Missouri
-Racked up 18 career sacks and 34.5 tackles for loss in three seasons to go along with five forced fumbles
-Played just one year of high school football before making his way to Missouri
-Focus was basketball in high school before trying football for senior season
-Named All-SEC Second Team in 2015 and All-SEC First Team in 2016
-Ranks seventh in program history in sacks and 11th in tackles for loss for career
-Never missed a game in Mizzou career

I’m starting to notice a trend over the last five years or so with Missouri football:  it’s become a serious factory for some of the top pass rushers in each draft class, starting with Sheldon Richardson in 2013 and continuing on with Markus Golden and Shane Ray in 2015 before now culminating with Charles Harris this season.

Every guy that has been a big name coming out of Missouri as a pass rusher has flourished in the NFL, and Harris will continue to roll on as another product of Pass Rusher U.

At 6’3’, 255 pounds, Harris is an absolute freak off the edge. Nearly unblockable the last two seasons as a starter for the Tigers, it’s about time we start recognizing Harris as a bonafide stud in this loaded edge class.

When it’s all said and done with Combine results and Pro Day numbers, Harris should be considered the No. 1 or No. 2 EDGE guy right up there with Myles Garrett and Tim Williams.

What makes Harris so tough to block is not only his terrific explosion off the ball at the snap; it’s his athleticism that really gives offensive tackles fits.

As a former basketball player, Harris honed his spin move in the post in high school, and over the last two years he’s been able to perfect the technique, setting up tackles for failure so often.

When he’s able to time it just right, it’s a thing of beauty.

At the snap Harris is able to get upfield quickly, forcing the tackle to get his drop as far back as he possibly can. By getting upfield as fast as he does, Harris is able to force the Florida left tackle to overextend his base, allowing Harris to hit him with the spin move.

Once the spin move is complete, Harris has a clean shot at Will Greier in the pocket.

Earlier in the 2015 season, Harris put together one of the most dominant edge performances I’ve seen in my five years of doing this. On the road against the Kentucky Wildcats, Harris simply took over on every single snap.

For some odd reason, Kentucky rarely (if ever) gave its left tackle any help against Harris, but when it did, well…just look for yourself.

He’s so aware of where the quarterback is in the pocket that he’s able to use his feel as a pass rusher to get into good position with one move before then finding the quarterback for the sack.

Against the Wildcats, Harris only finished with six tackles and 1.5 tackles for loss, but he was just simply incredible on every single snap, getting pressure and penetration into the backfield more often than not.

While Harris is renowned for his pass rushing prowess, he can really blow up some plays as a run defender, and he’s also got a great motor to track down ball carriers across the field from the backside.

On top of that, he struggles to get off block quickly to try and make plays near the line of scrimmage, but even when he does he has a hard time making the stop himself.

Harris does a great job of crossing the lineman’s face to blow up the trap, but once he gets a chance to bring down the ball carrier to complete the play he fails to wrap up and lets the UConn running back get to the line of scrimmage.

Despite playing football for just four years (five years if you want to count his redshirt season when he didn’t see the field), Harris is a guy that is going to be a serious problem at the next level.

When I watch his tape I can’t help but be reminded of former Tennessee and Philadelphia great Jevon Kearse, who had a similar build and burst to Harris coming out of Florida.

Right now I think Harris would be an ideal fit for the Pittsburgh Steelers off the edge, but with what he’s shown on tape and how I’m expecting him to test, I’m hard-pressed to see how Harris is still around at No. 30 overall.