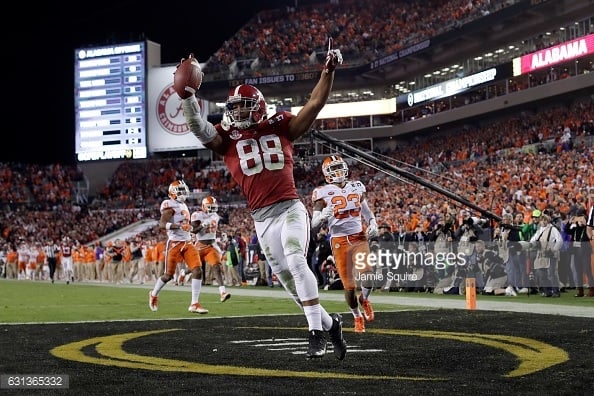 – NFL size and length
– Reliable hands, ability to catch away from his frame
– Shows burst at the top of his route and ability to separate
– Physical run blocker, plays with nasty demeanor, drives his lower half and finishes his blocks
– Blocks well in space
– Played in pro style offense and asked to do a lot of grunt work he’ll be expected to do in the NFL
– Lot of experience as an in-line blocker, will ease the transition
– Productive in big game moments

– Slow off the ball as an in-line blocker, causes him to lose leverage and ground
– Productivity wasn’t ideal, partly because of run-centric offense he played in
– Long speed is questionable

Much like he was coming out of high school, Howard is the top tight end in this year’s class, which is a pretty strong group overall. Howard has everything you look for – receiving ability, blocking ability, and versatility.

If you want to be a tight end in the NFL, especially in Pittsburgh, you better be able to block. Howard excels at it and to me, more importantly, embraces the thought. Physical, nasty demeanor that coaches will adore.

It isn’t just tenacity either, it’s technique too. Watch him set his hips and create the run lane for the back. 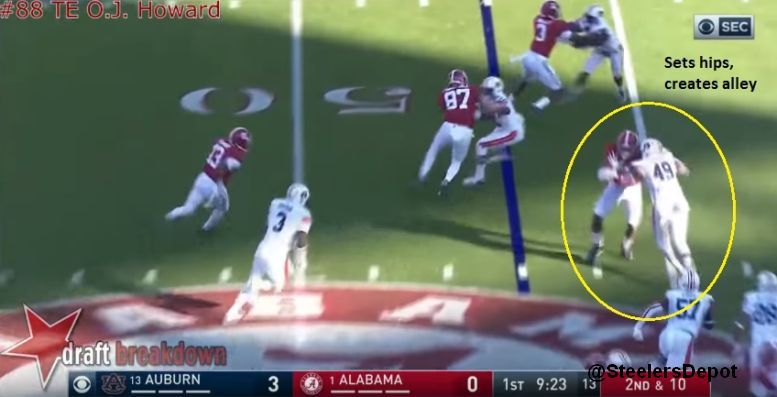 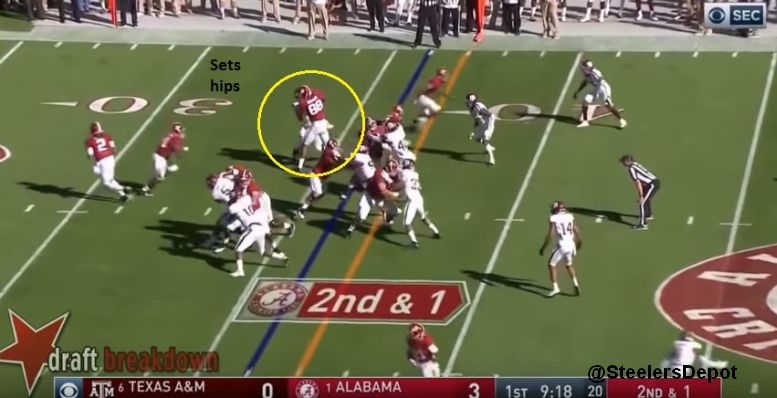 He was underutilized as a receiver but that didn’t mean he was ineffective. And he showed up in big moments, including both National Championship games. Killed Clemson in both with over 100 yards and a score in each.

Howard benefited from playing in Alabama’s offense. As close to a pro-style attack you’ll find, he was used on a ton of common run schemes he’ll get in the NFL. Base blocking the end, split zone and kicking out the EMOL, all the stuff so many of these college tight ends and offenses aren’t asked to do. That’s going to give him a leg up on his NFL transition.

Now, his run blocking isn’t perfect. He is later out of his three point stance than a two point which causes him to struggle in his base blocks. Watch him in the clip below.

Something that can be corrected but working on his stance, maybe there’s something minor technically going on that’s hindering him, would be one of the first things I look for.

Tight end has become a need for the Steelers with their inability to trust Ladarius Green’s future with the club. It’s still dicey because Green could come back and be totally healthy for his career (unlikely, but possible, and I expect him to be on next year’s roster). That means a first round investment isn’t ideal. Which is fine, because Howard isn’t going to last until pick 30 anyway. He is undoubtedly the first tight end off the board and shouldn’t fall out of the top 20. Keep an eye on Tampa Bay at pick 19.