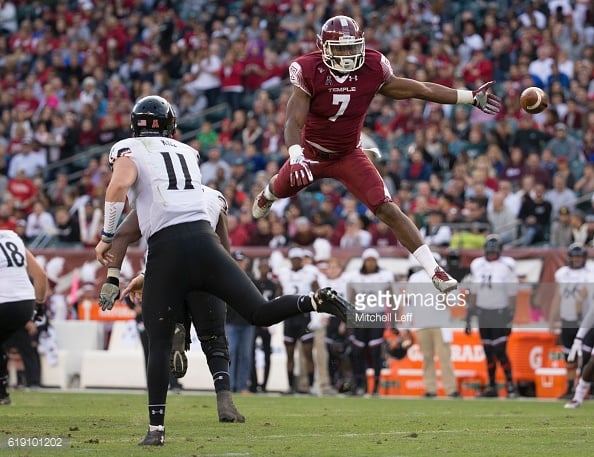 – Great first step and best way to win as a pass rusher
– Ability to flatten the edge, hip/ankle flexibility to corner and get upfield
– Sideline to sideline range against the run, hard to outrun
– Skilled in coverage, fluid in drops, ability to spot drop or stay in-phase in man coverage
– Versatile, wore a lot of hats, capable of playing strong/weak, two or three point stance, and experience off ball during Senior Bowl
– Gives chase to the ball, doesn’t loaf, even if play is away from him
– Technically sound against the run, fits are good, makes up for lack of size/length
– Appears to have high football IQ who can handle high amount of information with ease

– Undersized, lacks length (32 1/8 inch arms), and won’t overwhelm with power
– Predictably isn’t great at converting speed to power and will predominantly win around the edge
– Viewed by some as a tweener without true position, may have to move off ball, creates more projection
– Lacks go-to counter move off speed rush

– Two year starter for Owls
– 2016: 22.5 TFL, 9 sacks, 3 FF
– First-Team All-AAC selection
– Career: 46 TFL, 18 sacks
– Had no offers out of high school due to injury, went to Temple as preferred walk-on before earning scholarship
– Began college career as cornerback before moving to DE/OLB

Reddick was a guy I liked watching him prior to the Senior Bowl but after Mobile, he became one of the unquestioned stars. Talk to anyone who was down there for the week of practice and they’ll tell you he was one of the top five players – period – there. And the best edge rusher.

What was impressive about that week was the move to play off ball linebacker, something he had never done before, while getting reps on the edge. The move felt seamless for him and he was arguably the best inside guy there. He’s got incredible range because he’s a top athlete in his first step and long speed. But there’s another component to, his football IQ and ability to diagnose and read his keys. To make the move inside and excel there is a testament to that.

But I like to focus on him as an EDGE rusher. That’s what he did at Temple, that’s where he excelled, and if you’re going to draft him, it should be as a pass rusher first. That’s where Reddick succeeds.

Watch him win with his first step, corner the edge, and finish with a sack against Memphis, a game where he took over at the end.

And again, in a stillshot, you can see his get off. 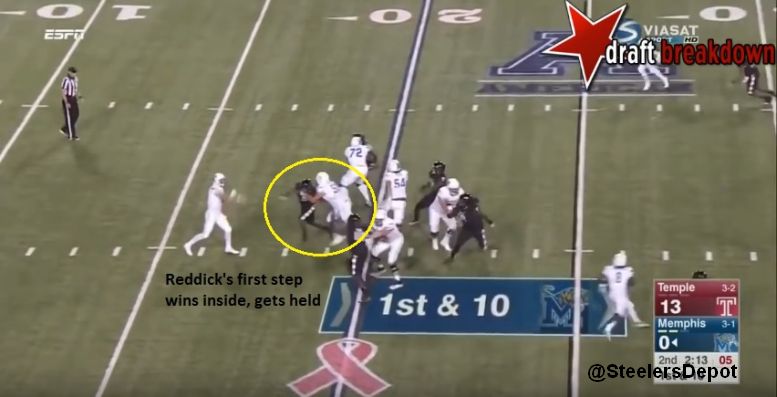 The obvious concerns with a guy like Reddick, just looking at him, is his ability to hold up against the run. A more svelte frame but his play here isn’t as bad as you might think. His technique makes up for it. In this example, he keeps his outside arm free and funnels this run back inside. 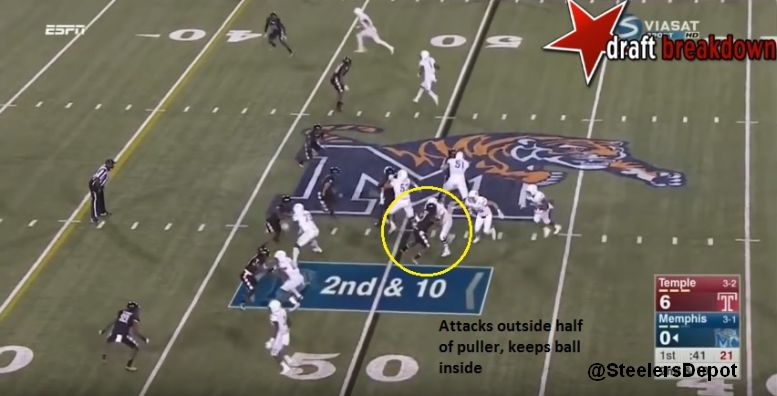 Now, that doesn’t mean he can’t get pushed around. He does. Like you see here.

But some perspective is key. He’s about the same size as Jarvis Jones, who weighed in at 6’2 242 with only half-inch longer arms. And Jones best trait in Pittsburgh was his run defense. So being smaller doesn’t mean he’s going to suck against the run.

And if you’re wondering, that’s where the Jones/Reddick comparions stop. Reddick will blow him out of the water when he tests at the Combine. He told me at Mobile he wants to run in the 4.3’s but I expect him to be in the high 4.4’s. Still, that’s ridiculous number and you could very well see some Von Miller type numbers (4.53 40, 37 vert, 10’6” broad, 4.06 three cone).

The more reasonable NFL comparison, looking at his whole profile, is a Shane Ray to Dee Ford type. Generally thought of as undersized but win with their quickness and flexibility. And Reddick can be that guy – he can be a double-digit sack player in this league.

For Pittsburgh, in the short-term, he could be a fun chess piece. I mentioned not knowing a name for the hybrid safety/linebacker type. Reddick could be that guy, even though we normally think of a safety occupying that spot. He’s an easy mover and he’s going to test like a big safety.

Could replace Lawrence Timmons, if he’s retained, on obvious passing situations. Can’t say it would work for sure but it’s an interesting thought since the OLB spot could be occupied by Bud Dupree and James Harrison much of the time.  Similar to Jatavis Brown, who the Steelers had interest in last year.

Bottom line is Reddick has versatility, elite athleticism, a clear-cut way to get to the quarterback, and the production the team looks for. He could be in play for pick #30, though I admit I think I like Carl Lawson over him.