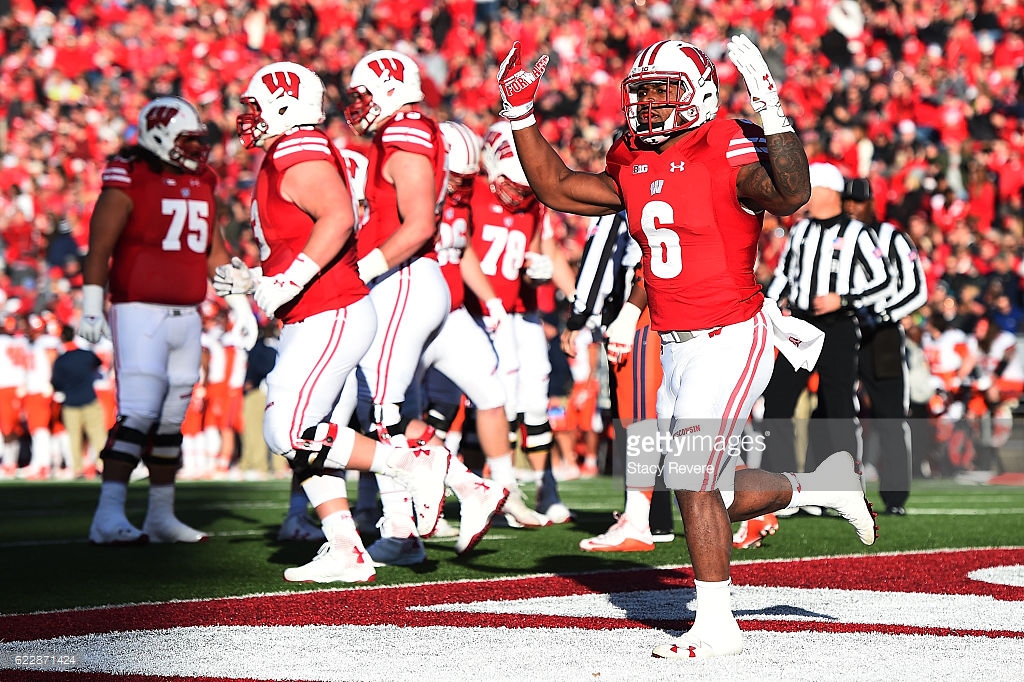 – NFL size with big hands (9 7/8 inches)
– Well-rounded runner who does everything at least average
– Vertical runner who is rarely stuffed, makes a profit on nearly every carry
– Great feet and lateral agility, able to jump in and out of the hole, feet works with eyes to press LBs and create space
– Keeps legs driving through contact and pushes pile forward, even if he isn’t an overwhelmingly powerful runner
– Willing to square up in pass protection, size to take on linebackers
– Played in pro style offense, reads, schemes, and steps likely similar to what NFL will ask of him

– Lacks defining trait, doesn’t have top end speed or upper echelon power
– Pad level is a bit too high, may contribute to lack of power
– Was not asked to do much out of the backfield
– Benefitted from power/traditional system with true FB and road-grading OL
– Man/gap blocking scheme, wasn’t asked to make a lot of zone reads
– Injury history over last two seasons
– Some off field red flags

– Career: 576 carries, 3094 yards (5.4 YPC) 36 TDs
– 2016: 314 carries, 1375 yards 15 TDs
– 29 career receptions, never more than 14 in a season
– Averaged 6.5 YPC his sophomore season while backing up Melvin Gordon
– Limited to four games junior season due to sports hernia surgery
– Had off campus dispute with security guard in 2015, suffered a cut to his own hand
– Initially lied to school about incident, was caught, and suspended for one game by the team
– Missed one game in 2016 with ankle injury
– Four star recruit out of high school, rushed for over 2300 yards in each of junior and senior seasons

In a draft class teeming with talent, Clement is flying below the radar. There are some legitimate reasons for that, we’ll get to it soon, but there’s a whole lot of talent here, too. You just might have to look a little tougher to find it than the others.

I, like many others, care more than maybe anything else about a running back, is his ability to create. Get beyond what is blocked, something any runner worth a contract of the lowest level can do reasonably well. That’s what I saw from Clement and as noted in his report, stuck out the most against LSU. The Tigers nearly had a top ten run defense this year and against them, Clement wasn’t stuffed (zero or negative yards) a single time. That says a lot.

And there were times that could’ve happened. This is a perfect example. The SAM linebacker ducks under the block of the tight end, gets downhill to the line of scrimmage, and in position to nail Clement at the line. But he’s able to jump laterally to his left, plant, get upfield, and turn it into a three yard gain and a first down.

His vision is good, even when playing in gap scheme concepts that don’t have the necessary reads a zone scheme would have. You see it here on this gap run, showing patience behind his pulling guard, and then cutting the run back and upfield.

And here against LSU, probably a little less impressively. Run supposed to go left but the linebackers and defensive line crashes, letting Clement jump cut to the right and get into the end zone. 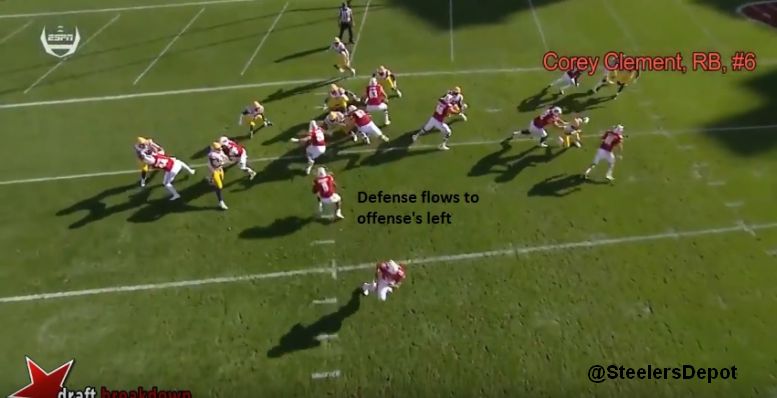 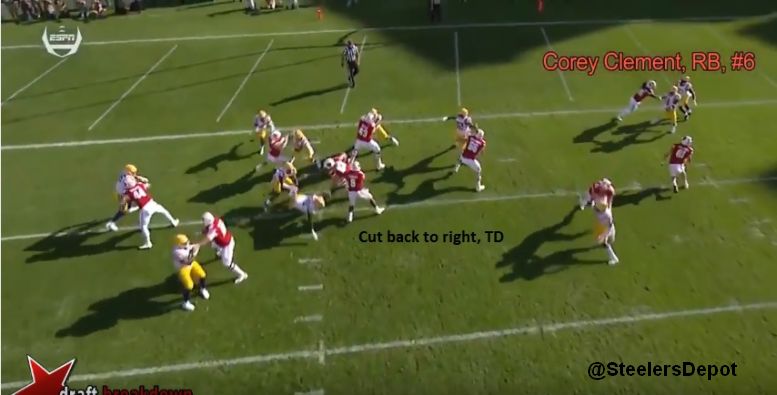 His hands are largely untested and though I think he’s a good route runner because of the short-area quickness he has, you have moments like this.

After strong freshmen and sophomore seasons, he struggled the next two. A sports hernia limited him to just four games in 2015 and then there was the bizarre incident involving him and a security officer. Part of it is explained here but here’s what I can gather.

Clement got into some sort fight with someone else off campus. He initially told his family and team that he and a security guard were attacked first and he fought back out of self defense, cutting his hand. The official police report asserted Clement started the fight. Clement was caught in a lie and suspended for one game by the Badgers, the final game of the regular season, before returning to play in the bowl game against USC.

That all sounds bad, and it is, but on the plus side, it sounds as if Clement got his act together after that and has had no off field issues. Personally, I don’t believe it’s as big of an issue as maybe it sounds on paper.

But the injury bug still chases him. The hernia surgery wiped out much of his junior season and hamstring and ankle injuries slowed him up at the start of 2016 even though he missed just one game.

In a class with a lot of talent and names who have been talked about much, Clement presents excellent value in the mid-rounds. The Steelers need a long-term option behind Le’Veon Bell. Going through the draft is a cheaper investment than a free agency knowing Bell is still going to be on the field so often. A guy like Clement makes great sense.

Comparison wise, maybe what Christine Michael was always supposed to be. Lot of parallels there.