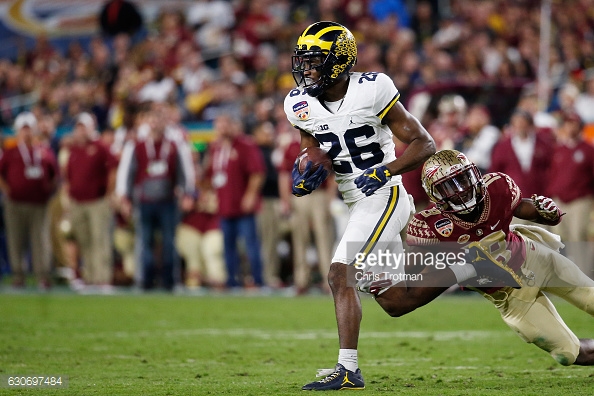 – Plays bigger than his size, impressive vertical and ability to high point the football
– Unique ability to track the football while staying in-phase with receiver, does well in man coverage downfield and plays trail technique effectively
– Fluid player, quick feet and COD, able to mirror release of WR
– Physical, supports the run as force defender, and plays with a competitive edge
– Has ball skills and hands, ability to play pocket and breakup passes and hands to finish plays and pick off passes
– Versatile, wore a lot of hats, able to play inside and out and offer return value

– Size is below average though has decent length for height (31 inch arms)
– Struggles in press coverage, will lack power to stuff big receivers on the outside, and technique needs work
– Vulnerable to opening his hips in press, failing to stay square, and creating release lane
– Doesn’t always maintain leverage, allows release to leverage side (inside release vs inside leverage)
– Bit of a gambler who can get burned, needs to open gate sooner in off coverage
– Has to play cleaner downfield, gets too grabby and suspectible to penalties

Lewis isn’t a big corner but you know my affinity for the vertically challenged players. The guy can still play. He plays big, which is something I look for in undersized cornerbacks, and should jump out of the gym at the Combine. Great vertical.

Watch him get up and high point the football to contest this throw and cause an incompletion. 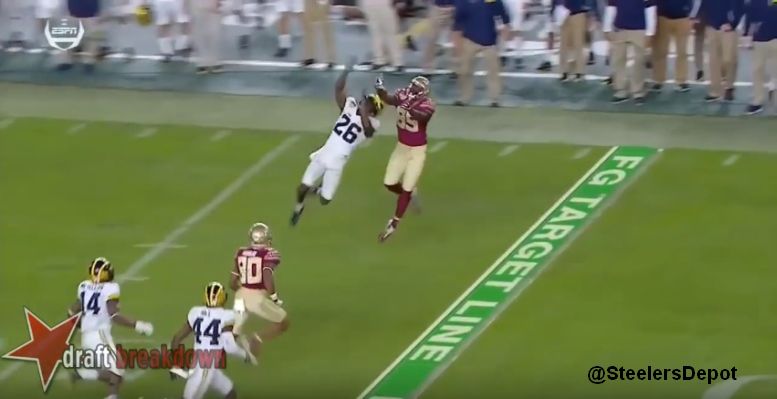 What’s most impressive about him is his ability to stay in-phase when in man coverage while tracking the ball. So often, we see guys look back for the ball and lose their feel for the receiver, creating space, and allowing a big play. Lewis is able to do both. You won’t find a better example than this absurd interception to seal the win over Wisconsin in September.

But he can also come downhill to support the run. Slot receiver in this twin set, tackling Corey Clement in space on this toss play.

Lewis likes to play big and physical to the point where he’s going to have to tone it down in coverage. Has to know when to stop chucking the receiver or he’s going to get flagged, though I certainly appreciate the edge he plays with. No idea how this wasn’t noticed.

Because of his size, most will ticket him to the slot at the next level, where he did spend a fair amount of time at Michigan. I wouldn’t have an issue playing him on the outside generally speaking but in Pittsburgh, of course, the slot is the biggest need. If I’m Kevin Colbert, that’s what I’d draft him for.

Give him a year to sit and learn behind William Gay and then potentially (probably?) become the starter in 2018.

Lewis is a little Eric Murray like from last year though Lewis is projected to go higher. Right now, at least.