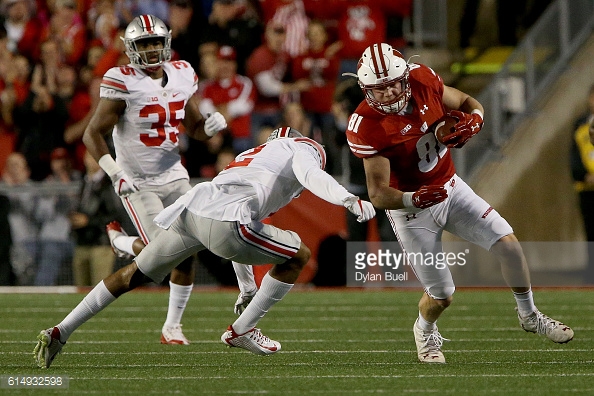 – Very fluid hips
– Sticky defender that plays well in hip pocket of WR
– Serious makeup speed to close gaps
– Smart, instinctive football player
– Mirrors opposing receivers well with ability to change directions quickly without losing speed
– Sound, solid tackler in the open field
– Packs a punch as a hitter
– Can play in the box and support against the run
– Great hand-eye coordination at catch point to combat receiver in the air

– Struggles to get off blocks in run support
– Has a tendency to lock eyes into the backfield when not in man coverage
– Relies on arm tackles at too often. Worked in college, but won’t cut it in the pros
– Often flips hips immediately at the snap, which can leave him prone to inside routes
– Rarely uses hands in press technique
– Small frame that has durability issues
– Just one full year of starting experience at Ohio State

– First Team All Big Ten in 2016 as sophomore
– Finished second on team and sixth in Big Ten with four INTs in 2016
– Redshirted 2014 season due to hamstring surgery
– Missed six games in 2015 season due to hamstring injury
– U.S. All American in High School
– Named Division II’s Ohio state defensive player of the year in 2013
– Finished OSU career with 20 games played with four interceptions and 13 career pass breakups

Coming into the 2016 college football season, Ohio State’s Marshon Lattimore was a guy that I had heard of during his recruiting process in 2013, but since that time I really hadn’t heard a word about him.

But once the season started this past fall, all I heard about was this lockdown cornerback at Ohio State who looked to be a lock for the top 10 of the 2017 NFL Draft.

Fast forward about six months and here we are:  Marshon Lattimore is in the discussion for CB1 in this deep draft class.

Only a redshirt sophomore due to numerous hamstring injuries that forced him to sit out the entire 2014 season and half of the 2015 season, Lattimore has been a late bloomer, but he’s as natural as they come at the position.

Right from the start of my film session on Lattimore, I was blown away by the fluidity of his hips and the ability to mirror receivers all over the field without even needing to jam them at the line of scrimmage.

Often, Lattimore ran better routes than opposing receivers across from him because he was able to quickly diagnose the route the was coming.

At the snap, Lattimore is able to flip his hips quickly and get north with the Oklahoma receiver, keeping himself even with the receiver while never letting him get on top.

Although the play was ultimately ruled an incomplete pass, the redshirt sophomore shows off some serious athleticism and ball skills on the play by laying out at full extension to try and haul in the interception.

On top of being able to run routes with the receiver while flipping his hips in smooth fashion, Lattimore also has some impressive closing speed that I’m not sure any other cornerback in this ’17 class has at their disposal.

One thing I really like about Lattimore is his knack for mirroring receivers right from the line of scrimmage without using the press technique. Sure, he’s up at the line of scrimmage more often than not in Ohio State’s defense, but he very rarely shoots his hands out into the receiver because he’s so confident in his footwork and recovery ability to shadow any receiver in the nation.

Sometimes that can throw off receivers who are so focused on getting a clean release that Lattimore is already one step ahead in coverage.

While Lattimore is an outstanding coverage corner that can seemingly play in any scheme at the next level, the main concern with the Buckeye is his ability to stay on the field.

Dating back to his high school days, Lattimore has had chronic hamstring issues, with one hamstring injury resulting in a surgery after arriving in Columbus in ’14.

After working back onto the field following his redshirt season in ’14, Lattimore was forced to miss six games due to the same hamstring issues in ’15, but fortunately for the redshirt sophomore he was able to stay on the field for all 13 games in ’16, leading to him climbing up draft boards.

At 6’0”, 195, Lattimore has room to add a bit more weight to his frame as the extra weight shouldn’t have much of an impact on his long speed and hip fluidity.

Despite having a small frame, Lattimore appears comfortable in the box, whether that’s on the edge or as a Robber safety.

He doesn’t hesitate to fill lanes against the run and stick his nose in there for stops, nor does he mostly shy away from contact.

Plus, he’s able to sift through the traffic in front of him to find the ball and make the stop.

While I think he has a great shot at carving out a long career at the next level as a true No. 1 shutdown man corner, if things don’t work out for him in that role, Lattimore can have a long, productive career as a nickel corner due to his ability to play man and come up to support the run.

As a redshirt sophomore, he’ll be a project early on wherever he goes, but he should be able to figure it out quickly due to his impressive athleticism, hip fluidity and instincts for the position.