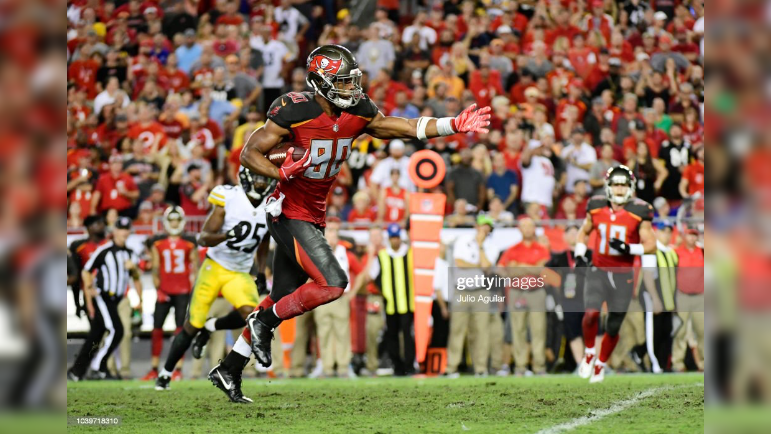 Already loaded on the offensive side of the football, the Cincinnati Bengals are expected to add another intriguing weapon to the pass catching stable for star quarterback Joe Burrow.

Following a surprising release from the Buffalo Bills Tuesday, veteran tight end OJ Howard is expected to land with the Bengals on Wednesday following his visit this morning, according to NFL Network Insider Ian Rapoport.

That was fast: The #Bengals are hosting FA TE OJ Howard on a visit today and assuming all goes well with the physical, he’s expected to sign, source said. The former first-rounder was a surprising cut yesterday and this should come together today.

Howard, who spent five seasons with the Tampa Bay Buccaneers, signed with the Bills as a free agent but wasn’t able to latch on with the AFC favorite. Instead, he’ll get a chance to work with Burrow and an offense featuring the likes of Ja’Marr Chase, Tee Higgins, Joe Mixon, and more, assuming all goes well with a physical.

In five seasons in Tampa Bay, Howard hauled in 119 passes for 1,737 yards and 15 touchdowns, though he missed much of the 2020 season with a torn Achilles injury.

With plenty of experience and versatility offensively, Howard will help solidify the tight end position in Cincinnati for Burrow ahead of the Week 1 season opener against the Pittsburgh Steelers. In the offseason the Bengals lost dependable tight end CJ Uzomah to the New York Jets in free agency and added veteran journeyman Hayden Hurst to try and patch up the position.

Now, with the pending addition of Howard, the Bengals appear fully loaded offensively.

In one career game against the Steelers, Howard caught six passes for 72 yards in a 30-27 loss to Pittsburgh in Week 3 of the 2018 season.