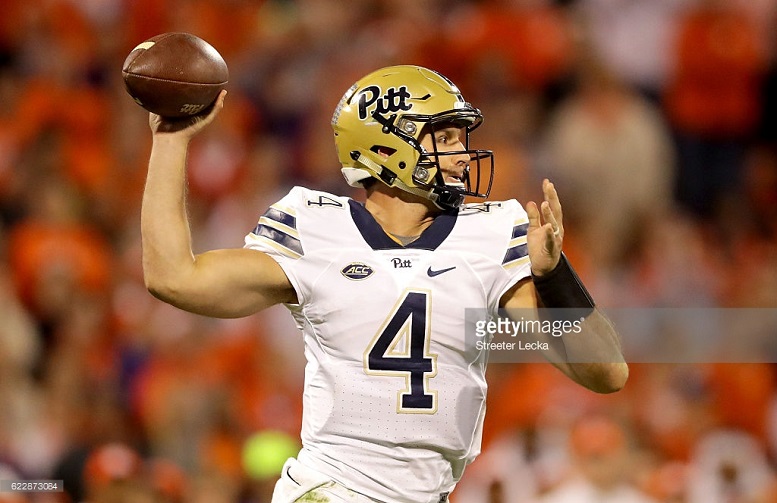 This is a showcase of Pittsburgh quarterback Nathan Peterman.

– Great all-around mobility: evasive movements within the pocket, scrambles well for first downs, and attacks the line of scrimmage on rollouts (forcing defenders to commit to coverage or stopping his potential run).
– Toughness: Stands tall in the face of the heavy pressure and fights for first downs when running the football.
– Cautious passer who doesn’t force the football into tight windows. If his reads are cloudy, he is quick to tuck the ball and get positive yardage with his feet.
– Good football IQ: demonstrated ability to quickly identify the defensive scheme and take advantage
– Efficient and compact throwing motion with an over-the-top release. His delivery improved from 2015 to 2016
– Experience in a pro-style offense: comfortable taking snaps from under center and performing full-field reads/progressions
– Uses eyes to hold linebackers and move safeties
– Big Hand Size: 9 7/8 inches

– Struggles with accuracy on out-breaking routes
– Doesn’t take a ton of shots downfield
– Inconsistent footwork when throwing; sometimes has “busy feet” as he begins his motion
– Eyes and feet tend to get out of sync when scanning the field, sometimes leading to off-balance throws.
– Peterman did not perform any straight drop-backs when starting from under center; only play-action or sprint-outs.
– Lax ball security when running the football; leading to several fumbles
– Sometimes leaves the pocket before allowing a play to develop; potentially missing big-play opportunities
– Lacks elite arm strength
– Takes unnecessary hits by not sliding on running plays

– Nothing about Peterman’s game is super flashy or dynamic. His arm strength isn’t remarkable, he doesn’t have blazing speed, and he occasionally has lapses in accuracy. However, on the whole, there are a lot of positives about his style that suggests a hidden potential that could blossom in the NFL.

First, although he was sometimes early in his decision to tuck the ball and run, this should not imply that he was a skittish passer in the pocket. Instead, if Peterman sensed that his receivers were going to break open, he had no problem standing tall and delivering a strong pass. Second, it was easy to recognize that he took his film preparation seriously and acquired a nuanced understanding of opposing defenses. He trusted his pre-snap reads and was ready to adjust if things changed post-snap. Finally, Peterman’s athleticism will undoubtedly ease some of the growing pains that are sure to come at the next level. He can extend plays behind the line of scrimmage and can take advantage of a defensive breakdown. Examples of these positive attributes are shown below.

Here against Clemson, Peterman exhibits confidence in the face of heavy pressure and a good understanding of the Tigers’ defense. Pitt lines up in an empty set against Clemson’s Cover 2 look. On the snap, Clemson brings both the Sam and Will linebackers off the edges; signaling to Peterman that he has to get rid of the ball quickly since he only has 5 men protecting against the 6-man rush. He stays calm, immediately gets his eyes to the short side of the field and locates the corner. Because he knows that the corner will likely cover the flats in Cover 2 (and therefore squat on the slot receiver’s speed-out), he anticipates an open window and throws a nice catchable ball to his outside receiver running a vertical down the sideline. The ball is thrown on a shallow trajectory before his receiver turns around, thereby preventing the safety from becoming a factor in the play. Great recognition and perfect execution by Peterman, making a big-play look easy:

In this next play against Georgia Tech, Peterman again demonstrates poise in the pocket and good recognition/understanding of the defense. Pitt is running Double-Posts off of play-action against GT’s Cover 1. GT only brings a 5-man rush against Pitt’s 7-man protection, so Peterman knows he should theoretically have enough time to get the ball out. Immediately after the play-fake, he snaps his head/eyes to the safety and reads his movement. He remains calm in the pocket and when the safety honors the Inside-Post by staying in the middle of the field, Peterman rips a pass to his outside receiver, through a tight red-zone window, for a touchdown. Accurate ball placement away from the corner and great read on the throw:

Here is an example of Peterman’s athleticism and ability to extend plays with his feet. Pitt is running a bootleg to the wide side of the field. Although he is a little rushed in his play-fake; Peterman still does a good job of flipping his head back towards the field when he exits the mesh-point with the running back, he keeps both hands on the ball during his rollout, and keeps his eyes downfield. Additionally, the crucial feature that makes this play successful is the way that he attacks the line of scrimmage and forces the defense to commit to covering either the run or the pass. Peterman maintains a readiness to throw and pulls the trigger as soon as the defender tries to stop his potential run. Great play to pick up the first down:

Lastly, this plays against Virginia Tech illustrates Peterman’s quickness to tuck the ball and run if his reads are cloudy. Pitt is running an RPO and it’s difficult to tell whether he makes a bad read or if there was a blown assignment by someone else. Regardless, as soon as he feels uncertain, Peterman cuts his losses and tries to pick up positive yards on the ground. He shows good running ability, but also poor ball security (this is his second fumble of the game). He is fortunate he didn’t turn the ball over here, but still a good play overall:

– Overall, I think the best way to describe Peterman’s skill set and playing style is to compare him to a quarterback like Alex Smith of the Kansas City Chiefs. Like Smith, Peterman is cautious with the football, doesn’t take a ton of deep shots, and is a threat to run if his first few reads aren’t open. Neither player has any serious flaws, but both are relatively uninspiring in their play. Peterman is (obviously) not as polished as Smith and will surely benefit from a few years of learning the NFL game from the sideline, but I think that eventually he could develop into a steady and serviceable starting QB if he lands in the right system.