– General inconsistency: accuracy, footwork, ball placement, throwing motion, field vision
– Pro-Readiness: never took snaps from under-center or called plays from a huddle
– Lazy ball security in the pocket: tended to let his non-throwing hand lose contact with the ball has he surveyed the field
– Carried the ball very low on his chest during drop backs; increasing his release time and negatively affecting his accuracy
– Struggles on out-breaking routes: tends to throw low on speed-outs and curls, very sporadic on shallow crossers

There is a lot to like about DeShone Kizer’s game; he’s a dual-threat with great physical attributes, excellent instincts, and tons of raw potential. He makes some genuinely spectacular plays that hint at a great NFL future. However, for Kizer to develop into a true franchise quarterback, he must become more consistent in the fundamentals of the position. He often relies too much on his natural talent and not enough on proven techniques, leading to inaccurate passes and missed opportunities. Below are few examples of both the good and the bad:

Kizer’s arm strength and deep-ball ability are some of the first things that jump out on film.  Regardless of whether he is passing from the pocket or on the run, he can be deadly on verticals down the sideline or deep posts down the middle.  Here is a clip from Notre Dame’s game against Michigan State where Kizer hits his receiver perfectly in-stride from the opposite hash, on a throw that travels 50 yards in the air:

Kizer’s athleticism and deceptive quickness also immediately stand out. He repeatedly showed that he could beat defenders around the edge for first downs and, if necessary, bulldoze his way into the end zone. On this 29-yard run against Texas, he showcases both his speed and strength by breaking a tackle to start the play and then outrunning a defender for the score:

Despite playing in a spread offense, Kizer showed he could throw from small pockets into tight coverage windows.  He needs to become more consistent, but passes like this next clip against Texas illustrate his NFL potential.  With the rush closing, he stands tall and drops a pinpoint pass between three defenders.  This is a throw that will draw the attention of a lot of pro scouts:

On the negative side, Kizer’s mediocre fundamentals sometimes cause accuracy and ball placement problems. For example, rather than initiating his throwing motion from the same position on his body each play; the starting point of his delivery regularly fluctuates between waist and chin-level. Although this may seem like a trivial or nit-picky criticism, it is actually hugely important, given the countless other variables that can affect the accuracy of a pass.  Minimizing variance in one’s throwing mechanics is an essential element of precision passing. A comparison of his different starting positions is shown below: 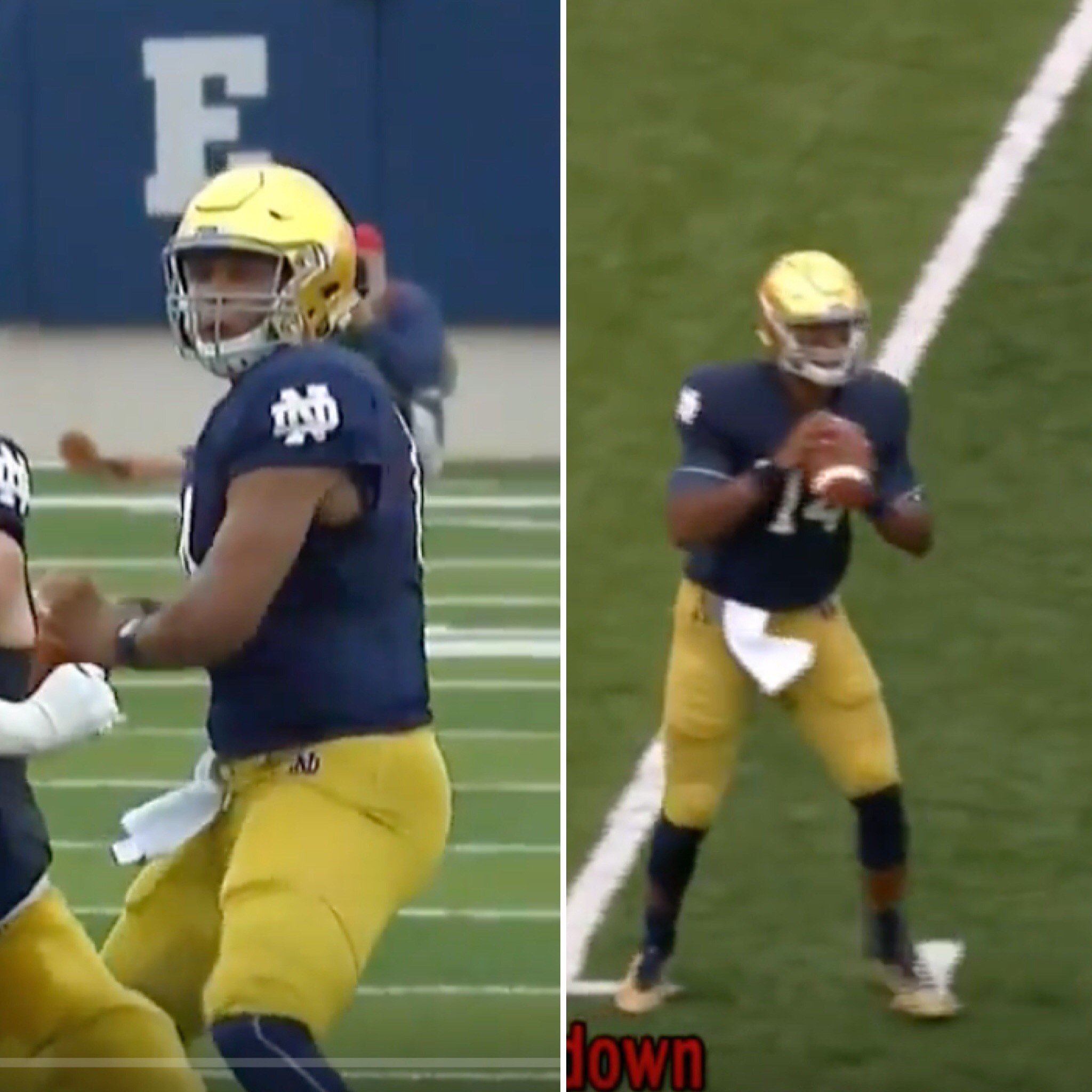 Second, Kizer tends to “overpower” his throws when he gets deep into his progressions.  This problem, which is analogous to a golfer over-swinging on a drive, is likely created by uncertainty in his reads or a haste to get the ball out on time. Trying to throw too hard causes Kizer to over-stride and tense his body, leading to inaccuracy. This is a more difficult habit to break since it is likely a subconscious, split-second decision during the play.

Ultimately; however, the primary cause of Kizer’s accuracy problems is related to his footwork. Because his arm is so naturally talented, he sometimes tries to flick the ball out to his receivers without setting his feet.  While this issue isn’t as glaring when passing down the middle, it becomes painfully obvious when throwing to the sidelines. For example, in this play against Stanford, Kizer badly overthrows an open shallow crosser, even though he has the time and space to set his feet.  These are throws that must be completed at the next level:

Kizer’s footwork is again the cause of a bad incompletion in this next clip against Duke. Although he is on the opposite hash and is targeting a deep over-route that is moving away, he steps straight down the middle as if he’s throwing a dig or seem; leading to an off-balanced overthrow. Also, notice how his body is falling away from the direction of the pass:

Some of Kizer’s flaws (such as footwork) can be improved with practice and mental discipline. Even with diligent training; however, it will still be a major challenge not to revert to his natural playing style when faced with the speed and pressure of an NFL game. If he can permanently change some of these bad habits, or at least become more consistent in his mechanics, he has a much better chance at success. Although Kizer will certainly be a developmental project for whichever team drafts him (given his lack of experience in a pro-style system and general inconsistency), I think that his high-upside could outweigh the growing pains that he is likely to experience early in his career.

Games Watched: at Texas, vs Nevada, vs Michigan State, vs Duke, vs Stanford, vs Miami, at Syracuse, vs USC (2015)