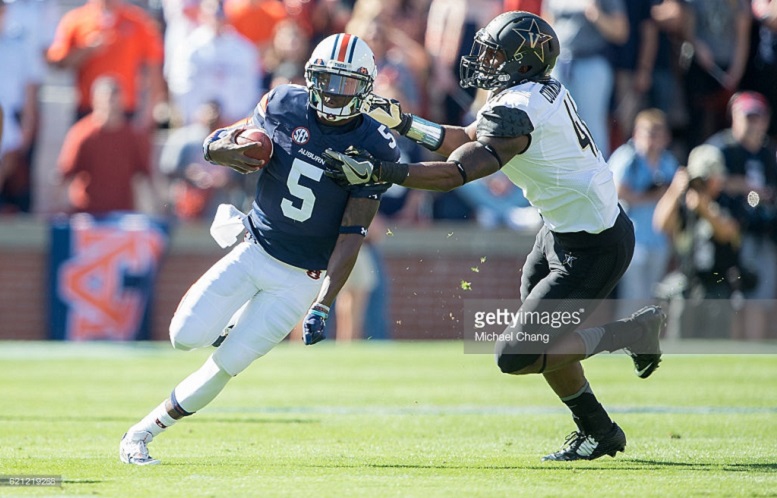 Standing at a slender 6’4 and weighing just 230 pounds, Vanderbilt inside linebacker Zach Cunningham has the ability to fly all the over the field. Not literally of course, but with his great instincts and athleticism, Cunningham comes as close to flying as one can get.

Watch how Cunningham blows up this late fourth down play against Georgia earlier this season, a game in which Cunningham racked up 19 total tackles.

Facing 4th and 1 with the game on the line, Georgia is in 21 formation with their full back and tight end in to seal the edge.  In most cases, a play call like this should be expected to pick up at least a yard, but with Cunningham on defense, nothing is a guarantee. The Vanderbilt linebacker is impressively able to side step the pile and still have time to wrap up the back in the backfield. Not a simple task for any linebacker but one that Cunningham makes time and time again.

Driving Cunningham off the line is not a suitable solution either, as the linebacker is able to fight off blocks to limit the opposing back for little to no gain on plenty of occasions. By diagnosing plays immediately after the snap and knowing where he needs to be, Cunningham is a master calculator on the field.

Watch Cunningham impressively fight off a block here against the Florida Gators. The Gators send right guard Tyler Jordan to seal Cunningham off at the second level, giving the Gators’ back what looks to be space down the right sideline. Cunningham though fights off Jordan and launches to stop the back at the line, single-handedly stopping the potential for a big play.

Cunningham’s instincts and awareness are not just limited to run defense either. The Vanderbilt linebacker is effective at dropping into zone coverage, and though Cunningham has no interceptions to his name, he has been close quite a few times.

Here is Cunningham split out wide against the 6’6 Tennessee tight end Ethan Wolf. As Cunningham moves slightly to his right, Wolf hooks right at the goal line. With the ball now on its way to Wolf’s hands, Cunningham breaks on the ball, just falling short of what should be an interception.

Due to his intangibles and size, Cunningham is not a player that will require substitution on passing downs. Whether it be to drop into a middle zone, cover the flat against a running back or even man to man against other tight ends, Cunningham fits the bill of a three-down linebacker.

For all the great parts of Cunningham’s game also comes a very important flaw – tackling. I know it may seem surprising that the SEC’s top tackler’s greatest weakness is tackling itself, but this is the case. Cunningham’s various game-tapes are filled with many missed tackles, with a large quantity being sloppy arm tackles or tackling at too high of a pad level. Here’s just one example from the many.

More of the same from Cunningham, great instincts and speed to ball but he cannot finish. With a clear shot at the running back, Cunningham aims high instead of low, grabbing a piece of the back’s facemask in the process. Perhaps due to his lack of size, Cunningham’s tackling fundamentals are the linebacker’s greatest weak spot.

What NFL scouts and executives would like to see from Cunningham is more of this.

Cunningham bends his knees in a squat position, generating power and then drives into his target. As a result, the Missouri running back Ish Witter is stopped short of the end zone.  More one on one tackling like this from Cunningham and perhaps instead of 125 total tackles, he approaches 150 and is a safe bet as a top 15 selection.

While Cunningham’s instincts and awareness project as first round material, his tackling does not. As a result, the Vanderbilt product could slide down some draft boards. I do not envision Cunningham being sought after by the Pittsburgh Steelers, even with Lawrence Timmons due to be a free agent come March. Instead, Cunningham could see himself as a possible candidate for playing as a Will linebacker in a 4-3 at the next level. Look for a team desperate to fix their run defense to snatch Cunningham early.

Games Watched: vs Georgia, vs Missouri, vs Tennessee, vs Florida, vs South Carolina